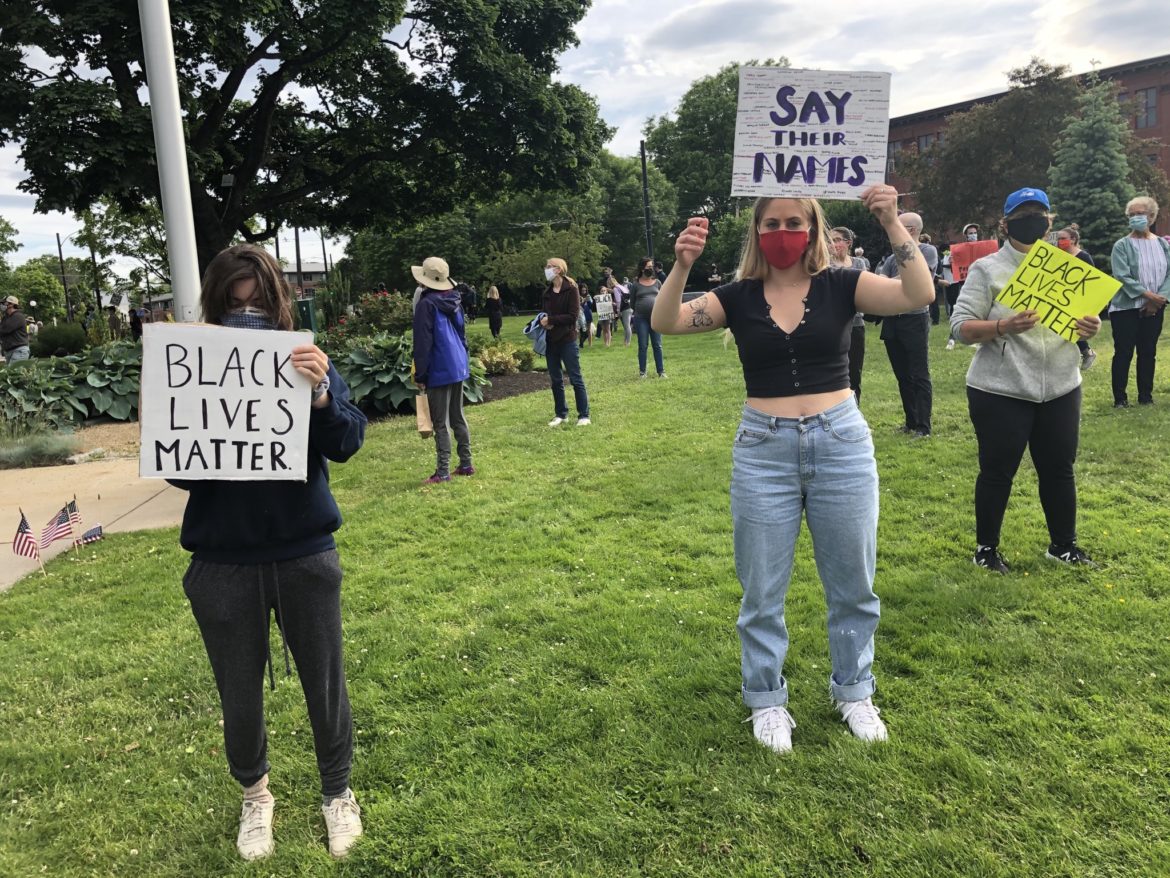 Some of the hundreds of people who participated in the Vigil for Black Lives in Watertown on Tuesday evening.

Hundreds of people lined streets of Watertown Square Tuesday evening for a vigil for George Floyd and other African-Americans killed by police around the nation.

Watertown Citizens has held vigils in the past, including for Black Lives, but none drew crowds as large as Tuesday’s event. People stood on the sidewalks around the Watertown Delta, and along Main Street down to Church Street (near the Armenian Museum of America). Estimates ranged from 400 to more than 500 people.

People held signs saying “Black Lives Matter,” some had the names of those killed by police, and one said, “Stop Killing Us.” During the event, attendees kneeled for 8.5 minutes, the amount of time that the police officer had his knee on George’s neck.

“Why so many? Lots of reasons, likely different ones depending partly on race,” Kemp-Benedict said. “I’m white. White people aren’t forced to be aware of race every day, but when an event of horrific injustice happens like George Floyd’s murder, it reminds us that some people aren’t free to see police as protectors of their safety.

“We feel sadness and outrage, and we want it fixed, NOW. So we pick up a sign or take a knee to mourn together and to say ‘Pay attention and fix this.'”

Kemp-Benedict added that the George was just the latest case of racial injustice, pointing to Breonna Taylor who was killed in her home by police in Kentucky and Ahmaud Arbery who was killed by a group of men in Georgia as he was jogging.

“So, I think people came to the vigil anguished and outraged over recent events and a long history of entrenched racist patterns in our society, but still hopeful enough to show up together,” she said.

The group emphasized that the event was to be a “peaceful vigil, following public health safety guidance,” Kemp-Benedict said. The event ended without incident, unlike other gatherings in Massachusetts and around the country. The Watertown Police Department even thanked the group on its Twitter feed:

“On behalf of the WPD Chief Lawn would like to thank all who attended the peaceful vigil last night. Chief Lawn attended & was impressed by the over 500 people. We are proud of Watertown and our community’s commitment to advocate for social justice. Thank You!!!”

On behalf of the WPD Chief Lawn would like to thank all who attended the peaceful vigil last night. Chief Lawn attended & was impressed by the over 500 people . We are proud of Watertown and our community’s commitment to advocate for social justice. Thank You!!! @watertowngov pic.twitter.com/sIYiQFn8gq

Eric Kemp-Benedict, Tyler’s husband and part of WCBL, said he cannot speak for everyone at the event, but said that from what he heard people were happy to see that so many others had similar feelings about recent events.

“I heard that from POC [persons of color] and non-POC both,” he said. “They also seemed pleased/happy/relieved to have something they could go to in their town/neighboring town.”

For at least one group, however, the event ended on a sour note. Casey Halle and some of her friends were hanging out in Watertown Square about 15 minutes after the conclusion of the hour-long event when a car stopped.

“A man in a white car started yelling at the remaining protesters,” Halle said. “He called the crowd, including a young black girl, the n-word multiple times, and said to a very peaceful showing if we even touch ‘his city’ he would ‘f— us up.'”

Halle called the incident an isolated one during what was a “completely peaceful vigil.”

“It was sad to hear, but also a great reminder of why something like this is so relevant and important,” Halle said.