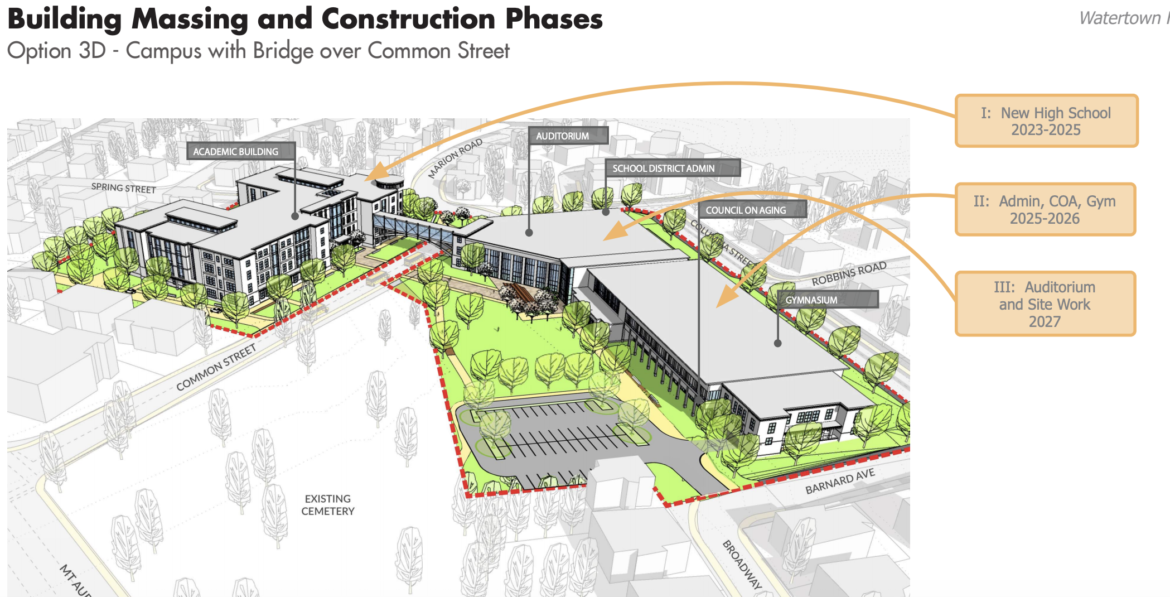 A rendering of what a new high school could look like if it's built on the current site and the Phillips School site. In this option, a bridge would link the buildings on the third floor.

The School Building Committee saw what a new Watertown High School could look like, including 3-D renderings of buildings that could be built on the two proposed locations for the school.

On Wednesday night, Scott Dunlap from Ai3 Architects presented the latest renderings for the high school project during an online meeting.

Two options had a four-story main academic building on the property where the Phillips School and Senior Center currently stand, and the gym and auditorium on the current high school site. One would have a bridge over Common Street, and the other would not. Also located on the current site would be a new district administration office (now housed in the Phillips) and a new Senior Center to replace the one next to the Phillips.

The third option would put the school where the Victory Field stadium and baseball field are now, and a new stadium would go on the site of the current school. In that scenario, a new spot would need to be found for a baseball field, which has yet to be identified.

With either location, a significant amount of the parking would be located underneath the building, For the options at the current site, vehicles would enter from the corner of Barnard Avenue and Broadway (where the current entrance to the staff lot is located). Some open-air parking would be located in that area, but the majority would be underneath the building. Dunlap said there might be an exit only onto Common Street from the garage, and a small amount of surface parking would be available next to the new academic building.

With a school on the Victory Field site, vehicles would enter from Orchard Street, drive to the other end of the school (the width of the Victory Field property) where a small amount of surface parking would be available. The majority of the parking would be located under the building. The lot would be on the ground level, with the gym and auditorium built above on the second floor, Dunlap said. Vehicles would be able to come out the other side and leave through a second driveway onto Orchard Street. Dunlap envisions the second driveway being exit only, plus deliveries.

Looking at the scenarios using the current site and Phillips School, School Committee Chair John Portz said he is concerned about the connections between the two buildings.

“This is a 60 to 70 year investment for the community. It is going to be the signature building for Watertown. We need to make sure that it has a look of that,” Portz said. “What kind of connection will there be between to campuses? The drawings show bridge across there. That may work.”

One option would be to build a bridge between the two building, which would be located on the third floor, Dunlap said. It would need to be that high to allow tall vehicles and loads to pass underneath.

Another option would be to have students cross Common Street between the two buildings. Dunlap said there is a possibility of having a raised crosswalk linking the two sides to slow traffic and make the link more pedestrian friendly.

Lori Kabel, director of Public Buildings, said she does not like the idea of having students crossing Common Street. She is familiar with the area because her office is located in the basement of the Phillips Building.

“Since I’ve been here I’ve said I am going to die crossing this road. Cars go really fast. It’s a really dangerous road,” Kabel said. “High School students are not watching where they are going. They are on their phones. I do not like this option for the safety of our kids.”

A resident asked if building a tunnel under Common Street was an option. Dunlap said he has worked on projects with tunnels, but it requires an elevator to go down to each end of the tunnel to make it handicap accessible. Also, there is a high-pressure water main underneath that section of Common Street, Dunlap said.

Putting the high school on the Victory Field stadium site would be a tight squeeze, Dunlap said. It could be completed in two years and students would not have to attend a school under construction.

“We were concerned — it is fairly constricted area,” Dunlap said. “The amount of street frontage would also be restricted. The advantages would only be for the location on this site. It doesn’t involve any (construction) activity at existing high school site.”

Building it on the existing site would mean building the school in phases, starting with the new academic building on the Phillips School site. This is expected to take two years. Dunlap’s timeline would then construct the gym, administrative offices and Senior Center next, which would take about a year, and finally the auditorium. The whole project would take about four years.

The project will be built with help from the Massachusetts School Building Authority (MSBA), but the state does not cover all parts of the project. Dunlap said that the Town would get reimbursed for construction of a bridge between the buildings. If the school is built on the Victory Field site, the state would not pay for the demolition and hazardous material abatement on the current site. It would be reimbursed if the school is built on the site.

The MSBA does not reimburse for parts of the building that are not part of the school, including the administrative offices and the Senior Center.

Town Council President Mark Sideris, who is chair of the Building Committee, said that the district has not yet reached out to neighbors about the plans because Wednesday was the first time that the committee had seen them.

A community meeting will be held later in June, Sideris said.

“We are intending on doing at least one or two more community forums, so people have the opportunity to see them,” Sideris said.

Owner Project Manager Tim Bonfatti, from Compass, said that the goal is to narrow down the options to one by September of 2020. Then architects can put together a schematic design, which will include a detailed cost estimate. Dunlap does not have an exact cost estimate, but said that prices of building the school on the current site would be around $200 million.

The intent is to put the project on the MSBA board’s January agenda, Bonfatti said. If the MSBA board gives its OK, the Town will then go to the voters sometime in 2021 for approval of the Town’s portion of the funding.