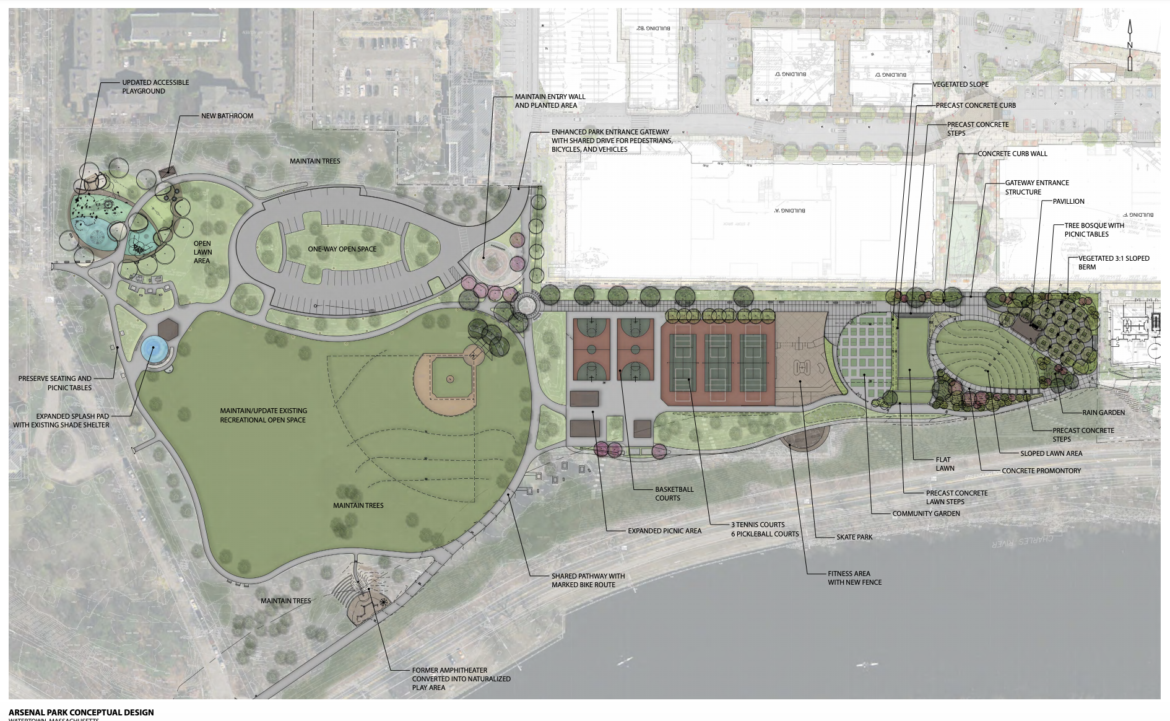 A drawing of the proposed renovation of Arsenal Park. This shows the 25 percent design plan, which the Conservation Commission approved in 2019.

Town officials set a goal of completing the renovations of Arsenal Park by the end of 2021, and part of the work that will be done will be to fix the sinking area of the park near the playground, driveway and parking lot.

On June 3, the Conservation Commission saw a timeline that, if accomplished, would enable to project to be planned, bid and constructed by the end of the construction season in 2021.

Work on the eastern section of the park, near Arsenal Yards, was approved by the Town Council in May, which will have a lawn area, a pavilion and a stand of trees with tables and seating underneath. That is Phase A of the project. Phase B would be the rest of the park, which includes the grass area/playing field, playground, tennis and basketball courts, community gardens and the skate park, said Senior Planner Gideon Schreiber.

The project also includes creating rain gardens to help collect storm runoff from the park, and prevent it from flowing into the river, said Conservation Commission Chair Leo Martin.

In parts of the park the ground has began to dip, most dramatically near a popular feature.

“The playground has the most substantial sinking, so much that it is is almost not going to be usable this year,” Schreiber said.

The playground could be moved across to the other side of the pathway which runs next to it, Schreiber said.

Several potential causes for the sinking have been identified that date back to when the land was part of the U.S. Army’s Watertown Arsenal, including old utility tunnels, old stormwater system parts, and there were “a whole series of old, 1818-ish houses that got torn down as part of the redevelopment of the site,” Schreiber said.

The Conservation Commission has already started the planning process for the park, which falls under its control because it is close to a body of water — the Charles River. They approved a 25 percent design for the project in 2019, but a more detailed plan would come at the 50 percent design, Schreiber said.

“The 50 percent plan is typically the final plan,” he said. “The 90 percent gets all the details, and 100 percent is going to bid.”

The timeline calls for getting the Conservation Commission to approve the 50 percent design by late August, and the construction bid documents (100 percent plans) would be finished by December 2020. The project would be put out for bid, and if a the bid process is successful, construction could start in March 2021 and be completed before winter when the construction season ends.

The Conservation Commission would be asked to approve a permit to build in the area within 200 feet of the river in December.

Martin said input should be gathered from groups in town who use various amenities of the park, including the community garden, the skate park and the playground. He asked for volunteers from the commission to attend those meetings to listen to the discussion and report back.

The consultant that the Town worked with on Phase A of Arsenal Park, and other park projects, is CDM Smith. They do not have a formal contract, yet, Schreiber said, but they have already been out at the site to start looking at the project.

One of the first steps of the project will be doing a geotechnical study of the park to determine why areas are sinking, Martin said.