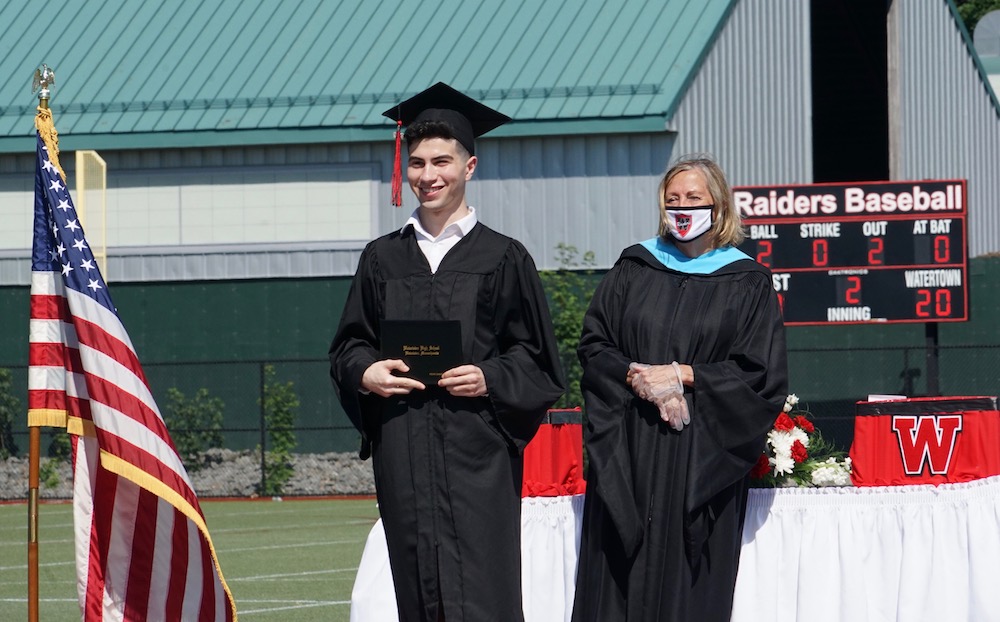 A Watertown high School senior smiles for photos after getting his diploma during a unique graduation ceremony for the Class of 2020.

Watertown High School’s seniors claimed their diplomas in person at Victory Field on Saturday, but that was about all that was normal about graduation day for the Class of 2020.

The atmosphere around Victory Field because the frenzy of activity was just spread out throughout the day as Watertown Public School officials put on a socially distanced ceremony to comply with the state’s COVID-19 guidelines.

Each half hour a set of cars pulled up, the graduate stepped out and walked up to a small stage where Principal Shirley Lundberg waited with a diploma. Meanwhile, the family could stand along the small fence along the baseball field to cheer and take photos.

“It’s a little different the way they did it,” said graduate Cameron Carr, who said last week’s Rolling Rally was the highlight of the graduation activities in the COVID-19 era. “That was great. I wasn’t going to go but decided to do it at the last minute. They should do that every year.”

After getting their diploma, students got to take off their mask and have a picture taken by a professional photographer. Then they went to a table where they got a gift bag including a program, a water bottle and awards, said Linda Tracy the administrative assistant with the WHS Guidance Department.

“If they got an academic award, sports award or any award we give them that, since everything was announced virtually,” Tracy said.

Only a handful of school officials took part in the ceremony. The guidance councilors read out the names. Principal Lundberg, who is retiring this year, stood on the small stage. Superintendent Dede Galdston and Assistant Superintendent Theresa McGuinness stood nearby.

“It’s going well,” Lundberg said after the first group of students. She had hopes of finishing shortly after 2:30 as she stood on a hot and sunny Victory Field at about 10 a.m.

The ceremony and the speeches given by the valedictorian, salutatorian and class president will be compiled into a video and put on the Class of 2020 graduation website, Lundberg said. The site will also have the awards ceremony, a video featuring messages from members of graduating class, and one made by the faculty and staff. Click here to go to the Class of 2020 website.

Before making their way to Victory Field, the cars gathered at the parking lot of the Department of Public Works Facility, just next to the field, said Watertown Police Officer Kerry Kelley, who helped plan the logistics.

After they got out at the field, there were arrows and boxes on the ground for parents to family to follow.

“We wanted to organize it so that it is socially distanced, but make it feel normal,” said Kelley, who is the WHS School Resource Officer. “Safe but symbolic.”