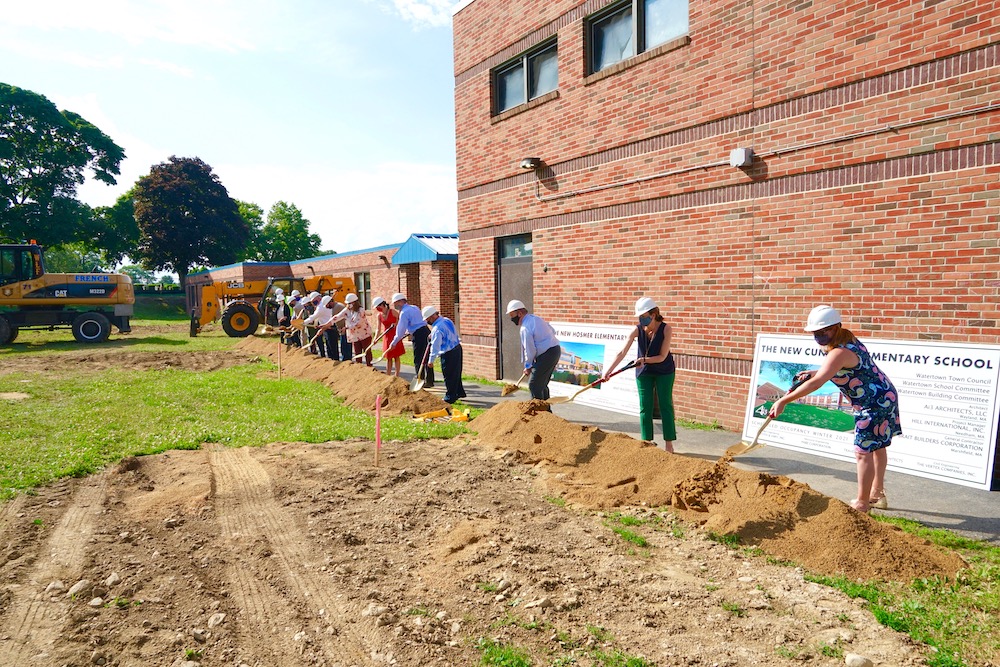 Watertown school and town officials put shovels in the ground at the official start of the construction project Cunniff Elementary School. The ceremony also marked the beginning of the Hosmer School project.

Standing next to the first of Watertown schools to be torn down and replaced with a state-of-the-art facility, Watertown School and Town officials celebrated the beginning of what will be several years of construction at school sites around town.

In the next few years, a major renovation with an addition at Lowell Elementary School will also take place. The three projects, Town Manager Michael Driscoll said, will be done within the Town’s budget, and without a Proposition 2 1/2 override or debt exclusion.

Watertown has also started working with the Massachusetts School Building Committee on the construction project planned for Watertown High School, which will likely result in a new school.

Dede Galdston noted that the planning for the new elementary schools started three years ago, about the same time that she began working as Watertown’s superintendent. Though she added that discussions of replacing the Town’s aging schools began years prior to her arrival.

“Today, we officially mark the beginning of the building that will truly be building for the future,” Galdston said. “I am so proud of the work that has been accomplished and I am so excited that we are going to have the buildings that are going to prepare our students for their futures, not our pasts.”

Town Council President Mark Sideris said he has worked on several building projects in his time on the Council, including school renovations, and building the new Public Works Facility and Police Station.

“We did all kinds of work, but this is my most exciting experience, because the benefits we are going to give the children of the community are going to far outweigh anything we have done before,” Sideris said. “And the taxpayers of this community should be proud that we are working diligently to give this community the first two Net Zero, LEED Gold schools in the state, from what I can gather.”

The Cunniff and Hosmer will be green schools, producing enough energy from solar panels to power the school, and will be built with sustainable practices that qualify them for the Leadership in Energy and Environmental Design (LEED) Gold standards.

Driscoll thanked the Town Council for approving the $103 million in loans to pay for the work at Cunniff and Hosmer. He also credited the School Building Committee for overseeing the project, as well as the designers from Ai3 Architects. Driscoll commended Architect Scott Dunlap for being one of the best contractors he has ever worked with during his 40-plus years working in Watertown.

“(The Committee members) have gone beyond, beyond, beyond,” Driscoll said. “And working with them is an individual … Mr. Scott Dunlap — he saw the dream that Watertown wanted to do and he made this dream come true.”

Dunlap said the Town should be proud of being able to create the two Net Zero, LEED Gold schools.

“I think a lot of work has been done,” he said. “It’s almost like the easy part is ahead now, getting them built.”

By building new schools, the Town will have some features that could not have been provided if School officials had decided to renovate and add on to the current ones, Dunlap said. One feature is the mix of small and large spaces for students to learn, one of which is called a learning common —which can accommodate large groups or multiple smaller groups, and are technology ready.

“We couldn’t have achieved Net Zero with an old building. We could have never got the more compact footprint that allows us to have more green space [and open space], ultimately,” Dunlap said. “We couldn’t have gotten some of the indoor educational pieces and components like the learning commons. There just is no comparison.”

Construction crews have already started the preliminary work at the two school sites. By the end of July, Dunlap said, the current Cunniff School will be torn down, and the section of Hosmer School where the auditorium and preschool were located will be mostly demolished.