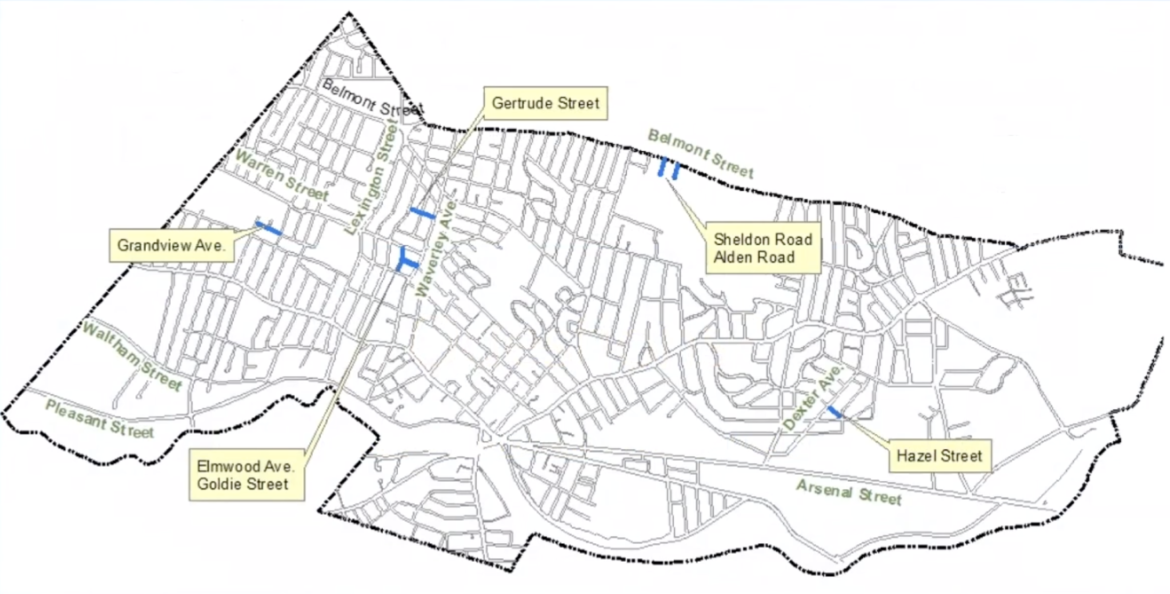 The roads in Watertown proposed to be repaired in 2021.

The Department of Public Works recommended that seven roads around Watertown be reconstructed during the 2021 construction season.

The list of roads to undergo full reconstruction, including sidewalks, was presented to the Town Council’s Public Works subcommittee on Sept. 24.

Town Engineer Matt Shuman explained that the roads were chosen were in the greatest state of disrepair. The decision is also based on a number of factors, including the Town’s road condition inventory, which ranks roads from 0 to 100, and whether the roads need to have utilities (water, sewer and natural gas) replaced.

“We look at inventory, the windshield surveys [where DPW employees drive around looking at roads}, and maintenance records. We make sure we not do a road that is about to do sewer replacement or gas main replacement,” Shuman said. “And we do consider resident input. That does give us a heads up for what to look at.”

Councilor Lisa Feltner asked about some roads in her district (District B). She wanted to know on Chester Street would be on the repair list, and noted that the water and sewer pipes were replaced in 2013 and the gas main was replaced in 2015. Shuman said he would look into it.

Also, Feltner said Irving Street near Arsenal Street is in bad shape. Shuman said he is aware of the condition of Irving, but said that it has been delayed because an MWRA water pipe from Newton through Watertown may need to be replaced but a decision has not been made yet.

The number of streets is also limited by the funding for road repair. Until 2009 the Town did not devote extra funding for road repair, said Council Vice President Vincent Piccirilli. It only used the Chapter 90 funds provided by the state (Watertown will receive $746,351 in FY2021 according to the state). Now the Town Council budget includes an additional $2.5 million for road and sidewalk repairs, Piccirilli said.

Other roads will receive other treatments to extend their lives, Shuman said. Treatments include mill and overlay treatment, where the top layer of asphalt is scraped up and laid back down, Shuman said, and roads beginning to crack will be sealed.

The streets scheduled to be repaired will, in most instances, also have new sidewalks on both sides with granite curbing, Shuman said. For some roads that will mean a narrowing of the roadway.

Councilor Anthony Donato said he has heard concerns from residents about whether emergency vehicles can make it down the narrower roads. Shuman said the Town’s policy for most roads is a 24-foot-wide roadway, including 7-foot-wide parking lanes on both sides. This is big enough for emergency vehicles, and he added that the DPW checks with the Police and Fire departments before approving a road design.

Shuman said some roads may not have enough room, or may have obstacles such as trees, that prevent sidewalks on both sides.

A recent addition to the Road Program is the long-road program. The Town will be working on Waverley Avenue and Shuman said. When Irving Street is done, it will likely be under this program.

The Public Works subcommittee voted 3-0 to recommend the list of roads to be approved by the full Town Council. The projects are expected to go out to bid in December and work to start in the spring.

Another road that will be repaved next year is Lexington Street, where National Grid has replaced a gas main. Shuman said that the work will be paid for by National Grid, and will start after the winter so that the soil where the new gas main was placed can settle.

Also, more planning will be done next year for the redesign of Mt. Auburn Street, Shuman said.