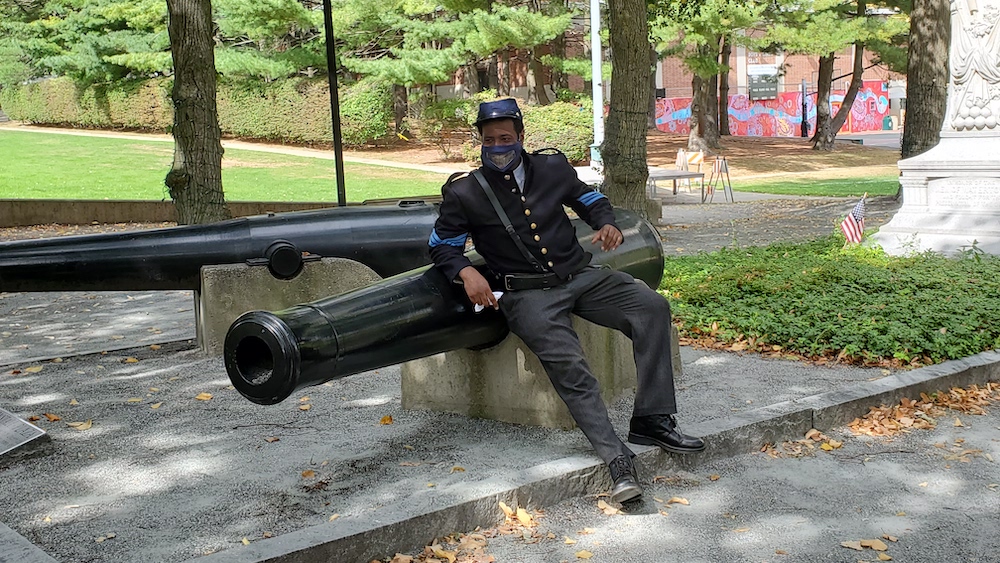 Charles Lenox, played by Kadahj Bennett, talks about his time in the Massachusetts 54th Infantry during the Civil War. The performance is the first Moving Play presented by New Rep Theatre.

Visitors to Watertown Square may have recently noticed an enthusiastic, precocious and out-spoken young man wandering around the area. Charles Lenox, or Kadahj Bennett portraying Lenox, will gladly share his views about the major issues of his time — the 1860s — many of which are familiar to people today.

The performance, called the Charles W. Lenox Experience, is the first of New Repertory Theatre’s Historical Moving Plays, and focuses on a real Watertown resident during the time of the Civil War.

The play runs on Fridays, Saturdays and Sundays through Nov. 18, 2020.

Lenox was a real man who ran a barbershop with his father in Watertown Square which was located next to the old Town Hall, in a building that stood where Stellina restaurant operated.

Director Michael Ofori said the play is intended not only to entertain people and teach them about the Town’s history. With the discussion of racial injustice that has arisen during the COVID-19 pandemic, Ofori said he hopes that audiences also think about the present day.

“What aspect of Charles Lenox’s life can be instructive to people today?” Ofori said.

As an African-American man, Lenox tells the audience about how he was torn between keeping his father’s successful barbershop going and joining the Union Army’s 54th Massachusetts Infantry Regiment (the all-Black unit portrayed in the movie Glory).

When the war broke out, Lenox and his friends went into Boston to enlist, but “They told us we couldn’t fight,” Bennett tells the audience, which follows him around like a tour group. Lenox’s father (also portrayed by Bennett) doesn’t think that African-Americans should be fighting in the Civil War, but Charles joins up.

During the Civil War Lenox saw action, and lost some friends. He also received a promotion during time in the Army.

“See these stripes? They weren’t just handing out these to just any colored man,” he said.

With Massachusetts COVID-19 regulations shutting down performance spaces, New Rep looked for other ways to bring theater to people. New Rep’s Artistic Director Michael Bobbitt said holding outdoor performances allowed the company to bring the production to small groups of people (the plays are limited to 25 people including the actor and a stage hand).

The play makes four stops around Watertown Square. Starting on the Delta, the group then moves to the plaza in front of Watertown Savings Bank, which sits across from the location of the barbershop. Lenox describes his experience during the war on the lawn in front of the Watertown Library, and the hour long play ends with him having just attended the parade and unveiling of the Civil War Monument that still stands in Saltonstall Park.

Ofori said the he enjoyed the added challenge of staging a play in the great outdoors.

“In this particular case … the street becomes the theater space for us,” Ofori said. “For me the best thing about this has been trying to figure out ways to curate the experience in such a way that even though we are outdoors, the people who are coming to see the show feel like this is an experience for them. An added element is the Town, people going about their day, also experiences the play.”

The play is socially distanced, so to prevent Bennett from competing with the noise of traffic he wears a microphone that amplifies his voice on a large speaker that is pushed around on a small hand cart. Bennett wears a face mask made from clear plastic so people can see his lips move and his facial expressions.

The Charles W. Lenox Experience, written by Ken Green, was based on historic information. New Rep worked with the Historical Society of Watertown and the Watertown Free Public Library to get background on Lenox.

When New Rep decided to do a historic play, Bobbitt contacted Assistant Town Manager Steve Magoon, who suggested he contact the Historical Society of Watertown. They also got help and historic documents from the Watertown Library. During the play, Lenox finds reproductions of newspapers from the time that update the audience about what’s going on with the war.

Bobbitt said he wanted the play to address the fact that racial issues are not limited to the South allowing slavery, but also that the North had, and continues to have, its own issues around race.

“The piece is very interactive, which is important, like street theater,” Bobbitt said. “We also want (audience members) to understand a lot of people don’t believe there are race issues in the North, but it is pervasive, and Massachusetts has long history of injustice.”

While the day of the dedication of the Civil War Monument was a proud one for Lenox, it was also vexing for him because the focus was on war saving the Union, with no mention of ending slavery.

The play came together quickly, Bobbitt said. Ofori and Bennet had only about two weeks after getting the script to prepare for the first weekend of performances at the end of September.

The first readings took place over Zoom, but Bobbitt was able to arrange for them to use space at Hibernian Hall for rehearsals, Ofori said.

“Ken (Green) has been able to be there for good part of it. It helped a lot,” Ofori said. “Kadahj is a fantastic actor. Being able to see him get up on feet and take ownership of the text was very powerful.”

The Charles W. Lenox Experience is the first of what Bobbitt plans to be a series of historic plays put on by New rep.

“We hope to do 5 or 10,” Bobbitt said. “In the spring we will do something on Watertown’s indigenous residents.”

The Charles W. Lenox experience of the Watertown Historical Moving Plays will run from September 26 – November 8, 2020, with outings scheduled for Fridays, Saturdays, and Sundays. Each outing will last no longer than 60 minutes. Tickets are $20.

As these tours take place in public facilities and on sidewalks, these tours are fully accessible to visitors who use wheelchairs or mobility devices. Our staff will review the tour route for any obstructions or inaccessible pathways in advance of the tour. Please be advised that this tour involves up to 60 minutes of walking and standing with minimal opportunities to sit down.

New Repertory Theatre is working with Ellice Patterson as an Accessibility Consultant on this production. More information on accessibility can be viewed as available at https://www.newrep.org/moving-plays/.