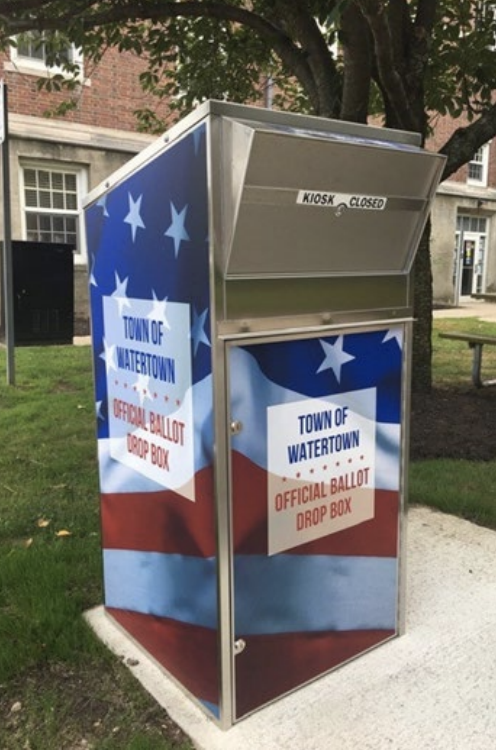 The ballot drop off box outside Watertown's Town Hall.

Many Watertown voters have already cast their ballot in the 2020 Presidential Election, with the number of votes already received by the Town Clerk’s office nearly as high as the total cast in the September Preliminary Election.

As of Tuesday afternoon, more than 40 percent of Watertown’s registered voters had turned in their ballots, according to Town Manager Michael Driscoll, who got the latest numbers from Town Clerk John Flynn.

The Town sent out 13,255 vote-by-mail and absentee ballots, many of which have already been returned, Driscoll said, plus early voting started on Oct. 17 and continues through Oct. 30.

“What’s been returned by mail is 7,474, The number of in-person ballots cast (during early voting) is 3,203,” Driscoll said. “That represents 10,677 ballots total, which represents 42 percent of the total number of registered voters eligible to vote in the election next Tuesday.”

Mail in ballots can be dropped off in the box outside Town Hall, 149 Main St., on the Saltonstall Park side of the building.

Town Council President Mark Sideris thanked Flynn and his staff in the Clerk’s office for overseeing the election.

“We have had very successful early voting period. We have had no issues, no ballot boxes have caught on fire,” Sideris said, referring to the ballot box set ablaze in Boston over the weekend. “The ballot box holds about 700 ballots, and it has to be emptied a couple times a day.”

Along with the race for President, Watertown voters can also vote in the races for U.S. Senator, Congress and on two statewide ballot questions. Voters in Precincts 1 through 9 also have two ballot questions for the 29th Middlesex State Representative District.

People voting on Election Day can do so from 7 a.m. to 8 p.m. at their precincts. Some polling locations have changed for the 2020 Presidential Election due to construction at two of the town’s schools. Precinct 2 moved from Hosmer School to the Hellenic Cultural Center and Precincts 11 and 12 moved from Cunniff School to Watertown Middle School cafeteria.