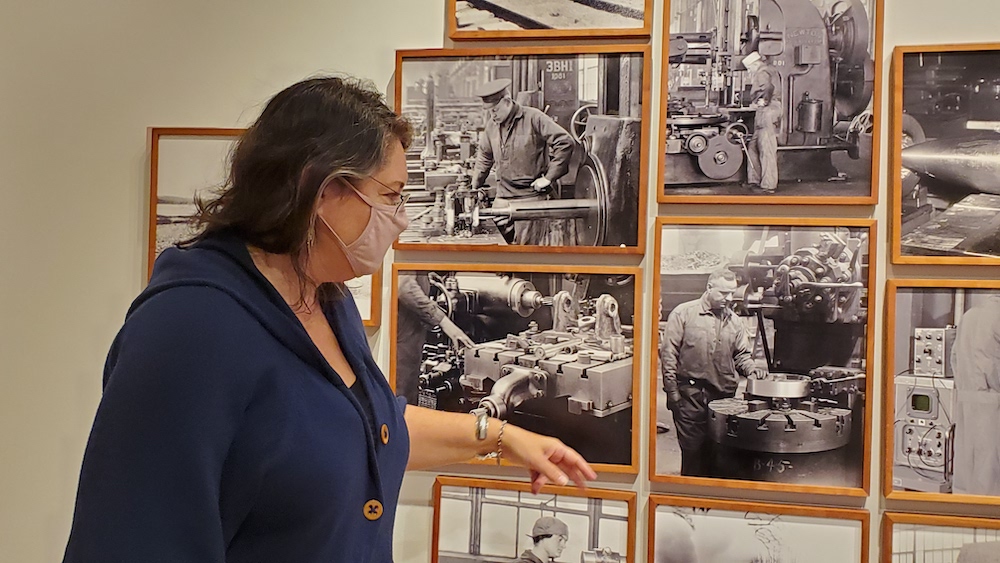 Watertown artist Chantal Zakari talks about some of the photos from the Watertown Arsenal in her exhibition at Kingston Gallery in Boston.

What used to be the U.S. Army’s Watertown Arsenal teems with activity these days, as two major construction projects — transforming the place that used to make and develop military weapons into commercial and lab/office complexes. A Watertown artist has used the labors at the Arsenal, historic and current, as the inspiration for her new exhibit on display now in Boston.

Chantal Zakari has assembled images of the Watertown Arsenal, ranging from the 1800s to the present, for her who called “A Work in Progress” at the Kingston Gallery in Boston’s SoWa neighborhood. The exhibition also includes a fictional newspaper with photos and stories created by Zakari, as well as a video installation featuring two screens on loops. The show runs through Dec. 6.

Zakari said she was drawn to the Arsenal because of the contrasts she she found between the historic and modern facility. The workers at the Arsenal particularly caught her interest.

“People who worked in the Arsenal were mostly immigrants and it was a way to move up into the middle class. It was a good job. In the middle of World War II 10,000 people worked at the Arsenal,” Zakari said. “Flash forward to today, there are strong companies there, but (workers) are not necessarily paid as well. A (retail) sales job is not getting you into the middle class, anymore.”

The area has also been an example of how the American economy has changed since post-World War II: going from a place that made bombs and weapons, to a closed toxic site and now being recreated as a shopping mall with big parking garages.

She was also inspired by the architecture of the Arsenal, which dates back to the early 1800s, and a building from 1853 still stands there. Zakari found herself spending time in the Arsenal on the Charles while her daughter Leyla Mandel took part in classes at the Mosesian Center for the Arts and took part in productions at the Watertown Children’s Theatre.

“I got the idea while sitting in Panera for hours waiting for her, looking at the beautiful building,” Zakari said, noting that some of the Arsenal buildings were designed by Alexander Pariss, who also designed Quincy Market.

Zakari and her husband Mike Mandel moved just blocks away from the Watertown Arsenal in 1999. Having a rich source for material nearby was helpful for Zakari, who has two daughters and works as an instructor at the School of the Museum of Fine Arts at Tufts University (located in the Fenway across from the MFA).

“As an artist you can go research in far flung areas, but as a mother — and I have a full-time job — I could just hop on my bike and go to the Arsenal to get ideas,” Zakari said.

Most of the 18 artworks in the exhibition are actually collages of framed photos and images assembled by Zakari. One, called “Building,” for instance, has historic photos of the large brick buildings from still standing at what is now Arsenal Yards, along with photos taken by Zakari at a business at the mall “where you can buy construction materials.”

In “Labor,” Zakari chose photos of Arsenal employees working with large machinery, along with her own images capturing the current construction at Arsenal Yards.

She found the historic photos at the National Archives in Waltham. Along with photos of weapons and workers, Zakari also found portraits of commanders at the Arsenal, which resonated with her childhood memories growing up in Izmir, Turkey.

“I grew up in an apartment building right across from the NATO headquarters, and some of the portraits I found in the National Archives in Waltham remind me of the American officers I would often see on the street,” Zakari said.

The video installation, called “About the Past,” is a family affair, with Zakari getting help from her daughter Leyla.

“She did all the editing,” Zakari said. “She learned it all at school at Watertown High School. And she took a class at the Watertown Arsenal.”

They also got help from two of Leyla’s friends from WHS, Lana Taffel who ran the boom mic, and Zoë Doyle who was on the Zoom recorder.

Two different videos play on loops, one 12 minutes long and the other 13. Two dancers, Em Papineau and Sofia Engelman, are featured in one of the videos performing original dances at various spots around Arsenal Yards and the Arsenal on the Charles.

The second video includes footage of workers constructing the new mall, along with footage a woman in uniform singing World War II era songs. Zakari first heard of Ruth Harcovitz when she was listening to a story on WBUR radio about a soprano who sang at nursing homes in the Boston area. Harcovitz even had a WAC uniform, Zakari said, and agreed to be part of the video.

Even those who cannot make it to the gallery in the South End might find a piece of the exhibit in Watertown. Zakari created an edition of the “Arsenal News” as part of the show. Copies are available at the Kingston Gallery, but Zakari said she will place them in places around Watertown (such as diners and perhaps the Watertown Library) for people to enjoy.

The Arsenal News was the bi-weekly publication produced by the workers at the Arsenal for 23 years. Zakari researched by looking at old copies at the Watertown Free Public Library.

“I made up the headlines but they are not fake stories,” Zakari said. “They really happened.”

One thought on “Artist’s Exhibit Captures the Transformation of the Watertown Arsenal With Historic, Modern Images”