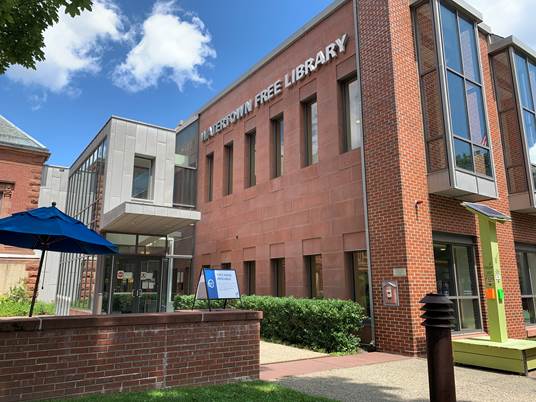 Two Watertown Library Trustees told the Charter Review Committee the board should remain an elected one, saying that having to run for the position keeps them more in touch with the desires of the community.

The discussion took place during Tuesday’s Charter Review Committee meeting. Members also of the School Committee gave their input to the group that is examining the equivalent of the Town’s constitution and will likely propose changes.

The Committee also discussed the draft timeline of the Charter Review process, and the new website.

The Charter gives the Library Trustees the authority to hire the Library Director and evaluate the director’s work. The board is one of three boards elected by voters, along with the Town Council and School Committee. It has six members who serve four year terms, and three are up for re-election every two years.

While there have been contested races in two of the last three elections, in the last one only just enough candidates ran for the three seats. After the election, one of those elected dropped out when she moved to another community. When a call went out for applicants to fill the vacancy it drew 16 people.

Leanne Hammonds, chair of the Library Trustees, said she and her fellow members have a strong opinion on the elected vs. appointed debate.

Some of the Charter Committee members asked whether the fact that so many more people expressed interest to be appointed to fill the vacancy shows that the board might benefit from being an appointed one.

Hammonds said an appointed board would have a different relationship with Town Council and Town Administration.

“If you are being appointed by a Town Council or Town Manager, instead of elected by people, it becomes a circular relationship because you are appointed by the same people you are advocating to, on behalf of the Library,” Hammonds said.

Library Trustee Teddy Kokoros said he thought the process of running for the Trustees — collecting signatures and speaking with voters — gave him valuable information about what people like about the Library and what they would like to see bolstered or added.

“If I didn’t have to go through the process I wouldn’t have gotten that information,” Kokoros said. “If you are appointed to something, even if you are soliciting information, it is a lot different from going door-to-door trying to gather signatures.”

He added that he believes that the Library is one of the most important institutions in Town, and should have more direct control by the voters

“I think it is important to keep the institution’s transparency and keep the public involved,” Kokoros said.

School Committee Chair John Portz spoke about his board’s section in the Charter. That section includes having six members, elected every four years and how vacancies are filled. The School Committee also hires and evaluates the Superintendent of Schools. Portz said he does not see anything that he would recommend be altered.

The Charter Committee asked School Committee members about their thoughts whether their term lengths worked well.

“The School Committee is able to do some specific things with the the Superintendent,” Stokes said.

Town Council President Mark Sideris, who also sits on the School Committee, agreed and said it is important for the superintendent to do his or her job.

“If you pick a superintendent, if you think the person works well in your district, then I think you need to have committee continuity for the superintendent to place his or her vision of what’s best for the schools,” Sideris said.

Charter Commission members asked whether a seven member School Committee (including the Council President) is the right size, and if there are opportunities to have some sort of district Committee members, similar to the Town Council.

Portz said that he believes the seven member committee has worked well, and nine could work too, but beyond that could be problematic. Stokes said having School Committee members who are not at-large (representing the entire Town) could work, but he did not have suggestions for how to split them up.

Town Councilor John Gannon said that in Somerville, where he used to serve as City Attorney, they have a School Committee member from each ward. The Somerville School Committee website shows seven members representing wards, along with the Mayor and City Council President.

One thing that Portz said may need to be looked at, though he said it may be more of a state issue rather than a Charter issue, is how the School Committee will conduct meetings in after the pandemic ends.

“We are doing Zoom meetings now, but at some point when we are done with that, done with the COVID period, I think there is going to be some thinking about how do we do out meetings,” Portz said. “We could have meetings that are combination of in-person and Zoom.”

The Charter Review Commission will meet at least twice in December, on the Dec. 1 and 15, and may meet on the 29th. Some members said they worried that people would be busy the week between Christmas and New Year’s and would not tune into the meeting.

The draft timeline works back from having a Townwide vote on the charter changes in November 2021, said Michael Ward from the Collins Center. A municipal 101 session will be held in either December or January to educate residents about the types of municipal governments in Massachusetts. This shows up as Xs with a question mark next to it.

The draft timeline includes four months for collecting input from the community, ending in February. Also, the Charter Review Committee would discuss major decisions from January to March, and minor decisions would be discussed from February to April.

Residents and Charter Committee members expressed concern that ending the input period in February would be too early. Ward said that he does not envision a “hard stop” to collecting input in February, adding that it would continue through the process.

Others on the Committee and from the public had a problem with the Town Council having the final discussion and vote on the Charter changes over the summer of 2021, a time when people often take vacations.

Sideris said the whole Charter Review process will be flexible.

“Everything here is going to be flexible. Ten years ago we talked about things and went back to them,” Sideris said. “It is important to allow for flexibility. If things come up in one session and we want to go back we can look at something we’ve already discussed.”