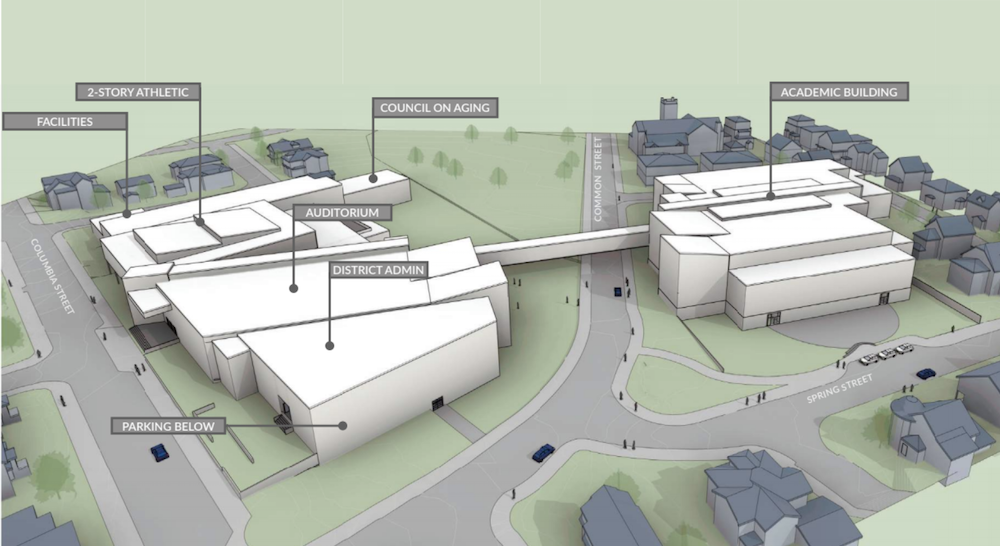 A conceptual design of the preferred option for the New Watertown High School, looking down Common Street toward Mt. Auburn Street.

Architects working on the new Watertown High School tweaked the designs to make them less obtrusive to neighbors, and showed potential pickup and drop off areas around the two buildings on either side of Common Street.

Ai3 Architects presented the conceptual designs at the fifth Community Forum for the high school project held virtually on Monday night. On Dec. 2, the School Building Committee will discuss the plan and is expected to approve a preferred schematic option.

Jim Jordan, an architect with Ai3, said the current design phase is when designers look at how the buildings will fit on the two properties planned to be used for the new school. A core academic building is proposed for the land where the Phillips School and Senior Center now sit. On the current high school site architects plan to have a building that would hold the gym, auditorium, Senior Center, District Administrative offices and the school’s dining/kitchen area.

“We are not necessarily looking at windows and door placement, that comes during schematic design and we have along way to go before we can share with you information about that,” Jordan said.

See the documents presented at the meeting by clicking here.

He did share some of the ideas for the main entrances into the new campus, including one off Spring Street into the academic building, one into the gym/auditorium building off of Columbia Street and a potential third one off a driveway between Marshall Street and Common Street. Jordan noted that architects were not directed to put in the driveway off Marshall Street, but wanted to explore it as an option.

A “peel off” area is being considered on Spring Street for quick drop offs and pick ups at the new academic building, Jordan said. School Building Committee member Heidi Perkins (the director of Finance and Operations) suggested having a U-shaped driveway, similar to the one at Watertown Middle School, to get vehicles off the road.

The main drop off area would be along Columbia Street, and students would walk across a pedestrian bridge over Common Street to get to the academic building. Residents brought up concerns about vehicles leaving the area using the residential streets off of Columbia Street, and wondered if there would be parking for students in the new school.

Scott Dunlap, project architect for the WHS project, said most of the parking will be under the gym/auditorium building and there will be at least 200 spaces, including surface parking.

“I don’t think we have a specific student parking plan,” Dunlap said. “We talked about 200 spaces on the site. That is to make sure we don’t lose parking rather than to increase parking on the two sites.”

Size of the Buildings

The size of the main academic building has been the focus of much of the concern with the project, especially from neighbors on Marshall and Spring streets. When the design was presented on Oct. 8, it showed a four-story building, but it was reduced in height and pushed farther from the roadway.

“It is three stories along Common Street, and we are trying to scale the building back along Marshall Street by stepping the building back. And the site lines pushed back away from Spring Street,” Jordan said.

While the building is being called two stories, the slope of the property as it goes toward Spring Street means that there is almost enough space for another story along Spring Street by using the foundation under the building, Jordan said. The sight lines for someone on the sidewalk on the other side of Spring Street would be similar to looking at the current gym next to the Senior Center.

More efforts are being made to reduce the impact on neighbors, Jordan said.

“We are looking at options to step the building back further, so it would be one story (on the edge) and the three story space would set back (closer to Common Street),” Jordan said. “We are not losing square footage, we maintain those setbacks and are trying to accomplish in a way to make sure there is a pleasant view for all the abutters.”

Architects also are beginning to look at ways to make the facade along Columbia Street more presentable than in the original designs, Jordan said.

Plans showed space for the District Administrative offices, which at a prior meeting had been proposed to be moved to the old Police Station, near the Watertown Library. Town Council President Mark Sideris said the Town Administration will make the decision about what to do with the Police Station, and discussions are just beginning. For now, the WHS designs will include the District offices.

With the new academic building going on the area where the Senior Center sits, a new facility will need to be built. The plan is to move it across Common Street to be near the gym/auditorium building.

The new one would have 15,000 sq. ft. of space on two stories. It would have access to some of the facilities at the high school, including the gym, a small field, and a cafe that could be run by students as part of the career and technical education (CTE) program at WHS.

Recreation Director Peter Centola pointed out that between the two properties there are currently two gyms — one at the high school and one next to the Senior Center — but with the new one there would only be one.

Jordan said there will be an elevated walking track above the gym, which seniors could use when the school is using the gym. There will also be other physical education facilities — such as a weight room, cardio area and an aerobics room — that could be shared between the school and the Senior Center.

Planning for the new Senior Center are in the preliminary stages, Jordan said, and a meeting between architects and the staff of the Senior Center/Council on Aging will be held on Dec. 3.

People commented that they wanted to make sure there is a plan for easy access for the senior shuttle and buses for Senior Center trips on the site.

During the proposed construction schedule, the Senior Center and the District Administration offices would move to the St. Jude’s School site in Waltham (currently being used for Cunniff School) for a few years. See more info on the timeline below.

More than half of the WHS project is expected to be paid for by Massachusetts School Building Authority. To get the funds, the project must be approved by the MSBA board, and to keep on schedule a preferred option must be chosen soon, said Christy Murphy, from owners project management firm Compass Project Management. The School Building Committee is expected to vote on the preferred option on Wednesday.

“We really need the rest of the month of December to prepare (the schematic design) report for the MSBA,” Murphy said. “That is a firm date of Dec. 29 in order to go through the Facilities Assessment Subcommittee meeting in January and be ready for the MSBA Board meeting on Feb. 11.”

If the MSBA board signs off, schematic design will begin.

“That’s when we go much deeper into the design,” Murphy said.

The School Building Committee will continue to meet monthly on the WHS project and more Community Forums will be held.

“Then we will be looking in August for the Town Council to set the special election date,” Murphy said. “We will be finalizing the final scope and budget in September. The schematic design report, the key report to the MSBA, will be submitted on Sept. 8. That is a firm date if we want to make the MSBA meeting on Oct. 27 — and that sets us up for a special election in November 2021.”

If the project is approved, the detailed designs would be drawn up, and the project would begin in the summer of 2023. The proposal calls for building it in three phases, over four to five years.

Phase 1 would being with moving the Senior Center and the District offices to St. Jude’s in the summer of 2023 so that the Phillips School and Senior Center can be demolished. The new academic building would be constructed on that site. Phase 1 is expected to take 18-24 months.

Phase 2 includes the demolition of part of the existing high school, including the 1930s and 1950s portion along Columbia Street. The gym will remain so it can be used during construction of the new gym, Senior Center and District offices. That phase will take about 12-18 months.

“You can see that the new area has been designed to fit around the existing athletic space so we can keep those occupied and functional until the entire new gym is complete,” Dunlap said.

In Phase 2, the current gym would be demolished and the new auditorium would be constructed along with the pedestrian bridge across Common Street. The final parts of the project include completing site work and creating the green space between the gym/auditorium and Common Street. The third phase is expected to take 12 months.

The School Building Committee will meet on Wednesday, Dec. 2 at 6 p.m. in a virtual meeting. The public can join in and participate using the following links:

The presentation for the meeting will be posted prior to the meeting on the Watertown Building for the Future site:
https://www.watertown.k12.ma.us/building_for_the_future/meeting_info

The meeting will be televised by Watertown Cable on the Education Channel (Comcast Channel 8 and RCN Channel 15 and online at https://cloud.castus.tv/vod/#/watertown/video/5f490d3802eb340007b0e2e7?page=HOME&type=live).