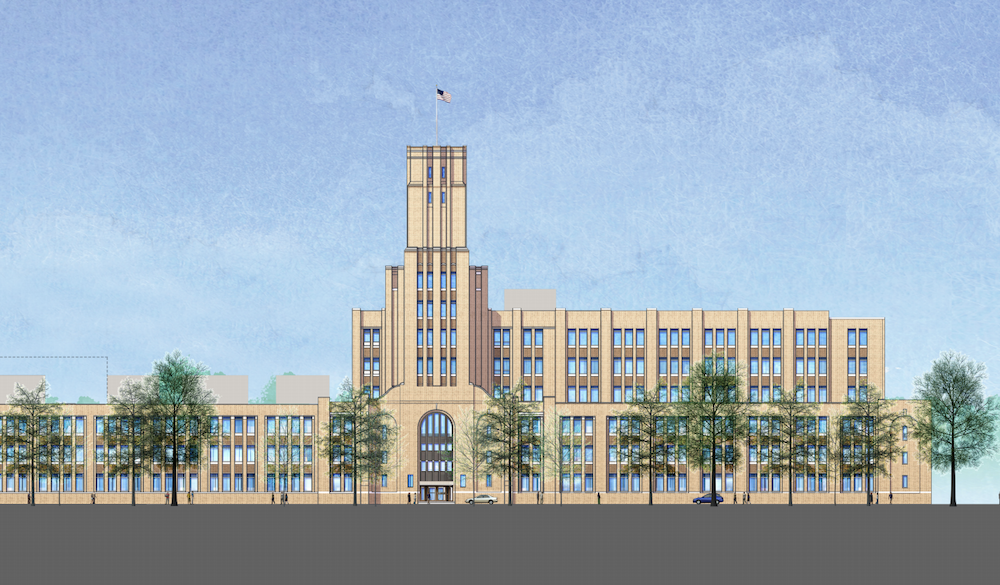 Plans to turn the former Tufts Health Plan building into biotech lab and office space was approved by the Zoning Board of Appeals.

The Zoning Board of Appeals approved the project that will renovate and add on to the former Tufts Health Care building on Mt. Auburn Street on Wednesday night.

The new owners, Spear Street Capital, wants to turn the area into life science office and lab space. Plans include renovating the interior of the main building, adding a small building on the back and renovating on the property near Grove Street.

“This is a unique opportunity to take a dated and somewhat obsolete site and transform it into what we intend to be a vibrant and dynamic ecosystem, with intention of simply attracting a variety of sophisticated life  science and technology oriented users,” said Michael Rack, a vice president at Spear Street Capital.

When completed, the property will have 480,000 sq. ft. of floor space, which is an increase of nearly 27,000 sq. ft. The added space will be added in a four-story building in back of the main building, that will replace a small building used as a loading dock. The new building will have the loading area, two floors of office space and a floor to house the central plant for the entire 705 Mt. Auburn St. building. This includes the mechanical systems such as heating and air conditioning.

The project will be designed to a LEED Silver standard, and will include 40,000 sq. ft. of photovoltaic solar panels on the top of the parking garage.

The amount of asphalt on the property will be reduced and replaced with public space with landscaping. The number of parking spaces will be cut by 160, and the main vehicle entrance on Grove Street will be realigned to allow a traffic light to be installed at that spot.

“Parking was clearly the highest priority during the former phase the project development,” said landscaping engineer Rich Hollworth of VHB. “We have been very careful to selectively eliminate parking that we believe  would enhance the setting and the relation with the surrounding public uses.”

A large area, intended to be used by both employees and the general public, will be created the area between the main building and the parking garage. The patio area will go on an area that is now surface parking and part of the driveway, Hollworth said. Also, parking spaces along the front of building on Mt. Auburn Street will be removed, and replaced with green areas. The U-shaped drive will remain.

An area of about a quarter of an acre will be turned into a small park area with plantings along the section of the Watertown Greenway (also called the Community Path) that runs through the property.

The work on the 64 Grove St. building will be mostly interior said architect Michael Manfredi, of Weiss/Manfredi. The three-story, 60,000 sq. ft. building is now used as office space, but will will be converted into lab space.

East End Councilor Angeline Kounelis said she worries about the property having sufficient parking. That has been a problem during the time that Tufts Health Plan occupied the building.

“Employees were actually traversing streets and parking in our neighborhoods,” Kounelis said. “It has been a problem for decades.”

Because the intended use is a mix of office and life science labs, the number of employee cars is expected to be lower. The number of spaces required for the project at 705 Mt. Auburn St. is 1,256, and they will have 1,286. In addition, there will be 87 spots for the 64 Grove St. building, and 250 spaces that are leased to Mount Auburn Hospital.

Watertown Senior Planner Gideon Schreiber said the demand for parking at other life science buildings in town has been “substantially less” than for office buildings.

Michael Wilkins, a resident of School Lane, which lies just east of the building, said he is concerned about the potential for noise from the new building that will house the central plant. He noted that the homes on the street are two-families, and many have bedrooms in the back on the second and third floors.

The equipment will be inside the four-story building, said Manfredi. Designers decided to put it there rather than on the roof of the existing three story building along Mt. Auburn Street. He added that an acoustic expert looked at the equipment and where it will be located, and said it will meet the Town’s noise requirements.

SantucciRozzi said she believes the designers have taken steps to try to minimize the impact of the new mechanical systems.

“The fact that they are putting on an addition to house all these different things, instead of creating a complete disaster on top of the roof, really goes a long way, in my opinion, to show that they care not only about their own property but also about abutters,” SantucciRozzi said.

ZBA member David Ferris called the existing building one of Watertown’s gems. He suggested that the historic tower could be emphasized at night by adding some lighting. Manfredi said his firm worked on the renovation of the former Sears building in the Fenway, which has a similar look to 705 Mt. Auburn St. Some subtle lighting was added to enhance the look of that building, Manfredi said.

The ZBA unanimously approved the projects at both 705 Mt. Auburn St. and 64 Grove St. The ZBA included conditions for approval to not allow trucks to idle, and have a continuity of color of the equipment on the roof with the rest of the current building.

The hearing for the project at 23-29 Elm Street to construct a three-story life science lab building was not heard by the ZBA on Wednesday. It will be the first item taken up at the March meeting.