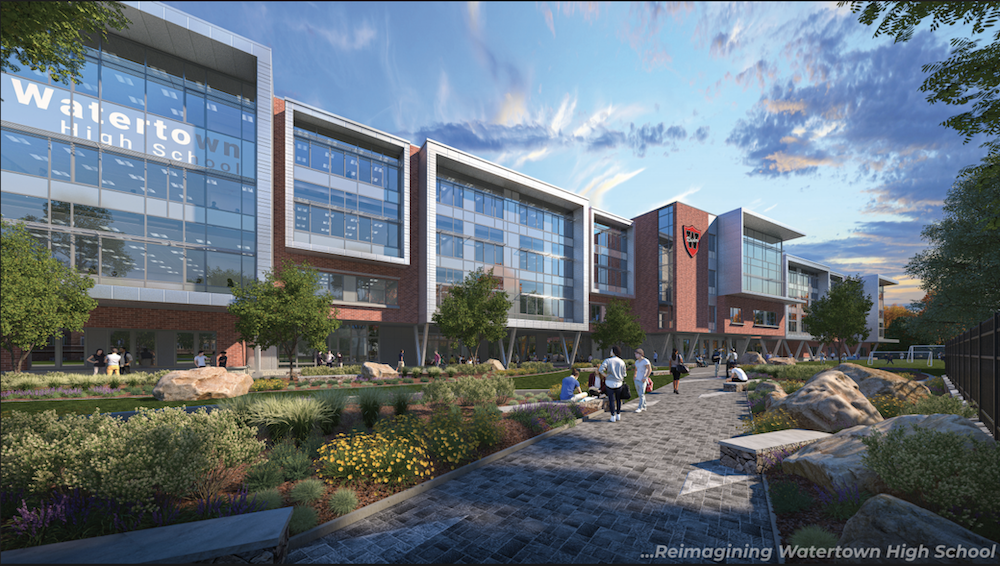 A rendering of what the new Watertown High School could look like. The view is from Common Street.

Architects unveiled a new concept for the new Watertown High School that would keep the school in one building located on its current site. It would also be cheaper and would have a shorter construction period. The new plans would include building a temporary campus, likely next to Watertown Middle School.

Designers of the new Watertown High School went back to the drawing board to come up with designs taking into account requests made by state officials.

Besides wanting to see the square footage cut, officials from the Massachusetts School Building Authority (MSBA) wanted the entire academic program in one building and did not like the idea of having a pedestrian bridge over Common Street to connect two sides of the high school, as had been proposed.

Jim Jordan, from Ai3 Architects, showed the School Building a variety of options, but said School administrators and architects liked the one dubbed 1H, which would have a building that was mostly three stories, but would go up to four stories on the half of the building closest to Common Street.

Unlike the previous proposal, called 3D-4, the new plan would not include space for the district administration, the Senior Center nor the town’s Facilities Department.

The new proposal would save money and time, Jordan said.

The layout of the new school will be more efficient than the current one. Superintendent Dede Galdston said the current school has a number additions that make the non-academic space larger than they would be if they were included when the school was first built.

“What we are looking at is more programming in less space,” Galdston said.

School Building Committee member Paul Anastasi said he had been discouraged after the last meeting, when it felt like Watertown had been “brushed back by the MSBA” with all its concerns about the first proposal. He was pleased by what he saw this week.

“This is quite a bounce back,” Anastasi said. “We regrouped. We have a great design, here.”

The School Building Committee asked designers to create a net zero energy school by placing solar panels on the roof to generate the electricity used by the school. Jordan said the smaller building would mean less roof area, and currently would not have enough space for the panels required. He said designers would have to find a way to make the new design net zero.

The faster construction schedule will be possible if temporary swing space can be found to move the school during construction. Designers looked at putting in modular classrooms on the Phillips Building site, across Common from the current school. They also considered putting it on Moxley Field, next to the middle school, which is their preferred option.

Jordan said the newest modular classrooms can be stacked two stories tall, and can have fully equipped state-of-the-art science labs. He showed the School Building Committee photos from inside science labs in modulars that are being used by Wellesley College. He said those same ones could be used by Watertown.

The plan calls for putting the school on the grassy area of Moxley, while preserving the tennis courts, play structure and trees on the site. The high school would also use the small gym and locker rooms at the middle school, as well as rooms in the basement on that side of the school.

The kitchen at the middle school could also provide food for the high school, Jordan said, and students would have an outdoor area to gather and eat on the Moxley Field site. School Committee Chair John Portz asked if designers could create some sort of temporary cafeteria on the Moxley site.

Jordan said the two story modular buildings are a new technology and Watertown would be one of the first places to have them. School Building Committee member Kelly Kurlbaum said she wants to make sure the two-story design works.

“Sometimes it’s not good to be the guinea pig,” Kurlbaum said.

A parking lot with nearly 100 spaces could be built on the site, too. Jordan said, so faculty members do not have to park on neighborhood streets. Students could safely cross Bemis Street, Jordan said, because the street between Moxley and the school is closed to traffic during school hours.

The option of having modulars on the Phillips site was not as inviting, Jordan said, because it would require the renovation of both the Phillips Building and the Senior Center to be used as classrooms. Also, the temporary rooms would not fit well on the site. Jordan added that students would not have access to a cafeteria, and would have to cross Common Street to use the gym. In addition, they would be close to the construction site.

WHS Principal Joel Giacobozzi said he liked the option of having a modular campus at Moxley.

A parent wondered if the temporary school would have the air circulation that might be needed if COVID-19 is still a concern. Jordan said each modular would have its own climate control, and Galdston added that the air purifiers purchased by the district could be moved there.

Town Council President, Mark Siders said a meeting will be held to answer questions and concerns of residents living near Moxley Field to discuss the plan.

When the high school project is finished, Moxley Field would be refurbished. Sideris noted that the Town has a $900,000 item in the longterm capital budget to refurbish the field, and having the swing space would just delay that project a few years.

In the first plan, a new Senior Center and offices for district administration would have to be built. If 1H is used, the current Senior Center could be preserved.

Sideris said he spoke with Town Manager Michael Driscoll about making improvements to the facility, and he agreed to fund a master plan study of the Senior Center and Phillips Building. That project would be independent of the WHS project.

Designers will come back to the School Building Committee with more details about the WHS project at its next meeting on March 17, said Christy Murphy, from the owner’s project manager firm, Compass. School Building Committee member Leo Patterson asked that a brief study of the first proposal be presented, so the district has it as a back up if the MSBA does not like the new design.

A Community Forum is also planned, and will likely be on March 24, Murphy said.

To get the project on the agenda for the MSBA’s June meeting, Murphy said, it has to be submitted by May 5. That would require an approval from the School Building Committee in April to proceed with the 1H design.