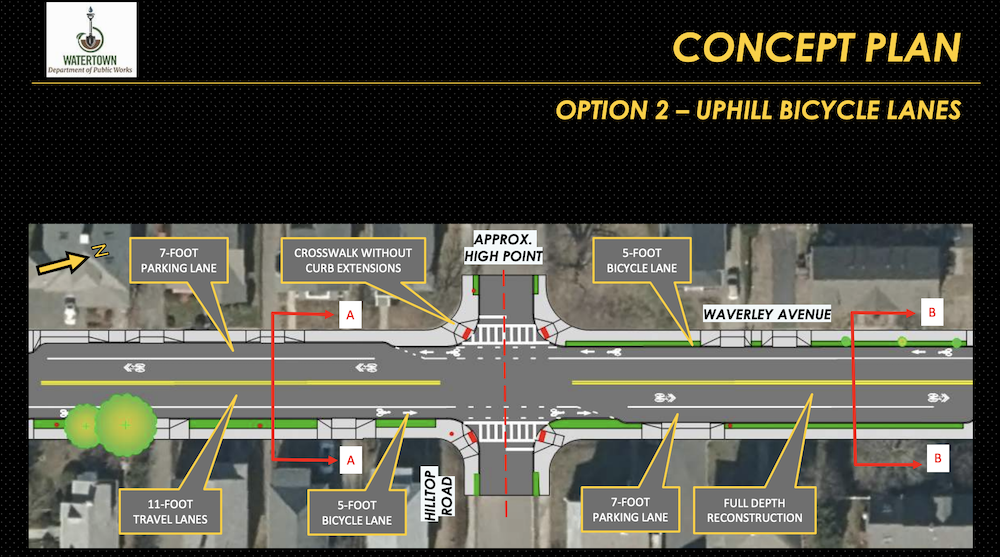 An illustration of the new bike lanes on the uphill part of Waverley Avenue between Orchard and Belmont streets.

Bike lanes will be added on the uphill parts of the section of Waverley Avenue near Orchard Street, in a plan that will also add curbing and planting strips along the roadway.

Both options studied by the Department of Public Works would have met the Town’s Complete Streets goal, which calls for Watertown’s roadways to be designed for a variety of transportation options, including motorists, cyclists, pedestrians and public transportation. The other option would not have allowed for planting strips on the west side of the street.

The bike lanes be on both sides of the street, but will not run the entire length of that part of Waverley Avenue. They will only be on the uphill portion of the street, which peaks between Orchard and Belmont. When the street begins going downhill, bike lakes will merge into a shared lane with traffic. Requests were made to run the bike lane a little past the peak of the hill to make the transition to a shared bike lane less abrupt for cyclists.

“Waverley is an essential north-south connection in the western part of Watertown,” Compagna said. “It connects the Trapelo corridor, for people coming from the north, with the Community Path and the (Charles) River Path in the south. Bike lanes also provide safe access to the Lowell School, the Middle School, Victory Field and on through to the High School.”

Resident John Ovian said he did not know why the bike lanes needed to be added.

“I cannot understand the logic of deciding to have a bike lane on a small section of Waverley between Orchard and Belmont Street when the section from Main to Orchard does not have one. And as the street goes into Belmont, they don’t have one either.”

The Council’s Committee on Public Works held a meeting on Feb. 25, which many area residents attended. Some said they worried about the loss of street parking. The owner of local business, an optometrist whose office is on Waverley Avenue near Orchard, said she has particular concern that the new curbing would eliminate parking in front of her business.

Council Vice President Vincent Piccirilli said that the Town’s Zoning Enforcement Officer, Mike Mena, met with the optometrist to come up with a design that worked for her. While parking in what would be the front yard is not allowed in the zoning, the building and its parking spaces were built before the zoning was created.

“I assured her the Town Administration and the Department of Community Development will work with her to make a plan to make sure that her customers can still park in her front parking lot,” Piccirilli said.

Councilor Angeline Kounelis said she had concerns with the plan because of the loss of 22 on-street parking spots. She noted that neighbors spoke about the parking and noted that the parking study was done in March 2019, when the winter parking ban was still in effect.

Town Engineer Matt Shuman noted that the study was done during the daytime, and the parking ban only goes into effect for overnight parking. He added that the DPW also monitored the area informally after the parking study was conducted.

Councilor Anthony Donato, who is on the Public Works Committee, said that the biggest discussion about on-street parking during the Public Works Committee meeting was about a space near the optometrist’s office. While the traffic engineers looked to see if it could be preserved, Donato said that was not possible because it was so close to the intersection of Waverley and Orchard.

The Council approved the option with the uphill bike lanes by a vote of 9-0.

4 thoughts on “Plan to Add Bike Lane to Section of Waverley Ave. Approved by Council”