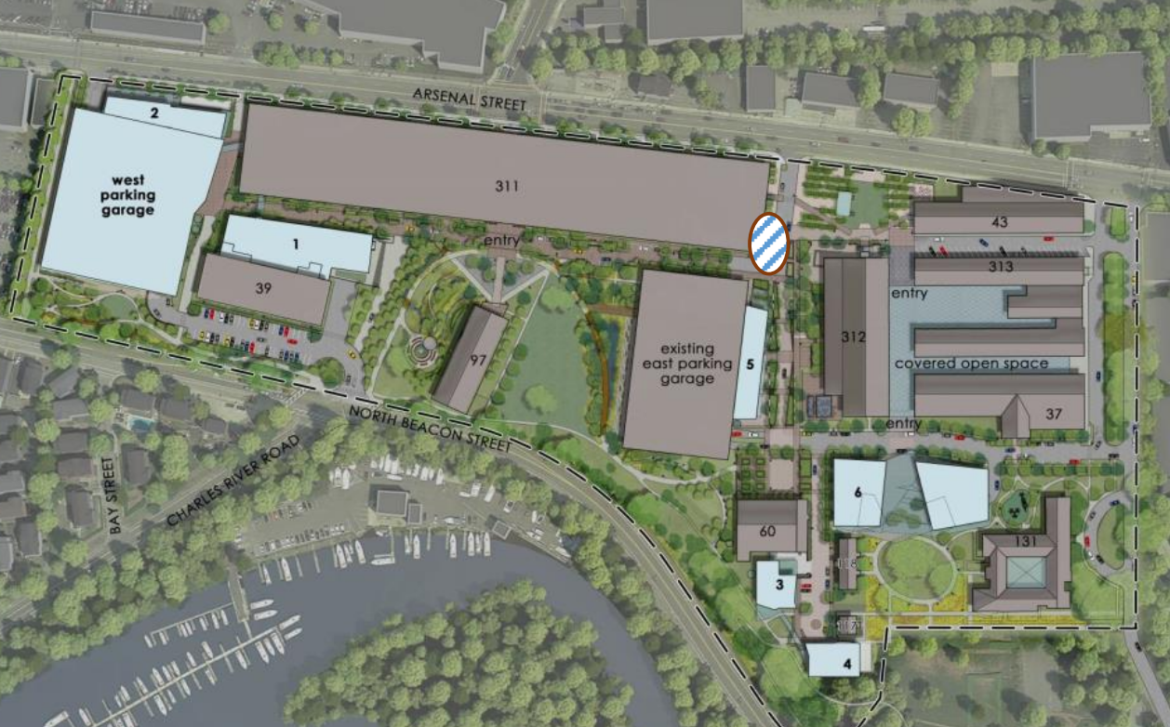 The oval with blue stripes is the location of the contaminated soil at the east end of Building 311 in the Arsenal on the Charles.

The U.S. Army has come up with a plan to remove contaminated soil from the former military site, which is now the Arsenal on the Charles. The public can submit comment on the proposed plan until April 14, 2021.

The area where the contaminated soil is located is by 311 building on the Arsenal on the Charles site. Building 311, the long building along Arsenal Street, is home to Athenahealth, and used to be home to Boston Sports Club. The contamination is near the entry driveway that runs between Building 311 and the building where the Mosesian Center for the Arts and Panera Bread are located.

A report with a proposed action plan has been created and released by the Army. See the report by clicking here.

“In coordination with Army, EPA and MassDEP, it was determined that these soils should be removed …” the report reads.

The study estimates there is about 2,000 tons of soil that would need to be removed. The area where the contamination is mostly covered by a sidewalk next to Building 311 and and parts of Kingsbury Avenue between Arsenal Street and Wooley Avenue. There is also a small amount of landscaped area within the sidewalk and next to Building 311.

During a construction project in August 2015 to work on utility infrastructure east of Building 311, subsurface soils containing “elevated levels of contaminants, notably PCE and TCE, were discovered.” The owners at the time, Athenahealth, notified the EPA and the Army. A study found the soil was limited to a shallow area of the soils, generally less than 5-feet in depth, at the east end of Building 311.

Studies conducted by the Army in 2018 and 2019 found that “while elevated levels of TCE and PCE exist in sub-slab vapor beneath the southeast portion of Building 311, indoor air concentrations of these compounds do not currently pose an unacceptable risk to human health.”

The study concluded, however, that the levels could become hazardous for people inside Building 311 in the future, and contaminants could also leach into the groundwater and move to different areas. That could lead human contact to vapors or direct contact.

This is not the first time that contaminated soil would be removed from the site. In the 1990s, about 10,500 tons of material was dug up and disposed of off-site. Also, in 2006, contaminated soil was removed during the construction of the new parking garage on the west end of the Arsenal on the Charles site.

The Town of Watertown sent out the following announcement, with information for how to comment on the proposal:

The Department of the Army, in coordination with state and federal environmental regulatory agencies, is announcing the public availability of the Engineering Evaluation /Cost Analysis (EECA) for the Non-Time-Critical Removal Action at the former Army Material Technology Laboratory (AMTL) located at 311 Arsenal Street in Watertown, Massachusetts (Building 311). The EECA recommends excavation and removal of soil containing chlorinated volatile organic compounds. The soil that is subject to the removal action is currently localized beneath private sidewalk and roadway at the east end of Building 311.

PUBLIC COMMENT PERIOD: The EECA is available for public review, and the Army will accept comments during the 30-day public comment period held from March 15, 2021 through April 14, 2021. Public comments submitted in writing must be postmarked or e-mailed no later than April 14, 2021. The EECA can be reviewed at the Public Comment Reviews as the AMTL FINAL DRAFT EECA at: https://dcsg9.army.mil/brac/.