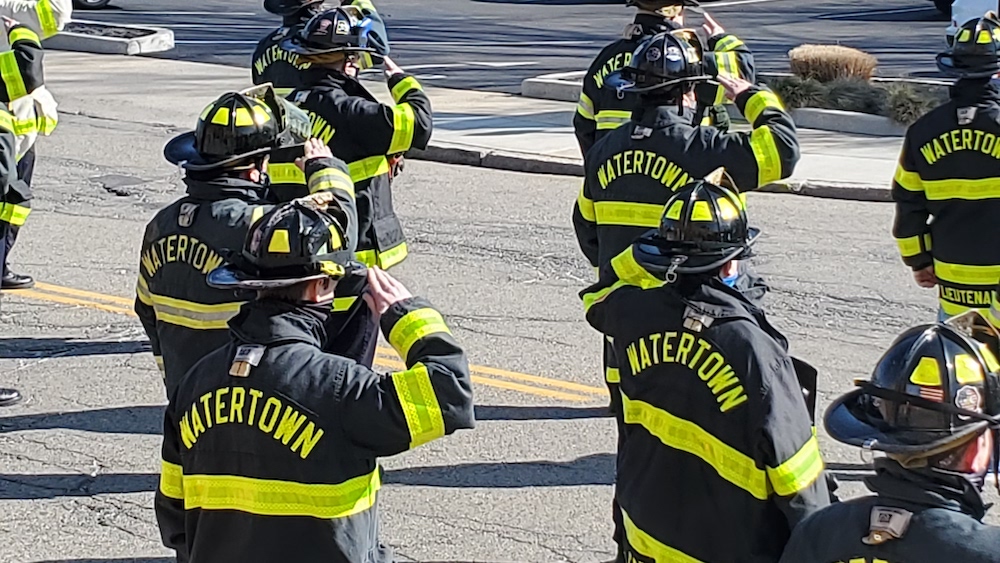 Members of the Watertown Fire Department salute their fallen colleague, Joe Toscano, on the fourth anniversary of his death at a fire on Merrifield Avenue.

The Watertown Fire Department came out in force to honor a colleague lost while fighting a fire in the East End four years ago.

Firefighters and the family of Joe Toscano gathered on Bigelow Avenue, at the square dedicated to his memory. The sign bearing his name sits just down Merrifield Avenue from the home where the fire took place. Fire Chief Bob Quinn hung a wreath from the pole holding the sign marking Firefighter Joseph A. Toscano Square during the cermony.

Quinn said the Fire Department pays its respects to the five members who have lost their lives in the of duty. On Wednesday, firefighters stood four rows deep to salute Toscano.

“This one here attracts more people because most of the guys worked with Joe and knew Joe personally” Quinn said. “There are a lot of young guys that never worked with Joe but they still come.”

The group stood in silence beginning at 10:16 a.m., which was the time that the call for the fire came in to the Fire Department, said Assistant Chief Ryan Nicholson said. Members of the Police Department, the Town Council and Town administration also attended the ceremony.

“It’s hard to believe it’s been four years … Standing there in silence brings you back to memories of Joe,” Nicholson said.

Quinn has many memories of Toscano, who served as his driver and aide for 13 years when Quinn was a deputy fire chief.

“Joe was a very knowledgable guy, very talented. He knew a lot about building construction,” Quinn said. “He was a master carpenter on the side. Just knew a lot about a lot of things, plus he was a fabulous cook. I knew if I had him with me I’d have a good meal all the time.”

Quinn said Tosano was also a devoted family man, and his family and some of his close friends also attended Wednesday’s ceremony.

“If this was a good year they would have ben invited last night to have dinner with the group and sit down, which they have done in the past,” Quinn said. “It’s good for both sides. The group likes to bring the family around, and the family likes to be with the guys.”