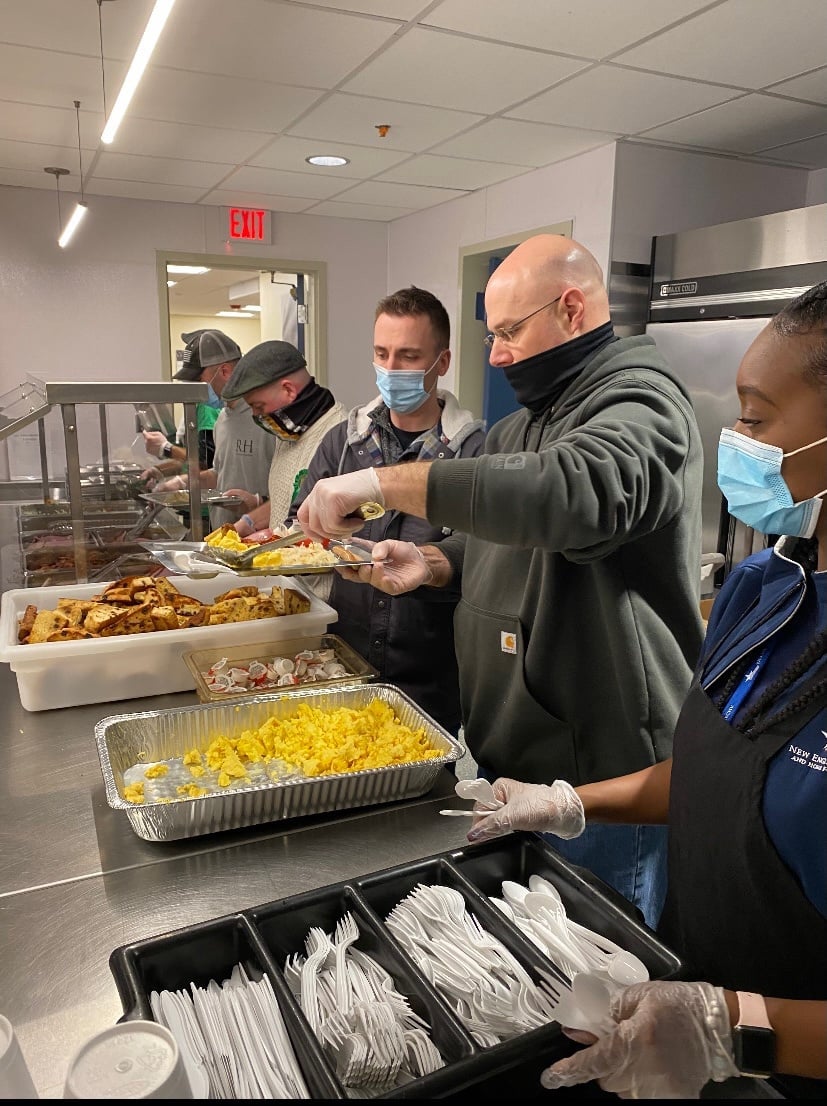 Watertown Police officers Keith Parent (front), Kyle Rooney, Frank Forde and Mike Martino work with a member of the New England Center and Home for Veterans to serve breakfast on St. Patrick's Day. The effort was spearheaded by Forde.

More than a dozen Watertown police officers and firefighters gathered early on the morning of St. Patrick’s Day at the Sons of Italy Hall to prepare a traditional Irish breakfast for 200 people at the New England Center and Home for Veterans.

The effort was coordinated by Watertown Police Officer Frank Forde, who wanted to do something on the day that is important in his homeland.

“I’m originally from Ireland, so St. Patty’s Day is my holiday,” said Forde, who grew up in Galway. “I have assisted before with Chef Mike (Fucci) at Christmas and Thanksgiving. This was on my radar. The veterans and especially homeless veterans are having a hard time these days.”

The center in Boston serves veterans who are homeless, or at risk of becoming homeless. It provides meals, as well as job opportunities and other assistance, Forde said.

“I always have had huge respect for veterans. I’m an Irish immigrant, I moved to Watertown 7 years ago, and got on the (Police) force nearly two years,” Forde said. “Any time an opportunity like this comes up — even before I was on the force I was always trying to give back and help out. This is one of the things I wanted to help out with.”

Forde has a bit of a food background, having worked for years at Meat Spot in Watertown Square. For the breakfast, he left the supervising to Chef Mike. The cooking process started well before dawn, Forde said. Then some of the group delivered and served the food at the center.

“We got about 12 of our guys (from the Police Department) out and some guys from the Fire Department up at about 3:30 a.m.” Forde said. “We got all the food out to them, and we got to serve the food, too. Originally they said we couldn’t do it, but they knew we were all vaccinated, so they said you can serve the food. Honestly, that was the best thing.”

“The guys were so grateful, saying thank you so much,” Forde said.

They made enough food for 200 people., and there was enough food left to for the next day, too. The reception was so positive that the Veterans Center asked Forde if it could become an annual event.

“I was talking to the cops and the firefighters and they said they don’t know why it can’t be an annual thing,” Forde said.

To pay for the breakfast, Forde ran a GoFundMe fundraiser.

Most of those who gave money were Watertown residents, Forde said, but one of the donors was Boston Bruins player Brad Marchand, who gave $200.

Forde was able to get coffee donated by Riverside Management, which owns several Dunkin’ Donuts including those in Watertown.

Forde used the money on food, and purchased 300 pairs of socks and 400 pairs of underwear. He got a discount from BJ’s in Waltham.

“I asked the center, what’s the most needed items you guys want,” Forde said. “They said honestly, we need underwear and socks. It’ sad, because we all take that for granted, but it’s what those guys need the most.”

Forde said he spent about $1,000 each for the food and clothing, and he donated $8,000 to the New England Center and Home for Veterans.