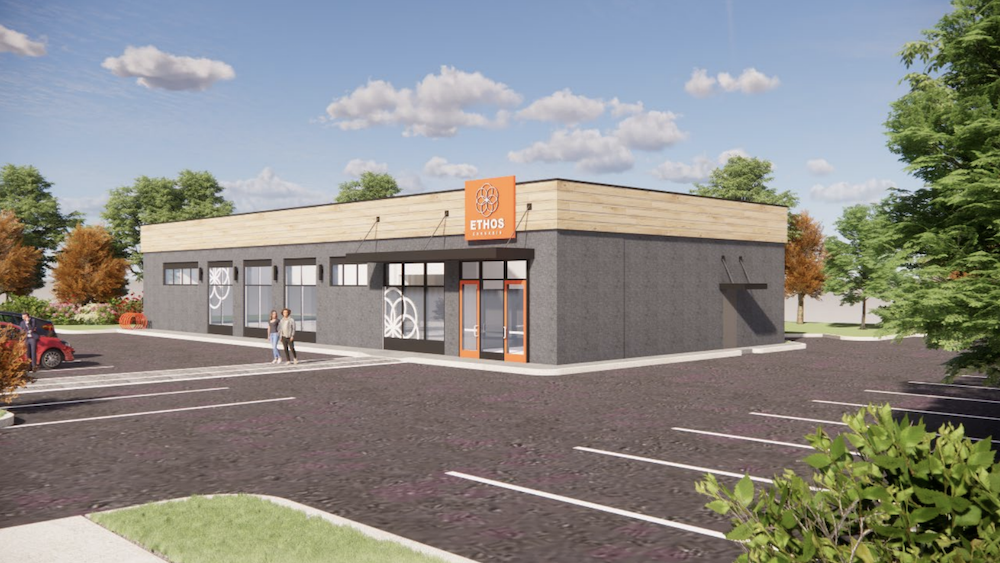 An illustration of the renovation of the former Monro Muffler into the new home of Ethos Cannabis.

The Zoning Board of Appeals approved the new location for Watertown’s first marijuana dispensary, and also that meeting a decision on a proposed project on Elm Street was not settled because of questions about whether it has enough parking for the biotech labs it would house.

Natural Selections, which operates Ethos Cannabis, needs to find a new home because the current site — 23 Elm St. — has been sold and would be replaced by the biotech building that also came in front of the Zoning Board on March 26.

The dispensary plans to renovate the former Monro Muffler site at 390 Arsenal St., which sits across from the Arsenal on the Charles. The footprint of the building will not be changed, but there will be some changes to the materials used on the exterior, said Chief Operating Officer Alex Hardy.

The parking lot would be reconfigured and landscaping would be added to the site, Hardy said. The site will have 23 parking spaces. The current site has 21 spaces and is never more than a third full, Hardy said, and typically about four spots are used be staff.

The dispensary opened for medical sales in July 2020, and in December 2020 began recreational sales. Ethos pays a percentage of its sales to the Town of Watertown as part of its host community agreement. During the most recent month they paid $29,840 to the Town, Hardy said, and the annual payment is anticipated to be between $375,000 and $400,000.

Hardy added that the dispensary has not received any complaints about security, loitering, traffic or parking.

ZBA Chair Melissa SantucciRozzi said she recalled when Natural Selections first came before the ZBA four years ago. She credited them for running the dispensary on Elm Street well.

“This is something a lot of communities look negatively upon, but when done right there really is no problem and you guys have shown that,” SantucciRozzi said.

SantucciRozzi added, however that she did not like the design of the parking lot with a separate entrance and exit. She preferred that they have only one curb cut that is for both entering and exiting the site. A condition was added to the approval that required that only one curb cut be allowed, and that designers would work with the Town Engineer to determine the best location.

Ferris also wanted to make sure there were no roof-top mechanical units that would be visible or if they are, have them screened. Architect Matthew McGeorge said there will be three small units on the roof, but they would not be visible above the roofline.

ZBA member Christopher Heep said it is unfortunate the dispensary has to move after just a few years, but he is glad to see the new site will improve a property that has been in need of redevelopment.

A large portion of the meeting was spent on the proposal to build a life science lab building at 23-29 Elm Street.

Developers of the property at 23 Elm Street propose to construct a three-story building with 78,000 sq. ft. of floor space and 98 parking spaces. Developers hope to build space for life science startup companies to move into when they are ready to grow. The building would provide fully-furnished, fully-equipped lab space for the companies, said Dr. Johannes Fruehauf, one of the partners in the development and a Watertown resident. He is the founder and president of BioLabs, which has created about 400,000 sq. ft. of these types of buildings around the country.

The ZBA’s concerns about the project focused on the parking area, which would be under the building. SantucciRozzi said she worries that the building may not have enough parking, and the parking that is there is too tight. She noted that half the parking is tandem parking, where vehicles park behind one another, and also that the spaces are smaller than in most lots.

Developers said they will have a parking management firm to oversee the garage and would have valets available to get cars in and out of the tandem spaces.

Fruehaus said the typical life science workforce is young, recent college graduates and many do not have cars. They often use public transportation, ride their bikes or use ride shares (such as Uber or Lyft). Steve Winnick, the attorney for the developers, said that the project has a transportation demand management plan to reduce the number solo drivers commuting to the site, and that the plan would be reviewed after a year to see if changes need to be made.

Heep said he generally supports the project but he does not want to find out later that the garage is not big enough.

“I don’t agree with the idea we can permit this project and see what happens. We need the information now,” Heep said.

The developers asked for a continuation of the case so they can provide more information about parking and other issues. See documents for the 23-29 Elm St. project here.