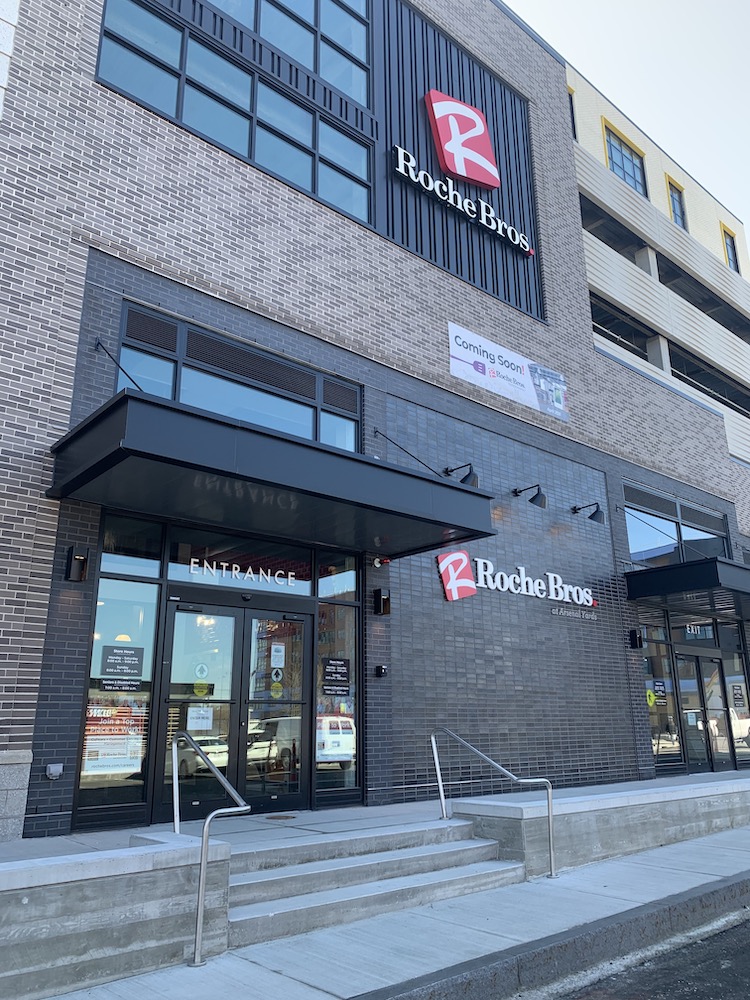 Watertown’s newest grocery option has opened at Arsenal Yards, and packs a wide variety of produce, prepared food and made-to-order items into a smaller space than a typical supermarket.

“It is almost like an outdoor market,” Ackles said. “Each (department) has its own shopping experience.”

In that space, shoppers will have plenty of ready-made items to choose from: hot food to heat-and-eat meals, packaged salads and fruit, baked goods and deli meats and sliced cheese. Fresh-made sandwiches are available from the deli, and the flat-bread pizza maker offers made to order pizzas and slices, Ackles said. Sushi made daily by Yummy Sushi will be available. The store also carries a large selection of products from Stonewall Kitchen.

The cafe, called R.B. Roasters, features coffee from Atomic Coffee Roasters of Salem. It is located in the corner of the store and overlooks the open area known as the Rivergreen as well as Arsenal Park. The cheese shop features the many products of New England cheesemakers, as well as fresh pasta made by Tuscan Market in New Hampshire.

Roche Bros. tries to work with local producers, Ackles said, and the Arsenal Yards store will carry Italian imports from Watertown-based Pure Italian, as well as bread from Iggy’s Bread of Cambridge.

During warmer times, the store will roll up a pair of garage-style doors to offer an outdoor shopping experience.

“In the spring and summer we will offer an outdoor floral and produce market,” Ackles said. “In the cooler months, we will have pumpkins.”

The store also has a catering department, and people can make custom orders from the bakery and floral shops.

The addition of a grocery store is a key part of the vision for Arsenal Yards, said Andrew Copelotti, a principal at Boylston Properties — the developer of the project.

“To us this is going to be a game changer, it is a hugely important tenant,” Copelotti said.

Roche Bros. will be a perfect fit in the development, which has retail stores and restaurants, as well as apartments, life science companies and a hotel, said Tom Wilder, principal of The Wilder Cos.

“From the very beginning we set out to create a neighborhood feel,” Wilder said. “A grocery story has always been a perfect fit for Arsenal Yards.”

Arsenal Yards has leased most of the retail spaces.

While the COVID-19 pandemic has not been good for business, Wilder said that it has shown that developers’ plans for a more diverse mix of businesses, especially those which don’t just rely on brick-and-mortar stores.

One thought on “Roche Bros. Packs Many Offerings in a Smaller Grocery Space at Arsenal Yards”