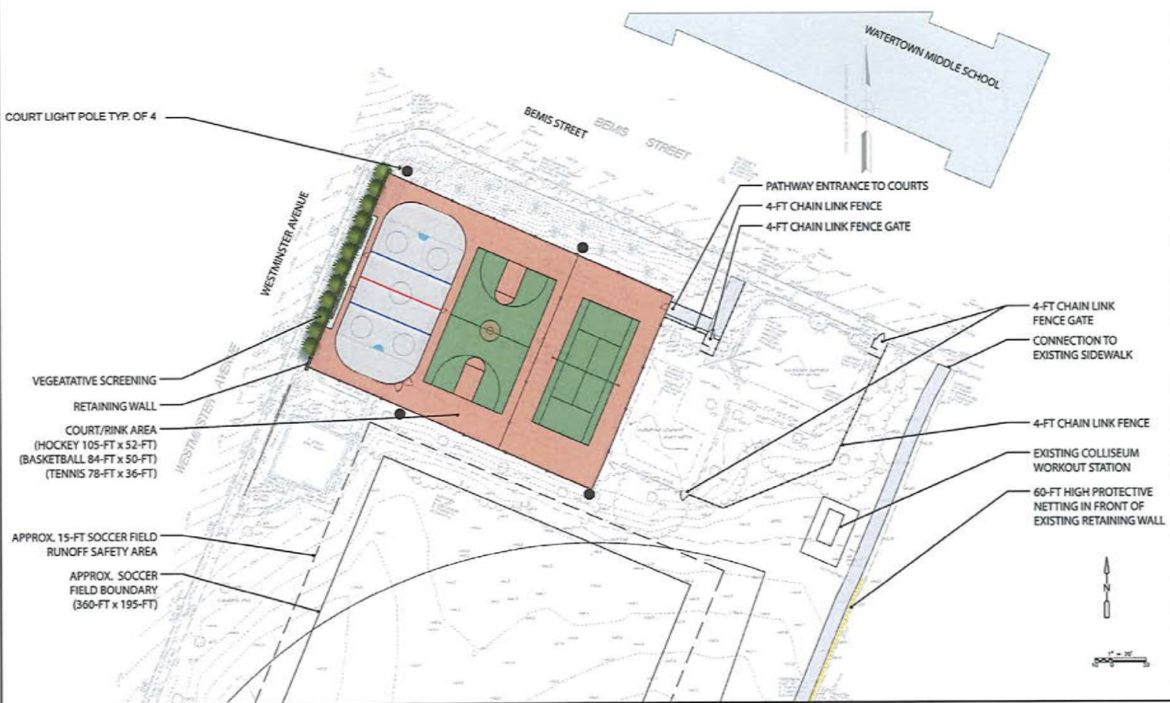 A drawing of the proposed layout for the courts and a street hockey rink at Moxley Field.

The City Council discussed plans to renovate the courts at Moxley Field, but one feature — a street hockey rink — caused concerns among the Councilors.

The City’s goal is to complete the work by the fall of 2022, before the rest of Moxley Field goes under construction to be the temporary home of Watertown High School while the new school is built.

Planning for the courts began a few years ago, said Glenn Howard of CDM Smith, who made a presentation to the Council in November 2017. The idea of replacing one of the tennis courts with a street hockey court —‚ which could also be used for soccer, lacrosse or other sports — came up then.

A public walk through of the site occurred in December 2017, and Council President Mark Sideris recalled that some neighbors opposed the idea of having a hockey rink there.

At Tuesday’s Council meeting, Howard presented a timeline that would allow the project to be designed, bid and constructed by November 2022. That is the time when site work would begin for the modular classroom campus on the grassy area of Moxley Field. The timeline called for bidding designs by the end of January, doing engineering designs from February to April, bid the construction in May, and get Council approval for the project by the end of June. Work would take place between July and November, Howard said.

Sideris, who also chairs the School Building Committee, said that neighbors were assured by the Schools that they would have access to the courts and playground at Moxley Field while the majority of the grassy area was being used for the temporary high school. He is concerned, however, that it has been more than two years since the courts project has been discussed.

“I am torn here because of my role and what we want to do for the high school, and also as a representative for the neighborhood,” Sideris said. “I want to make sure they are aware of what we are doing.”

He asked that the designers meet with the neighbors before the final designs are made. Howard said CDM Smith would be able to schedule a meeting without impacting the schedule.

The rink will be below street level, and a retaining wall with vegetation on top will be constructed along Westminster Avenue.

Councilor Lisa Feltner said she worries about putting a rink at Moxley, after what she has heard from residents living near the outdoor rink at Casey Field.

“In my six years on the Council the biggest complaint about noise has been from this kind of hockey rink (at Casey Park),” Feltner said.

She said the noise is different from that from a tennis or basketball court, and Feltner added she is not convinced that a retaining wall would take care of the noise.

Councilor John Gannon said he wanted to make sure that the courts would not be rented to groups from outside Watertown.

Council Vice President Vincent Piccirilli said that the stair-climbing structure at Moxley Field has also been a source of complaints.

“It really has never been used by the school and physical education teachers, and because it is an attractive nuisance — basically people hang out and drink beer there at night, and neighbors don’t like it,” Piccirilli said. “The space could be better used for recreational purposes.”

Sideris said the structure came as part of a physical education grant received by the Watertown Public Schools, so he will have to check with school officials to see if there are any requirements that would prevent the structure from being removed.

The courts project is part of the City’s Capital Improvement Plan (CIP), said City Manager Michael Driscoll. The entire five-year CIP will be presented at the Jan. 25 Council meeting, but Driscoll said he wanted to bring this project forward so it could get started before the Council makes its final capital project recommendations in late February or early March. Currently, the proposed CIP has $900,000 budgeted for the Moxley Court project, Driscoll said.