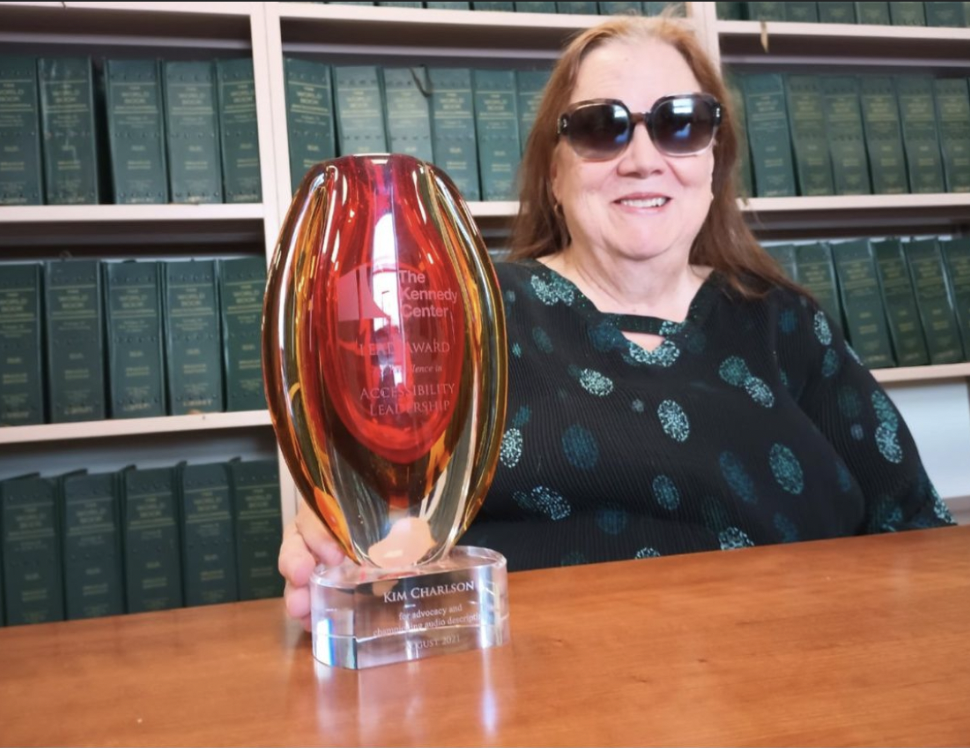 Watertown's Kim Charlson recently won an award from the Kennedy Center for Performing Arts for expanding access to the arts for people with a disability.

Watertown resident and director of Perkins School for the Blind’s library Kim Charlson received a national award for her work expanding access to the arts for people with disabilities.

Recently, the John F. Kennedy Center for the Performing Arts presented Charlson with a Leadership Exchange in Arts & Disability (LEAD) award. The award recognized her work to expand access to the arts for people who are visually impaired. Awards were presented at a ceremony in Raleigh, North Carolina, on Aug. 5.

“My recognition by the Kennedy Center is truly special. I have to say that people really have noticed and that is due to the respect and reputation of the Kennedy Center,” Charlson said. “To receive an award from an institution that was established to promote the arts and honor President John F. Kennedy is absolutely amazing!”

Charlson moved to Watertown in 1985 when she began working at Perkins. For 16 years she served as the assistant director of the Perkins Braille & Talking Book Library. In 2001 she became the library’s director. She has also served on the City of Watertown’s Commission on Disability since 2011, and became chair in 2013.

“Every day in my work at Perkins, and with the Watertown Commission on Disability, present me with continuing opportunities to advocate for expanded accessibility in all aspects of daily life,” Charlson said. “My recognition from the Kennedy Center for the Performing Arts was specific to arts access and expanded audio description.”

During her time on the Commission on Disability (WCOD), the group has helped more people to access City Council meetings.

“One of the most visible accomplishments of the WCOD was implementing closed captioning for the Watertown Town (now City) Council,” Charlson said. “This service benefits so many people in the community who are deaf or hard of hearing, and opens up access to town government. It was a terrific partnership with the Watertown Community Access TV.”

Another achievement Charlson is proud of is easing the process for people to cast their ballots during elections.

“Another example of access in Watertown that I am very proud of is more recent. It is access to the mail-in or absentee paper ballot for people who are blind or have other disabilities, such as paralysis, to be able to electronically read, mark, and return a ballot without any assistance,” Charlson said. “Watertown was one of the first five municipalities in the Commonwealth to make this access available, first due to the pandemic, and now as an accommodation to the mail-in paper ballot.”

While she is proud of her service on the Commission on Disability, Charlson would welcome others who would advocate for the blind and visually impaired.

“I take my role as a representative of the blindness community very seriously, but I certainly would like to mentor someone else into that position, if anyone is interested,” she said. “Until that time, I will continue to serve the Watertown community.”