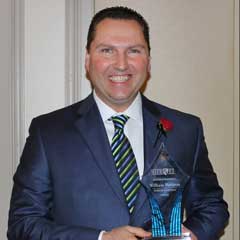 Watertown Savings Bank (WSB) Assistant Vice President and Branch Manager William Burgess has been named a Community Bank Hero by The Warren Group and Banker & Tradesman. Community Bank Heroes is an annual award that honors the achievements, commitment and dedication of financial professionals who go above and beyond for their institution and community. Eleven other Massachusetts community bankers also received the award.

“It is a pleasure to recognize and honor the hard work and dedication of this year’s recipients of the Community Bank Heroes Award,” said Timothy M. Warren Jr., CEO of the Warren Group. “Each individual’s approach to their profession represents a true passion for their work and an admirable commitment to the communities in which they serve.”

Burgess has worked for WSB for 23 years, starting out as a teller. He currently manages the bank’s East Watertown branch. For the last eight years, Burgess has served on the advisory board of the Money Management program at Springwell, Inc., an organization that helps seniors and individuals with disabilities live at home with dignity and independence. Burgess has also been the treasurer of the Warrendale Little League (WLL) for 12 years.

During his time as WLL treasurer, he developed, along with the help of his two children, the Emerging Leaders of Waltham program, which has helped many students learn how to start, run, and market a business. Top students from the program receive a scholarship from Dale Carnegie Training to study public speaking. Emerging Leaders of Waltham is currently in its sixth year, and Burgess is looking to expand the program to Watertown.

Burgess is a graduate of the New England School for Financial Studies, the New England College of Business and Finance, and the Dale Carnegie High Impact Presentation Skills program. He was born and raised in Waltham, where he still currently resides with his family.

“It was a pleasure to nominate Bill for this award for three reasons: he is a great branch manager; his work with Springwell; and his creation of the Emerging Leaders program,” said Carole Katz, VP of Marketing. “He does all of these things and more from his heart, with grace and humility.”

Awards were distributed at a dinner event held on Thursday May 19, 2016 at the Hyatt Regency in Boston, MA. Recipients are featured in the May 16 issue of Banker &amp; Tradesman. To see a full list of the Community Bank Heroes and for more information about the awards dinner, visit: www.thewarrengroupevents.com/communitybankheroes/

The Warren Group collects and compiles data on real estate sales and ownership throughout New England. They offer a range of real estate products, information services and printed and online publications, including the weekly newspaper Banker &amp; Tradesman and monthly magazine The Commercial Record. The company also produces and organizes trade shows and events for a variety of industries, including bankers, mortgage brokers, credit unions and lawyers. Based in Boston, the company was established in 1872 and is now in its fourth generation of family ownership and management.