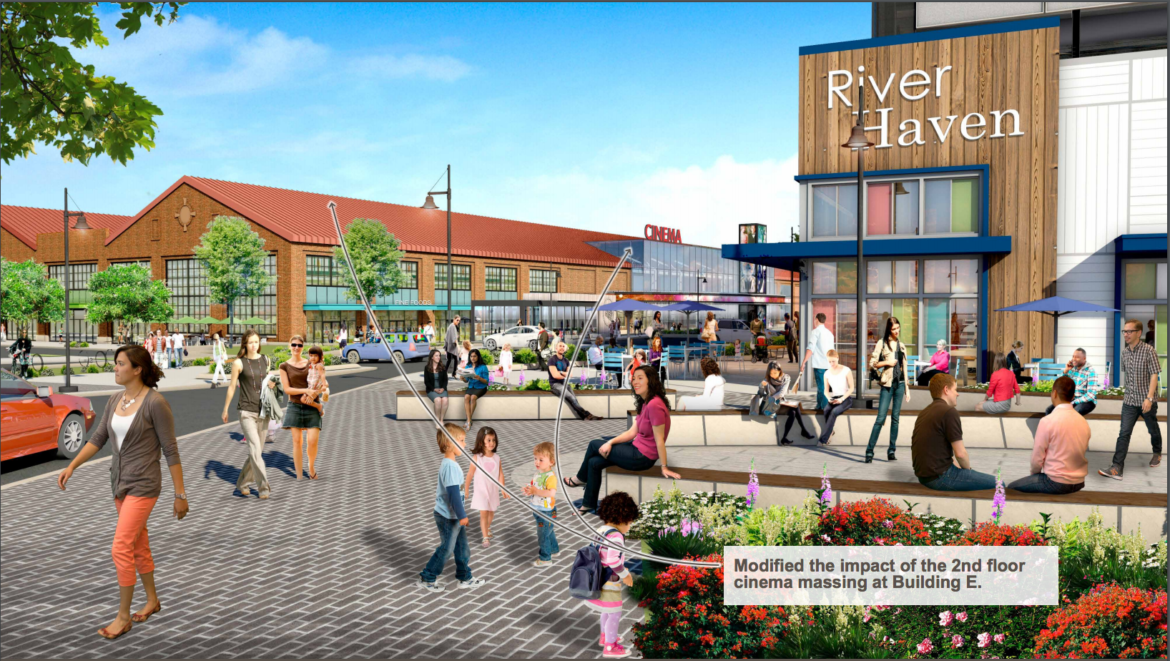 A view from the interior of the renovated mall with the movie theater shown on the bottom floor of the far building. Previously it was on the second floor of the building.

An image showing what the renovated Arsenal Mall would look like.

The developers behind the renovation of the Arsenal Mall have asked Town officials for something that has never been given in Watertown – a cap on the amount of property taxes.

Bill McQuillan, principal of Boylston Properties, sent Town Council President Mark Sideris a letter last week requesting a “tax certainty” deal with the town. On Tuesday night, the Town Council referred the request to two subcommittees – Budget and Fiscal Oversight and Economic Development and Planning. Representatives from Boyslton and The Wilder Cos. said they need the certainty to get the funding required to pay for the $400 million project.

As retailers struggle to compete with the surge of e-commerce, those stores that continue to make a profit the ones that operate well both online and at brick-and-mortar stores, said Tom Wilder of the Wilder Cos., which will manage the development.

“Retailers who have figured how to do that know that and use leverage,” Wilder said.

They can set deals where they don’t have to cover their share of property tax increases.

“If we are paying real estate taxes at X dollars per square feet, they say, we don’t care, here’s what we are paying,” McQuillan said.

Because of this, McQuillan said, Boylston and Wilder Cos. (which will operate the new development – Arsenal Yards) need to ensure that taxes won’t jump up to a point where the development is no longer profitable. This certainty is needed to get the funding from the groups that will finance the project, which will be between $300 and $400 million depending on whether Boylston builds the large residential tower or sells it to another company to develop and who finances the new proposed Hampton Inn Suites.

“When we built the Residence Inn we had a cadre of investors who own private funds,” McQuillan said. “We can’t do that at the mall.”

McQuillan expects investors will include equity players – such as pension funds and insurance companies – and commercial real estate construction lenders.

“They become critical in the decision process,” McQuillan said. “They are risk averse and real estate savvy.”

McQuillan said, assuming he gets approval on the first phase, a tax certainty deal would be needed by the summer so construction can begin in the fall, as scheduled.

Exactly what the the deal would look like is not clear. McQuillan said other communities have TIFs (tax incremental financing) deals to use future property taxes increases to pay for economic development projects, or use Chapter 121A deals under Massachusetts law to upgrade blighted areas.

Town Council Vice President Vincent Piccirilli said neither one of those provide a tax certainty, and he added it would be an unprecedented move by the town.

“The Town of Watertown has never offered tax breaks to any property owners,” Piccirilli said.

McQuillan argues that the project is the biggest in town and would be the most public one, being on the eastern gateway of town and looking to draw people to the complex.

Right now the owners pay about $1.7 million on the Arsenal Mall (including Golfsmith but not Home Depot) along with the Harvard Vanguard offices. McQuillan said he suggested setting the taxes at $4 million a year starting when the construction is complete in 2020.

“After that there would be an annual increase,” McQuillan said. “I suggested two percent.”

East End Town Councilor Angeline Kounelis has opposed the project from the start because it creates such a dense development with a 12 story tower and six story buildings on Arsenal Street. She said the project was sold to the town with the promise of large property tax increases.

“Now the developer is pleading hardship and asking the community to give him a tax break,” Kounelis said. “East End residents have had exorbitant tax increases, and are still looking for relief – they have been for years.”

Kounelis said she is dubious about the sudden need for a change in tax assessments.

“Any prudent developers do homework and look at the crystal ball,” Kounelis said. “They look at trends. These trends do not come overnight.”

Councilor Lisa Feltner said that she will wait until she knows more and gets input from Town Manager Michael Driscoll. However, she is still concerned about what the deal would mean for the town.

“What’s the certainty for the town?” Feltner said. “As an elected official I have to have to put the town’s interest number one.”