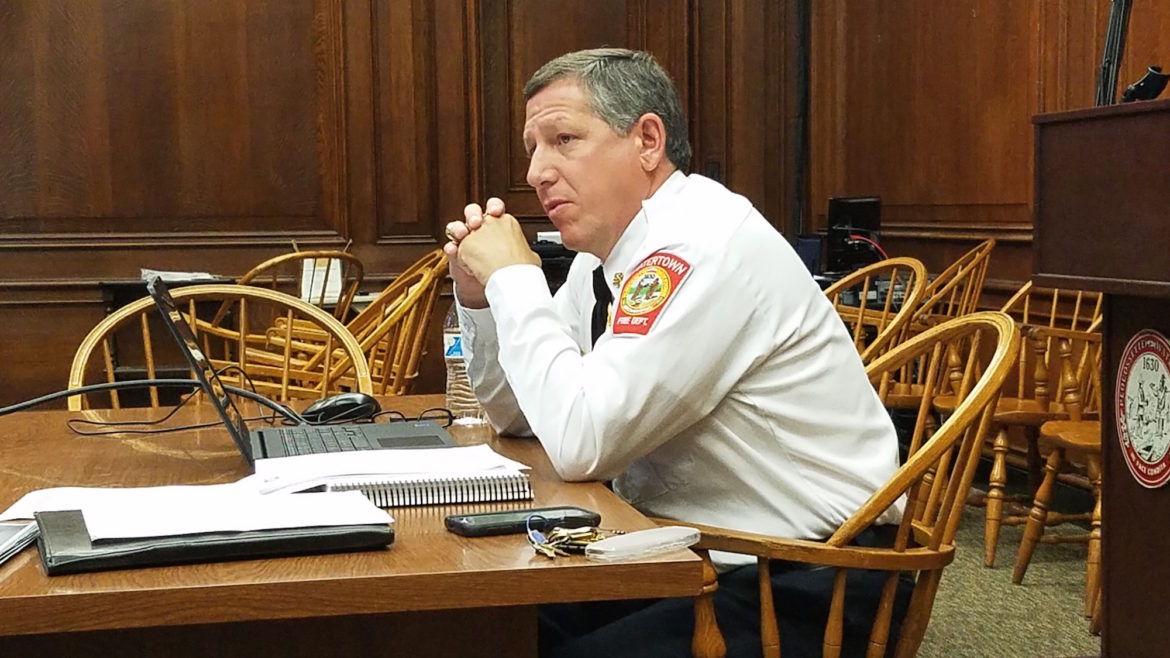 Orangio has served as Fire Chief for more than 13 years, but he has decided to step down.

“I have some health issues,” Orangio said. “It is time to pass the reins.”

The Fire Department has been selling T-shirts to raise money to help Orangio and his family as he battles cancer, Deputy Fire Chief Bob Quinn said at a previous meeting.

Town Manager Michael Driscoll said that he remembers appointing Orangio as a firefighter in 1989, and when be became a lieutenant in 1997, a captain in 2000 and then chief in 2004.

Driscoll said, “Strength of character is what makes a person a truly great person.” He added that Orangio has demonstrated that, and has shown dedication to the Fire Department, the town and his wife and daughters.

“Chief, thank you for a job well done,” Driscoll said.

Town Council President Mark Sideris thanked Orangio for all that he has done as chief.

“From the start to here, you’ve had some challenges,” Sideris said. “You have done the job in a way that made us proud.”

Orangio said he made a goal of having the Watertown Fire Department run its own ALS paramedic service when he became chief. The effort stalled during the economic downturn in the late 2000s, but this February Watertown’s first ALS ambulance went into service.

The retirement must be approved, so Orangio said he expects to be working another “couple months.” Watertown hires using the civil service system. It has not been announced how the new Fire Chief will be chosen, but when Michael Lawn was appointed the Police Chief in 2016 he was selected from candidates within the Watertown Police, and applicants were tested and then finalists went through an assessment center to see how they would react to real-world situations.