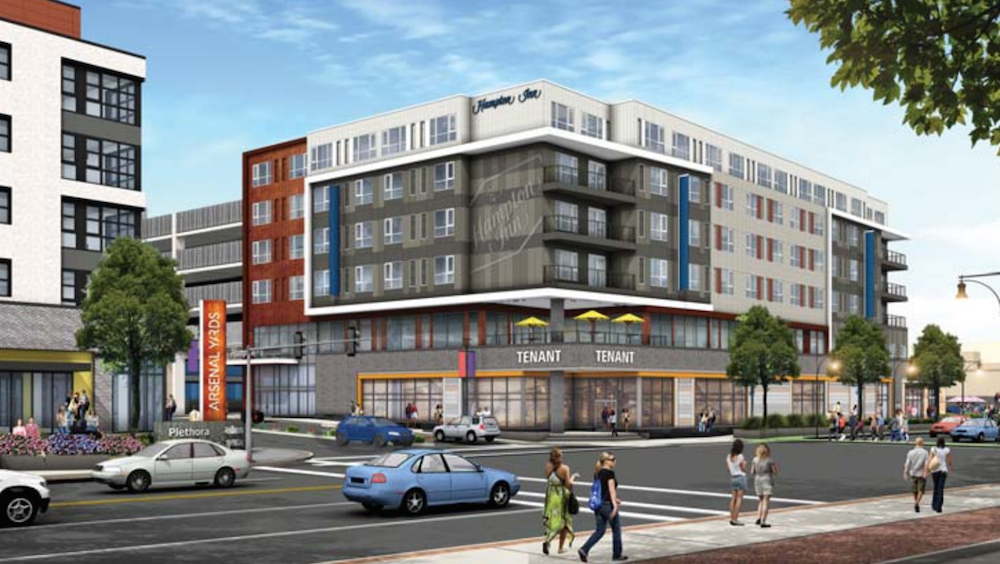 A rendering of the proposed Hampton Inn & Suites to be built in Phase 2 of the Arsenal Yards project.

A rendering of the proposed Hampton Inn & Suites to be built in Phase 2 of the Arsenal Yards project.

Residents received more information about the hotel planned for the renovated Arsenal Mall and the rest of phase 2, and gave it mixed reviews.

The 155 room Hampton Inn & Suites is planned to go in Building B, along with retail on the ground floor and a six level parking garage.

While Wednesday’s meeting focused on the plans for the second phase of the Arsenal Yards project, residents brought up other concerns, including the taxes that the project would pay to the town. Developers have requested a tax assurance from the town that would cap the tax rate for the project. Tom Wilder, of mall management company The Wilder Cos., said the tax estimates are still being calculated but it will be discussed at a later date.

“We want to have a forum on that when the information is available,” Wilder said. “It is still being gathered.”

He was also asked what would happen if developers did not get the tax assurance.

“The potential impact is (the project) may not happen,” Wilder said. “It is a very difficult market.”

Residents are also concerned about the traffic that will come with the hotel. Project Manager Jeff Heidelberg of Boylston Properties said the increase will be less than five percent looking at the total traffic from the entire mall project. Some at the meting noted that a traffic study in the materials submitted to the town shows the traffic for the hotel being almost double the amount from the 79-unit residential building – from 358 to 614 per day.

The most visible part of Phase 2 will be the hotel along Arsenal Street on the west side of the property, next to Harvard Vanguard Medical Associates. Originally, developers said they wanted to build a 79-unit residential building on the upper floors.

The hotel starts on the second floor and the corner of the east side of the building will have an outside area for people to gather, said architect Mark Eclipse. The rendering of the hotels shows decks on the floors at the western corner of the hotel.

Arsenal Street resident James Loughlin said he likes the idea of having apartments near the mall and the Charles River, but does not like the idea of a hotel in the new Arsenal Yards.

“Up to this time I was really impressed with what was done and that changed when you had a hotel replacing the multi-family apartment building,” Louglin said. “I’m totally against it.”

Others say they like the idea of another hotel in town. Resident John Labadini said there was no where for people looking for a place for guests to stay in Watertown until the Residence Inn (also owned by Boylston Properties) and now there would be a second option.

Arsenal Street resident Marcus Calegar, who used to work in hotels, said he thinks it would be a good addition to the development.

“It brings a lot of life to the area,” Calegar said.

Wilder said there will still be more than 400 residential units on the site. He said that the hotel is yet another use in the mixed use project and puts hotel guests near restaurants, shops and entertainment.

“A hotel is a great use for this kind of property,” Wilder said.

Resident Bruce Colton asked if the hotel is just the latest change to the project and wondered if it would soon change to office buildings.

The massing will be largely the same as when the building was designed to be a multi-family building, Heidelberg said. The second through fourth floor will be stepped back and then step back again for the top floor.

It will be built with a mix of brick, concrete and metal on the outside. The drawings shown at the meeting show grey bricks, which many at the meeting did not like.

Joyce Kelly, who is a member of the Historical Society of Watertown, said she thinks it should try to match the historic buildings.

“You should try to replicate the red brick and tie it to the rest of the site,” Kelly said. “The gray brick is pretty ugly.”

Head architect Eric Brown said the color of the brick has not been chosen, and it may have more of a brown color in it. However, Heidelberg said the intention is to make the new buildings look different from the existing ones.

Landscape architect Steven Woods assured those at the meeting that the new project would not have plants and trees in corrugated metal planters as can be seen in the parking lot in the current mall.

A couple residents said they worry that the loss of the inside area of the mall will impact teens and others who gather there, especially in the winter or really hot weather. Teddy Seidman, 16, of Watertown, said he and his friends will hang out at the mall.

“Now we can walk around, sit down and talk,” Seidman said. “It doesn’t look like is anything except to sit outside. This is a big place for teens to go. There is no other place.”

There will be a small interior section in the existing building near Marshall’s, Heidelberg said. Wilder said that indoor malls are failing, and even really large ones, like the Burlington Mall, are struggling. The trend is to have outdoor malls.