A drawing of the proposed residential/commercial project at 385 Pleasant Street.

A drawing of the proposed residential/commercial project at 385 Pleasant Street. Residents are upset about hte removal of the trees on the right side of the illustration, and noted they should not be shown in the drawing if they will be gone.

Residents living near a proposed mixed use project on Pleasant Street were upset about the prospect of removing a long berm and the trees on top of it. Traffic and the position of the driveways also concerned residents at Monday night’s Community Meeting at the Watertown Police Station.

The developers, Amstel Heritage Watertown LLC, want to turn what is now a parking lot and the former Fields Company building into townhouses, condos and commercial office space. The lot is long and thin – more than 1,000 feet long and as narrow as 55 feet – and the back of the site includes the berm where railroad tracks used to run.

The project includes 58 units, including 3 studios, 5 one-bedrooms, 14 one-bedroom lofts and 36 two bedrooms. The housing includes 30 townhouses in three 3-story buildings on the east side, 14 units in the existing brick building and another 14 units in a five story building west of the brick building. Nine of the units will be affordable housing. There will be more than 10,500 sq. ft. of new commercial space.

The plan calls for installing large windows in the brick building to give it a more appealing look, said architect Dartagnan Brown, principal of Embarc Studio.

To fit the townhouse buildings on the east end of the site, developers plan to remove the berm. Residents objected, saying that the long dirt hill and the trees that have grown on top provide a barrier between their homes and nearby Pleasant Street.

Waltham Street resident Debi Cornelius said that the view out the back of her home is the trees and berm.

Libby Shaw of Trees for Watertown said the group toured the area on the berm and she called it “a mini forest.” There are 52 trees at least 8 inches in diameter and 13 are 18 inches or larger.

“There is a very significant stand of green canopy that serves the neighborhood tremendously,” Shaw said. “It filters the air of all the stuff that comes from the industry and traffic on Pleasant Street and the noise is blocked.” 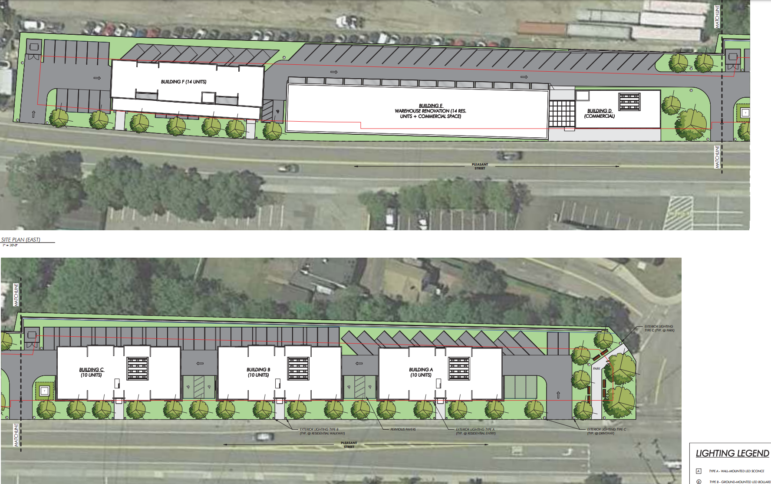 An overhead drawing of the proposed project on Pleasant Street at Rosedale Road, which includes 58 residential units, 12,674 sq. ft. of commercial space and a public park. The trees on the top of the lower photo will be removed under current plans.

Residents also complained that drawings of the proposed project and overhead photos still showed the trees, and they said that is deceiving.

Brown said that project designers would see if there is any way to save some of the trees, and that new drawings would be made without the trees.

Landscape Architect Blair Hines of Verdant said the plans call for creating a barrier with trees on the backside of the property, facing the backyards of the homes. This will go in front of a retaining wall that will be from 30 inches to six feet in height. The vegetated area will be about five feet wide.

“There will be evergreen trees as well as a fence to mitigate the view to the south without shading the yards to the north,” Hines said.

Developers will also be willing to donate trees to plant in residents yards who are impacted by the loss of the trees, said Bill York, the attorney representing the developers.

In the front of the property will be a 15 foot landscaped area in front of the residential buildings, Hines said, which will also serve as a way to clean stormwater as it percolates into the ground, and before it goes into the river.

Residents wondered if the landscaping in front could be decreased and be added to the back. York said that the Town requires a setback of at least 15 feet in front of a residential property.

The access for the site will be from enter-only driveways on either end of the development, and will leave through a central exit. Parking would be under the buildings, and would also include the current parking behind the brick building, Brown said.

A second community meeting is tentatively scheduled for July 27 at 6:30 p.m. at the Watertown Police Station. The focus of the meeting will be the traffic and parking for the project. York said the Town will hire an independent consultant to do a peer review of the traffic study that developers will present at the meeting. Designers also said they would bring illustrations of what the project would look like from different spots so residents will know what it would look like from their homes.

York said current plans are for the project to go before the Planning Board in August or September, and start work on the site in the winter or spring of next year.