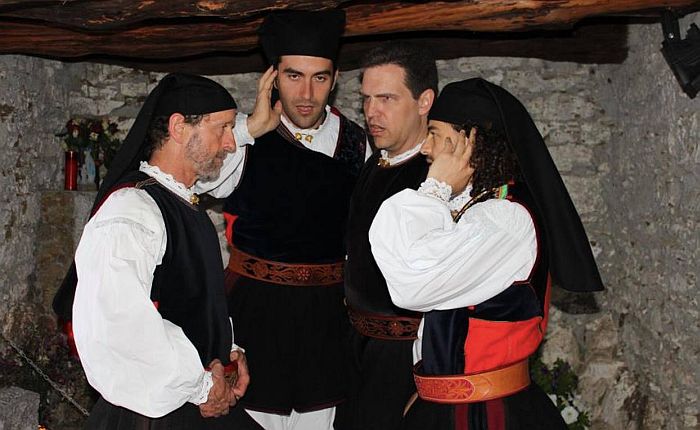 Revels singing group will be present a night of Mediterranean music and song with Tenores de Aterúe – in Concert in Watertown on Saturday Jan. 20, 2018.

Join us for a special night of traditional songs – and traditional singing (cantu a tenore) – from the Mediterranean islands of Sardinia and Corsica.

Sardinian cantu a tenore is a form of polyphonic singing by a group of four singers using different voices: bassu, contra, boghe, and mesu boghe. He deep guttural timbre of the bassu and contra voices produce ringing overtones, which are expanded by the mesu boghe. The rich aural texture is essentially a canvas for the boighe, who us the main soloist and sings almost all of the text. The song form is typical of the region of Barbagia and other parts of central Sardinia. Performances are often spontaneous and done in local bars, but also at more formal occasions, such as religious festivals. The lyrics are sometimes ancient, but may alos be contemporary poems on present-day issues such as emigration and politics, and they are connected to the island’s rich, poetic tradition.

Tenores de Aterúe formed in 2007 to study and perform traditional songs from the Mediterranean island of Sardinia. The entrancing guttural sounds, overtones, and rhythmic precision of the traditional singing form called cantu a tenore led UNESCO to declare it a “Masterpiece of the Oral and Intangible Heritage of Humanity” (2005.) The Tenores are the only ensemble outside of Sardinia that is dedicated to singing cantu a tenore.

Over the years, the Tenores have been in-demand performers on stages throughout the U.S., Canada, and Sardinia. They have appeared on VPR, New York City’s WFMU, BBC Radio, and on Sardinia’s Radio Barbagia and TCS Television.

Sample their music at https://tenoresdeaterue.bandcamp.com/