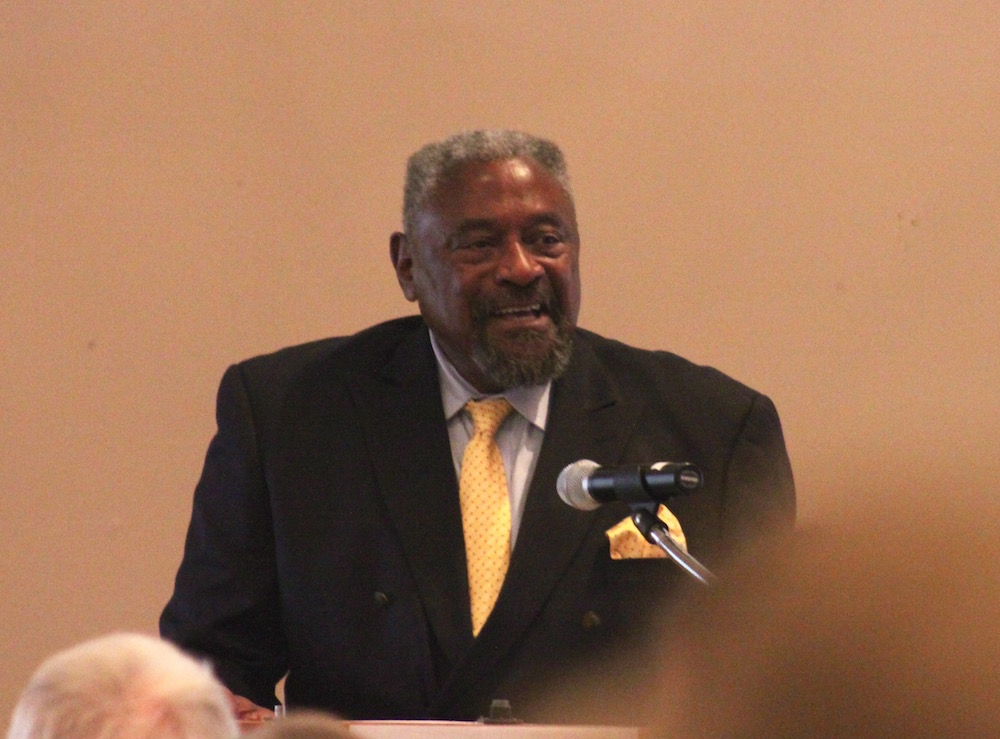 William "Smitty" Smith spoke about ways to improve the discussion about race in America through Amity at the 18th annual Unity Breakfast. 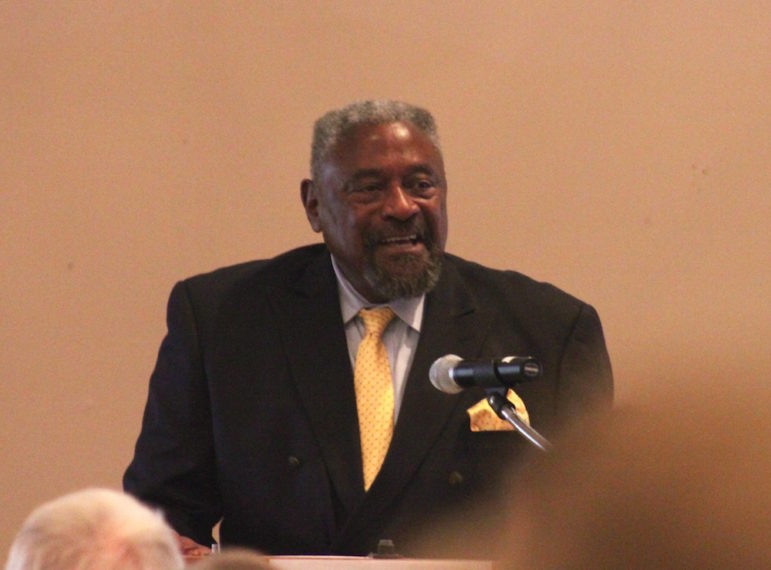 William “Smitty” Smith spoke about ways to improve the discussion about race in America through Amity at the 18th annual Unity Breakfast.

For the 18th year in a row Watertown celebrated the life of Martin Luther King, Jr., and his legacy during the Unity Breakfast. During the event the keynote speaker talked about his work to make the conversation about race in America a positive and productive one through friendship and love, and the head of the Watertown Boys & Girls Club received the Unity Award.

The morning also featured moving readings from the winner of the Watertown Middle School and High School MLK Essay Contest, and performances from singers and rappers. The event took place at the Hellenic Cultural Center on Monday and was sponsored by The World in Watertown.

William “Smitty” Smith has some credentials in working to improve race relations in the United States. In 1964 he was a member of the first class of black players to play football at Wake Forest in North Carolina – the first major college in the Southeast to integrate. He was community organizer in the Civil Rights Movement, and now he is the executive director of the National Center for Race Amity based at Boston’s Wheelock College.

Too often, discussions of race in America get “bogged down in blame, grievance and rejection,” he said.

“Attempts on dialogs on the injustice of racism often gets off to an optimistic start, but most times – and I’ve been at this for five decades – sooner or later things get toxic as the point-counterpoint of blame, grievance and rejection play out,” Smith said. “Race relations in America will not substantially improve unless the public discourse on race moves from the blame, grievance, rejection framework and moves to one which recognizes and celebrates our ability to overcome racial prejudice through association, amity – friendship, and the collaboration represented by what we at the center call the other tradition.”

At the same time that racial oppression was occurring in the early history of the country, another tradition was starting, Smith said, one of close loving friendship and collaboration by people of different races and backgrounds.

He pointed to several instances of people becoming friends and working together. In Colonial times, Charles Thomson (who went on to become the most one of the powerful leaders during the time of the founding of the nation) became friends with Chief Tishcohan of the Delaware Nations by protesting contracts made with Indians in Pennsylvania because they were unfair to the Indians. Later the Delaware Nation refused to join the French side in the French and Indian War.

Smith also talked about famed Underground Railroad leader Harriet Tubman and her friendship and collaboration with William Seward to help her family escape slavery and later assisted 2,700 former slaves get to the North. Smith lamented that while Tubman is a household name, school children are not taught about Seward’s role in the Underground Railroad.

Through these friendships, Smith said he believes the conversation about race can change in American. Smith now works to spread Racial Amity, and he encouraged the Watertown – and the World in Watertown specifically –  to organize a local recognition of Race Amity Day, which takes place on the second Sunday in June each year. 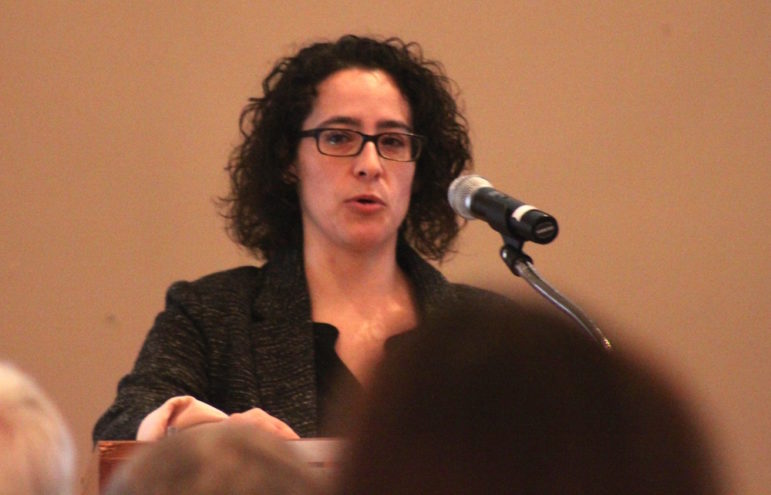 Each year, a person or organization from Watertown is honored with the Unity Award for the work they have done in the community. This year’s recipient was Renee Gaudette, executive director of the Watertown Boys & Girls Club.

She attended the club as a child, and it helped her not only become a star high school basketball player but also allowed her to become friends with people she would probably never have met. This still happens.

One example she shared was an 18-year-old member with autism who loves to attend the Club’s summer program at Camp Hale, but he usually does activities on his own or with his aide. This year, however, he was befriended by a 7-year-old girl, who decided to eat lunch and build sandcastles with him – while others were swimming and doing other activities – after she learned that he liked the way that sand feels going through his hands. She even bought him a birthday present with her own money, Gaudette said. 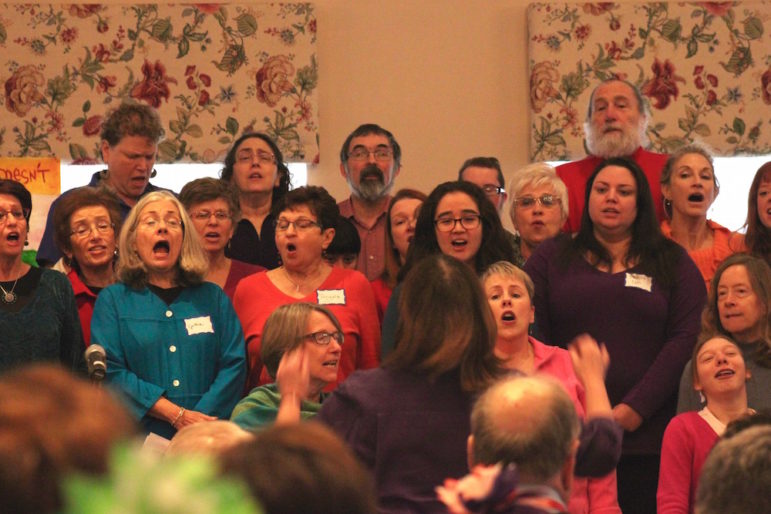 The Club serves about 1,000 youngsters age 7 to 18 from Watertown, Gaudette said, and many come from some of the more at-risk situations. One-quarter are from families where English is not the primary language and one-fifth are from single-parent homes.

Gaudette hopes to spread the passion for service with the club members, and said a group from the club recently volunteered to stack shelves at the St. Patrick’s/Sacred Heart Food Pantry.

In October, the Boys & Girls Club kicked off a $1.4 million fundraising campaign to renovate and expand the club, located on Whites Avenue. Gaudette said one of the features will be a Teen Center.

Gaudette thanked the organizers for the award.

“I am deeply honored and humbled to receive the Unity Award,” Gaudette said. “As mentioned, I became a member of the club when I was 7 years old. The club taught me so many valuable lessons as a young person, among them acceptance of those different from ourselves, lending a helping hand to those in need, and resolving conflict through communication and respect rather than violence.

“I feel so incredibly fortunate to be able to teach these values to the next generation of club kids.” 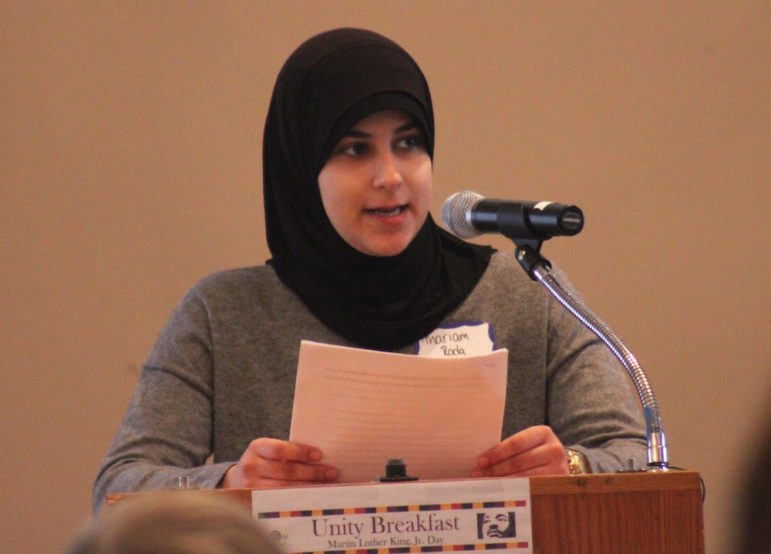 Each year, Watertown students write about experiences where they have faced discrimination or have been unfairly treated and how they dealt with it using the teachings of Martin Luther King, Jr.

The winners were chosen from 160 entries at the middle school and 79 at the high school.

WHS student Mariam Roda wrote about an experience she had while taking the T to the Boston Women’s March in January 2017. On the crowded subway, she noticed an obviously drunken man who was making louder and louder comments while looking at Roda and her friends. Eventually Roda, who wears a hijab, could hear the man make references such as “towel head” and “terrorist.” People in the crowded car could clearly hear the man, Roda said, but they did not say anything.

When the train got to the stop where everyone got off, including the man, Roda and her friends noticed the man had left behind his Samsung cellphone along with the paper bag in which he had his drink. Some on the train laughed and joked about putting it on the train tracks. However, Roda and her friends said they knew how much such a phone costs and how bad they would feel about losing it. They picked up the phone and found the man to return it to him.

Roda did not hand the phone to the man, but their eyes met.

“It was easily one of the most intense moments I have experienced in my 17 years of living,” Roda said.

She added that she often thinks about the events of that day, and wonders if the man deserved to get his phone back and why he acted the way he did.

“The situation was dealt with in a peaceful, tolerant and forgiving way. We could have easily left his phone on the train or like those around us said put it on the tracks,” Rota said. “We could have retaliated to his hatred with hate, and fought fire with fire. We could have stirred up trouble and gotten kicked off the train, but that is not the example of that Martin Luther King, Jr., set for all of us.” 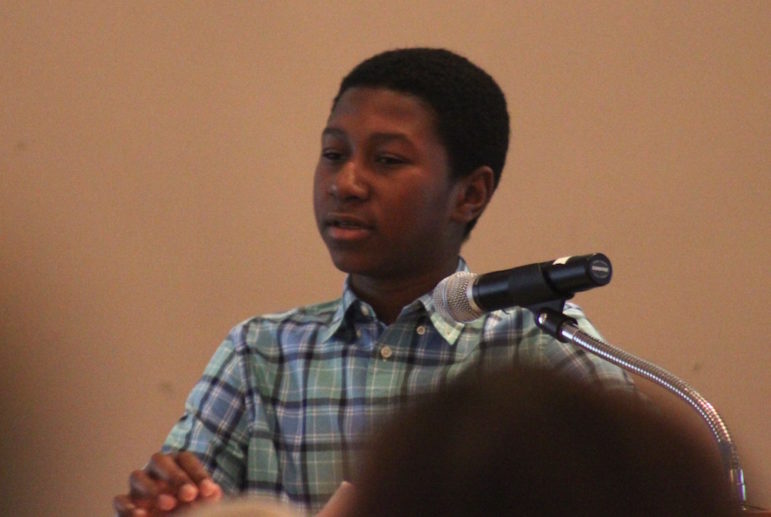 Watertown Middle School student Frederick Labossierre wrote about his experience of subtle and not so subtle racism as a young African American.

Sometimes he even hears friends joke about how he can’t swim, must love chicken or joking about how he might steal their belongings.

“These are a few of the stereotypes that may seem innocent to some but offensive to others,” Labossierre said. “People who use them are not bad, but they repeat what they heard around and continue the circle without knowing it. They laugh and when you say its offensive, they say, “You are my friend. How can I be racist?

“Friendship is about respect and acceptance. How can you not believe me when I say I experience racism? How can you be my friend and not care about my feelings?”

Lebossierre said he hopes people can listen to each other and empathize.

“The world would be a such better place if we were willing to listen to the other side and walk a mile in their shoes,” Labossierre said. “As kids we may not be able to much to change the problem but we can all contribute in our own way and by being more tolerant and embracing our differences.” 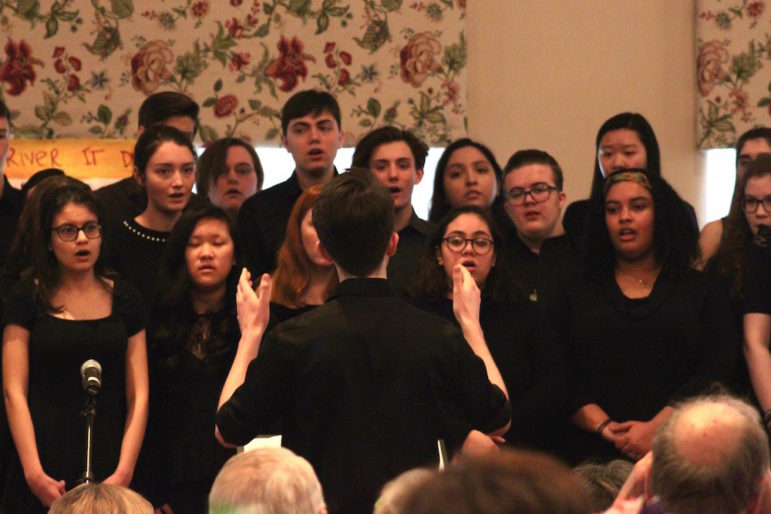 The Watertown High School Watertones sang during the Unity Breakfast at the Hellenic Cultural Center.

Also at the event, Watertown Police Chief Michael Lawn spoke about the WPD’s commitment to protecting all residents, regardless of their citizenship status. He talked about the Police Department’s new policy on working with immigrants. (Read more here).

Those at the breakfast were entertained by rappers from the Middle School Kingian Nonviolence Project and singers from the Greater Boston Intergenerational Chorus and the Watertown High School Watertones chorus.

Breakfast was provided by the Deluxe Town Diner.