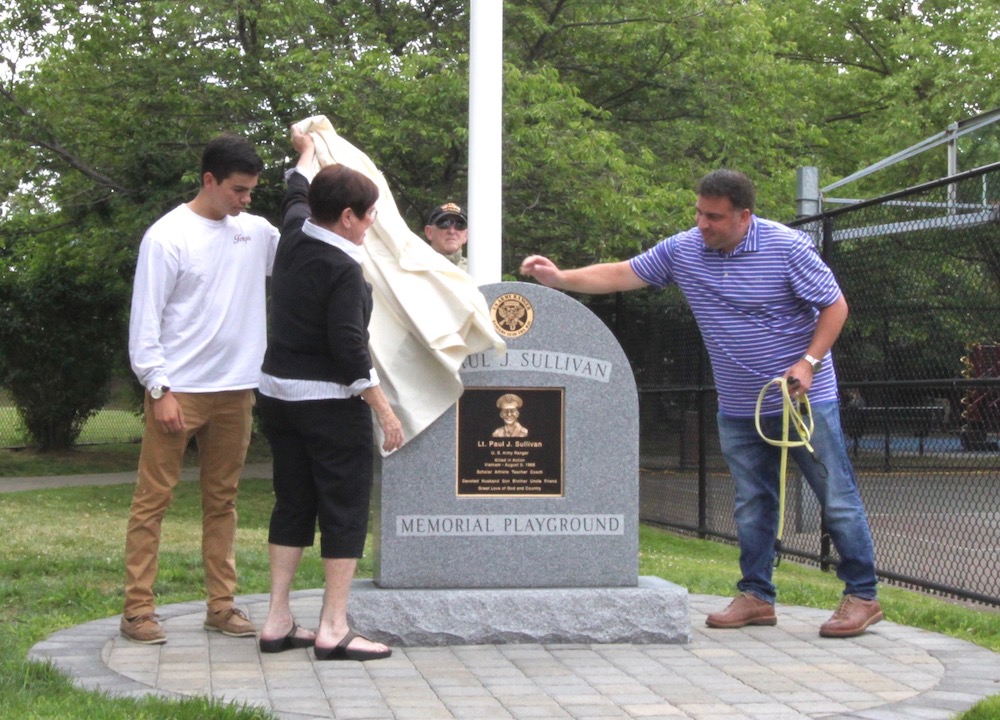 The memorial stone for Lt. Paul J. Sullivan was unveiled by his wife Margie, and his nephews Paul Joseph Sullivan and Paul Joseph Donato. 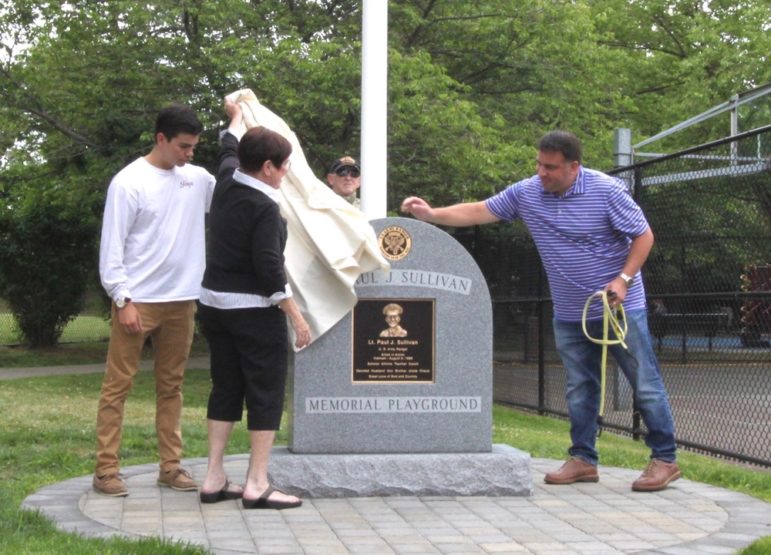 The memorial stone for Lt. Paul J. Sullivan was unveiled by his wife Margie, and his nephews Paul Joseph Sullivan and Paul Joseph Donato.

The smile of a fresh-faced young man in uniform beams from the bronze plaque on the stone recently placed on Arlington Street, but the marker is a memorial to the young man with a bright future who lost his life serving his country 50 years ago this summer.

On Sunday, family, friends and community members came to the unveiling of the Lt. Paul J. Sullivan memorial near the corner of Arlington and Mt. Auburn streets, along with a flag pole dedicated to all who served in the Vietnam War.

Dozens of Sullivan’s family members came to the event — brothers, sisters, nieces, nephews and even grand nieces and nephews.

Among those in attendance was Sullivan’s widow Margie Edson, who helped unveil the stone with two of Sullivan’s nephews, Paul Joseph Sullivan and Paul Joseph Donato. Edson grew up in Waltham, but now lives in California, comes back every so often for the banquet for the Lt. Paul J. Sullivan Scholarship.

“This one is super important because it has been 50 years,” Edson said. “It is wonderful this keeps going in his memory. He would be so proud.” 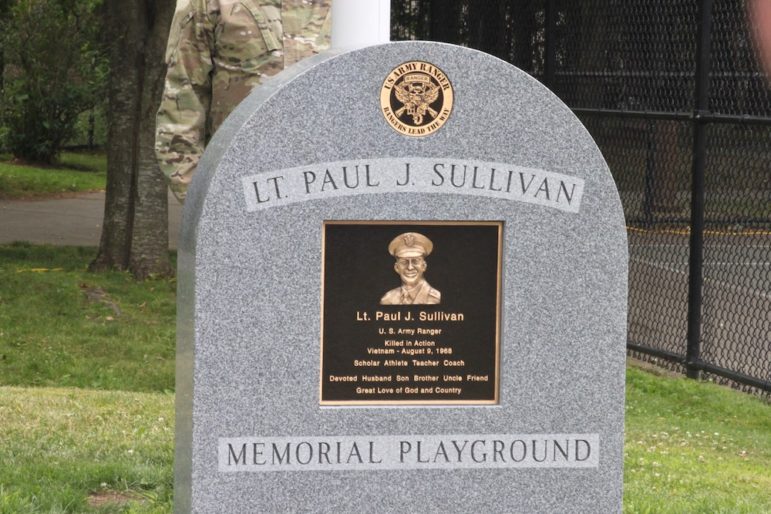 The Lt. Paul J. Sullivan Memorial sits next to the playground named after Sullivan, on the corner of Arlington and Mt. Auburn Streets.

Margie met Sullivan when they were in high school, and the pair married in 1967, a year before he went to Vietnam.

“He knew he was going to be drafted so he went to officer training school. He wanted to to be an officer, he was a leader,” Edson said. 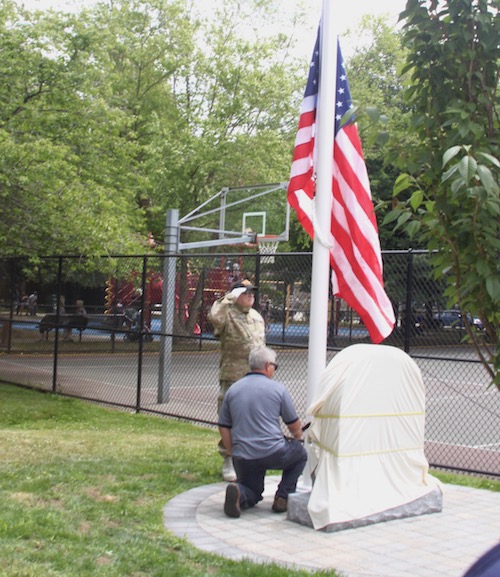 Along with the memorial to Paul Sullivan, the memorial includes a flag pole dedicated to all who served in the Vietnam War.

Jim Nelson shared his memories of Sullivan during the dedication. The pair met when Nelson’s family move to Mt. Auburn Street. The pair attended Sacred Heart Church and played CYO (Catholic Youth Organization) sports together. Nelson called Sullivan his best friend, but he has no doubt that there are many others who could say the same.

Nelson remembers Sullivan as a creative, ambitious, and caring individual, who was also generous, tolerant of other’s shortcomings, and wanted to see them do their best. As a athlete, Sullivan competed hard, but he never cut corners to take unfair advantage, Nelson said.

Both attended Boston College together (where Sullivan played baseball and Nelson played basketball), but before that the two were opponents on the court.

“He went to St. Mary’s in Waltham and I went to North Cambridge Catholic Prep,” Nelson said after the ceremony. “I always did not look forward to playing St. Mary’s because Paul was a terrific competitor. I knew it was going to be a long evening or afternoon.”

Another one of Sullivan’s qualities that stood out for Nelson was that, “He never asked somebody to do something that he would not do.” 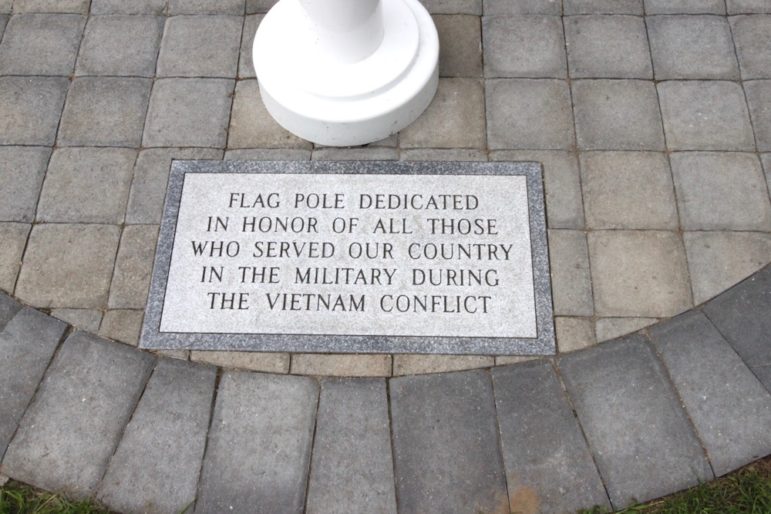 The plaque dedicating the flag pole to all who served during the Vietnam Conflict.

Sullivan had opportunities to avoid combat, Edson said, including an offer to run the athletic program at Fort Benning. Sullivan wanted to become a guidance counselor and he wanted to have the experience of being in the military so he could advise students.

“Had he lived, he would have been a great example for people going into the military,” Edson said.

Nelson noted that Sullivan will “forever young in our eyes,” but not just because he is a 24 year the photo that was used to make the plaque. He will always live on in the form of the young winners of the scholarship bearing Sullivan’s name. On Saturday night the 51st winner (two people shared the scholarship one year) of the Lt. Paul J. Sullivan Scholarship, Watertown High’s Elizabeth Powderly, received the scholarship award.

While the basketball courts and tot-lot has borne Sullivan’s name since 1969, Paul’s brother Tom said people began to talk about creating a memorial plaque for Sullivan. The idea came from Paul Bedrosian —  who considered Paul Sullivan the big brother he never had, Tom said. They raised the money through the annual Paul Sullivan Golf Tournament and through donations.

“It was very nice, very rewarding, between last night (at the Scholarship Banquet) and today,” he said.

One thought on “Memorial to Paul Sullivan, a Bright Young Man Killed in Vietnam, Unveiled in East Watertown”