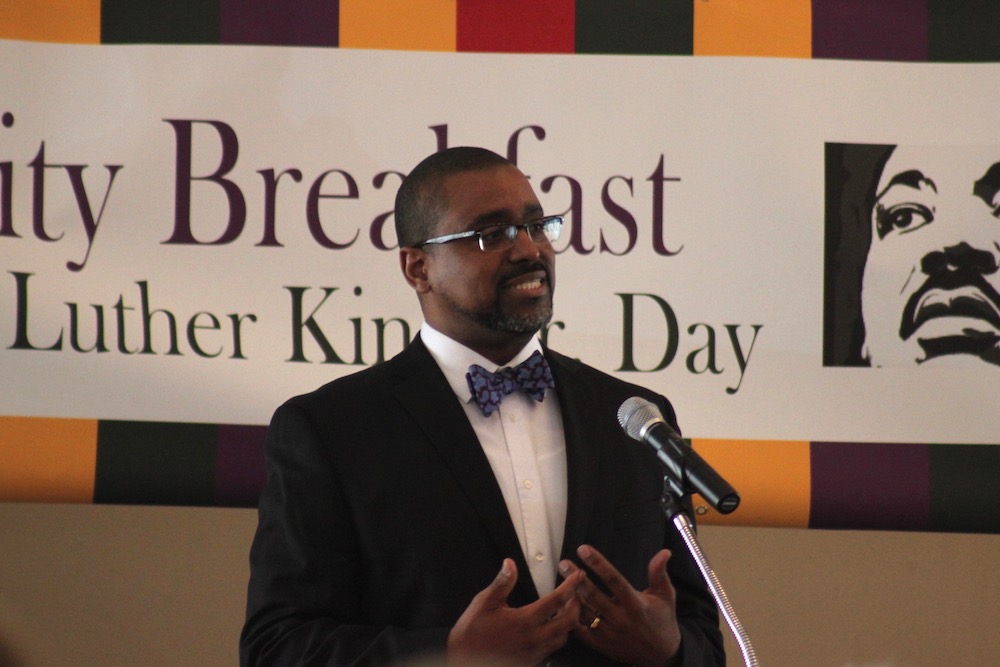 Rahsaan Hall gave the keynote address at the 2019 Unity Breakfast. He is the director of the ACLU of Massachusetts' Racial Justice Program.

The 19th annual Watertown Unity Breakfast not only celebrated the legacy of Martin Luther King Jr., on Monday, but also paid tribute to two people who have been regulars at the event as they say farewell.

Despite the frigid and icy conditions on MLK Day 2019, the Hellenic Cultural Center was packed for the event presented by World in Watertown. Those in attendance heard from a member of the ACLU of Massachusetts about how the fight against racisms not over, and also were addressed — perhaps for the last time — by Rev. Mark Harris, minister of First Parish of Watertown, and Watertown Police Officer Harold “Tony” Physic.

Harris has been a fixture at the First Parish Unitarian Universalist Church, and in Town for 23 years. He was also a founding member of World in Watertown and a driving force behind the creation of the Unity Breakfast.

“This event was Mark’s vision, which he promoted for many years and presided over as chief organizer and emcee,” said World in Watertown member Larry Raskin. “We are here today because of him to mark this gathering is symbolic of our deep caring for one another as a community. Thank you, Mark.”

Harris has often been part of efforts that honor MLK’s legacy of non-violence and seeking social and racial justice, Raskin said, including being part of many protests in town and organizing a group from Watertown to join the Mother’s Day Walk for Peace in Dorchester. Will Twombly, who is part of the Unity Award committee, added that among Harris’ many social justice works are being a volunteer instructor in the adolescent assault awareness program at Watertown Middle School, and that he has opened the church to many groups serving residents.

“Honoring Mark today is especially timely and sad in a way, as this will be his last year in Watertown before he and Andrea retire to Maine,” Twombly said.

Harris thanked the organizers for presenting him the Unity Award.

“I am both grateful and humbled by your words,” Harris said.

He added that a ministry is “never a solo effort,” and requires collaboration between a clergy person and others working together, including community members and other members of the clergy. He also pointed to the large contribution his wife, Andrea Greenwood, has made.

“Most of my ministry, I have to admit, has been a sheer adventure with my wife,” Harris said. “Even in those times when she has not had the official title, she has constantly ministered to members of our congregation and in the community.”

Greenwood gave the invocation to begin the Unity Breakfast.

Harris said he would like to see the Unity Breakfast continue as a major annual event in the community.

“I don’t mean exclusively as something I started, but as a symbolic event that we all need to strive to make the place we call home more open to all kinds of people, so that everyone who lives here or visits here feels as though this is truly welcoming place where all people are warm and friendly,” Harris said. “And ultimately that we are trying to create a place that honors diversity and encourages it in the workplace, in our schools, and in our public servants.

“As MLK would have us strive toward freedom, may we strive and continue to strive to create a more just and equitable place here for all,” Harris said.

Farewell from a Fixture on the WPD

Monday’s event was hosted by Tony Physic, who has been a patrol officer in Watertown 34 years. He has also become involved in Watertown’s Kingian Non-Violence Training, first as a student and then as an instructor. Physic is also a familiar face to Unity Breakfast attendees. In 2011, he was honored with the Unity Award.

Physic talked about growing up as an African-American in Boston during the 1960s, and recalled the day that Martin Luther King Jr. was assassinated. He was 14 years old at the time.

“The oldest of my sisters took me to a concert the day after — we went to James Brown, the Godfather of Soul,” Physic said, remembering that Boston Mayor Kevin White made the decision to go ahead with the long-planned concert. “It was important. It kept Boston from burning.”

During his time with the Watertown Police, Physic has made it a priority to get to know the people of the community.

“Some people believe police officers are not supposed to be as close to the community, but I choose to,” Physic said. “If you give to your community, your community will give back to you and love you.”

As he was saying that he has enjoyed working in Watertown, and adding that Monday was a day of firsts and lasts, Physic choked up at the podium. Watertown Police Chief Michael Lawn came up to lend support.

“What Tony is trying to say is that he has to retire this May when he reaches the maximum retirement age,” Lawn said. “He is going to be a tremendous loss to this department.”

Lawn added that Physic loves serving the residents Watertown, and has spent many of those years on the East Watertown beat. Just the day before, Physic was on patrol when an 85-year-old man collapsed with massive heart attack while shoveling snow.

“Tony performed CPR by himself until the ambulance arrived,” Lawn said. “The man is still alive, at Mount Auburn Hospital.”

Keynote speaker Rahsaan Hall director of the ACLU of Massachusetts’ Racial Justice Program talked about how, despite the progress that has been made toward ending racism, much work remains for America to fulfill MLK’s vision.

Hall said that he believes it is important for people to cast a vision of a world that they would to live in. His vision is to have a world with no prisons.

“People may say that is a ridiculous notion, but there was a point in this nation’s history when the abolition of slavery was a ridiculous notion, so we have to begin to talk about the world in the way we want to see it,” Hall said. “(I want to see) the way that we don’t rely on safety and security by putting people in cages, but that we are investing in people and alternatives to punishment and incarceration that are rooted in restoration, transformation and wholeness.”

Hall acknowledges that the world today is better for African-Americans than it was when King was killed in 1968, with more people who have friends who are not white, and people would no longer leave their home because someone who is not white moved in next door. However, he said that people should not be satisfied or complacent, and disputed the notion of a Post-Racial America.

“For a lot of people this is not the reality,” Hall said.

Looking back at a 1968 speech that MLK made called “The Other America,” Hall said he still sees some of the same problems that King highlighted — a lack of hope and self-worth among many African Americans.

“I say today, although things are better, you need to critically analyze and interrogate our notion of what better is,” Harris said. “Yes, there aren’t people getting lynched in the South anymore. Yes, there are fewer instances of people being openly called the ‘N word’ or any other racial epithets — but it is still happening — but what is more important, what is more challenging are the overwhelming and gross racial disparities that exist in society today. And it is not just because of happenstance.”

Hall said that communities of color look that way not because “people are lazy and apathetic.” He blames “a function of systemic oppression and denial of opportunities.

“There’s this seamless threat that runs through this nation’s history from slavery up through mass incarceration,” Hall said.

Some point to the fact that other immigrants have come the U.S., and faced discrimination, but have been able to overcome that to succeed. While many African-Americans have been able to thrive and succeed, Hall said, there is an “overwhelming, disproportionate number of African-Americans” who have not had that opportunity. Some of the obstacles, he said, were systematic and promoted by governments.

Starting with Black Codes — following the Abolition of Slavery — where African Americans who did not comply with the codes could be forced into unpaid labor. That was followed in the 1870s by Jim Crow Laws that legalized segregation. Hall also pointed to the Social Security Act of 1935 excluded day laborers, agricultural workers and domestic workers, which were jobs that many, many African-American had. Even the G.I. Bill, he said, was denied to African Americans in disproportionate numbers.

Hall contended that President Lyndon Johnson’s War on Crime led to the construction of more prisons and the building up of law enforcement and prosecution offices.

Hall challenged those at the breakfast to not just be comfortable with the current state of race relations, but look at their “privilege and positions of power” to see how they can help make American a meritocracy “where people are truly judged by the content of their character and where freedom and justice are truly for all.

“So, I urge you to continue to fight this good fight to continue to work toward building this beloved community, but to not become complacent with the constructs of comfortability and really challenge yourselves a those around you so that we can be a truly more fully embracing unified Watertown, Massachusetts and America,” Hall said.

The winning Middle School essay was written by eighth-grader Constantino Themelis, who wrote about his experience organizing a school walkout in reaction to the school shooting in Parkland, Fla.

Lana Taffel, a 10th grader, won the High School competition for her piece about her experiences with her sister, who is autistic, and the ways that her sister is treated differently by people, even extended family members.

Each year, the Unity Breakfast features entertainment and other presentations. This year, those gathered saw performances by the Legacy Juniors Hip Hop Team from the Watertown Boys & Girls Club, as well as the songs of A Besere Velt (which means A Better World). The group is based in Brookline, but has members from Watertown and other communities, too.

Students involved in the Kingian Non-Violence Program presented a public service announcement video which they made. In it, the students talk about why they believe combating racism is important.

Ruth Henry, the WMS teacher who runs the program, also talked about the mural depicting MLK’s six principles of non-violence on the back of the Watertown Boys & Girls Club. She noted that at last year’s Unity Breakfast she announced her interest in doing a mural and asked for people to come forward to help. The mural was dedicated in June 2018.