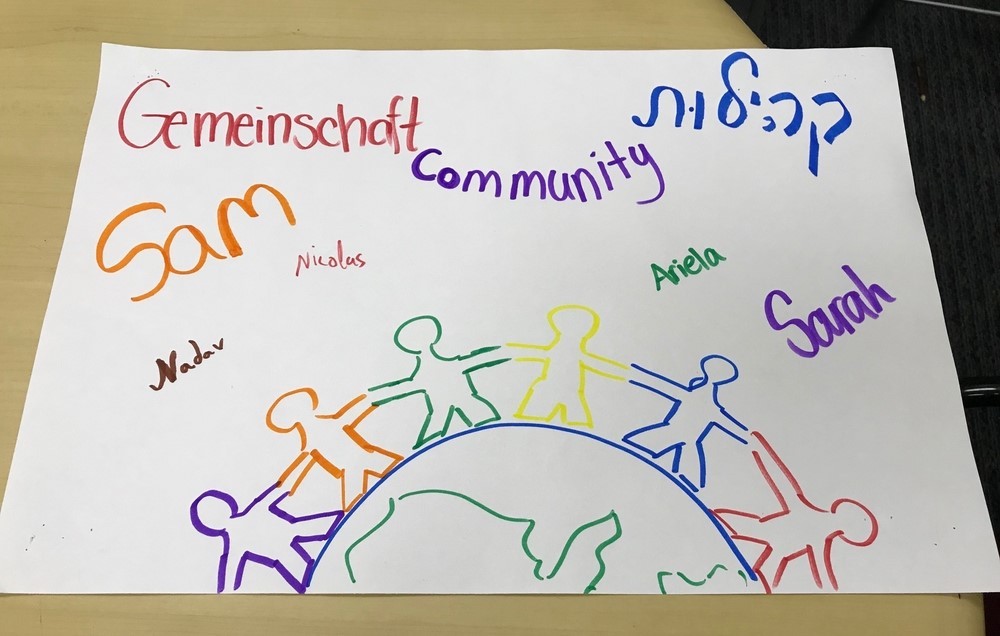 An inspirational drawing created by students at JCDS and GISB.

The following information was provided by Jewish Family & Children’s Service:

This spring, Jewish Family & Children’s Service was thrilled to host a very special group of volunteers.

Seventh graders from Jewish Community Day School (JCDS) in Watertown and German International School Boston (GISB) visited our Waltham headquarters to make birthday cards for clients of our Schechter Holocaust Services program. The collaboration between the two schools was part of an ongoing partnership between JCDS and GISB that focuses on Holocaust education.

The Holocaust education program between Jewish Community Day School and German International School Boston was first launched in 2017 by Andrea Silton of JCDS and Andreas Weber of GISB. When the two Middle School teachers were put in touch as part of a comparative religion course, they realized that they had a unique opportunity to explore the difficult history between Germans and Jews.

All of the students at JCDS are Jewish, and many of the students who attend GISB are from Germany, Austria, or Switzerland, or have parents with roots in these countries. Silton and Weber wanted to put together a curriculum that would bring together their students, some of whom are the great-grandchildren of Nazis and the great-grandchildren of survivors, to confront the shared legacy of the Holocaust.

The interschool program between JCDS and GISB is an expertly crafted mix of cultural exchange, wrestling with the past, and applying the lessons of history to the present. Before delving into the more challenging parts of the curriculum, students from the two schools engaged in activities where they could socialize and discuss the ways in which they are similar and the ways they are different.

A combined Christmas and Chanukkah celebration was a fun way for students to share their favorite holiday foods, music, and traditions.

“They really do become friends,” said Andrea Silton. “Some of the boys are on the same soccer team, and some of the girls text each other and follow each other on social media. My students are always asking when they will see the kids from GISB again.”

In addition to more lighthearted activities, the shared curriculum does tackle the history of the Holocaust head-on. Students in both schools read and discussed the book An Orange in Winter, which tells the story of the Holocaust through the eyes of a young Jewish boy and his German friend. The middle schoolers were also visited by speakers from Facing History and Ourselves, a Brookline-based non-profit dedicated to educating students about racism, prejudice, and antisemitism.

As part of the Facing History program, students heard from the granddaughter of a Holocaust survivor and a German woman whose grandparents were Nazis. Andreas Weber found it “very impressive to see how the students were listening to the speakers and their personal stories and how they were asking their questions.”

During workshops and meetings, the students at both schools came up with the idea of doing some sort of service project together. Andrea Silton had previously visited JF&CS with a fifth grade class and realized that volunteering with our Schechter Holocaust Services program could be a meaningful way for seventh graders to observe Yom HaShoah (Holocaust Remembrance Day).

Students from JCDS and GISB came to our office in Waltham and created beautiful handmade cards that will be sent to Holocaust survivors on their birthdays. When our Volunteer Services Manager, Ava Harder, explained that these birthday cards may be the only one a survivor receives, the seventh graders were keenly aware of the significance of their artwork. The students took great pride in their cards and added a “made by” credit on the back of each one they carefully crafted.

The middle schoolers also heard from Lora Tarlin, the Director ofSchechter Holocaust Services, who spoke about the Yom HaShoah commemoration that had occurred the day before in Boston. The students listened with rapt attention and asked many insightful questions. Reflecting on his students’ volunteer experience, Andreas Weber noted that visiting JF&CS “was another important keystone” in the interschool curriculum that promotes “confronting the history of the Holocaust, beginning to move forward together, building bridges, and making the world of the future a better place.”

Andrea Silton echoed Weber’s sentiments, saying, “Two groups coming together around Yom HaShoah for something like this is a testament to the fact that we can make the world a better place. Because in 1945…who would have thought?”

If you’re interested in getting involved with Schechter Holocaust Services or one of our other programs, visit our Volunteering page.

For more than 150 years, Jewish Family & Children’s Service has been helping individuals and families build a strong foundation for resilience and well-being across the lifespan. Through an integrated portfolio of more than 40 programs reaching communities throughout Eastern and Central Massachusetts, JF&CS focuses on meeting the needs of new parents and their children, older adults and family caregivers, children and adults with disabilities, and people experiencing poverty, hunger, or domestic
abuse. Learn more at jfcsboston.org.