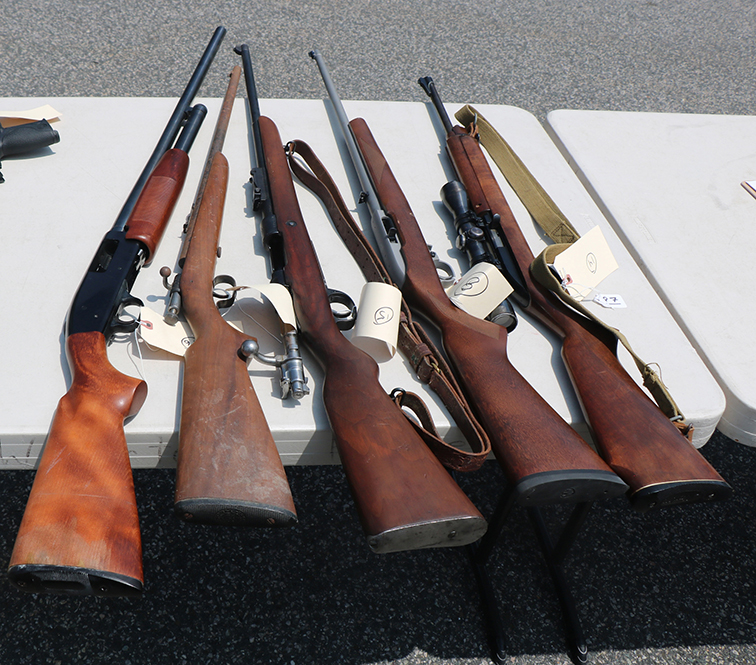 Some of the weapons collected in Watertown and Belmont in the MIddlesex Sheriff's gun buyback in June.

The following information was provided by the Middlesex Sheriff’s Office:

The initiative – held June 8-29 – was a collaborative effort of the Arlington, Belmont, Cambridge, Newton and Watertown police departments, in conjunction with the Middlesex Sheriff’s Office as well as faith- and community-based partners. This was the second regional buyback held in Middlesex County since 2016, with a total of 270 weapons exchanged for gift cards during the two regional initiatives.

“I want to thank all our partners for their leadership in this area, and allowing us to continue to support these important community-based efforts,” said Middlesex Sheriff Peter J. Koutoujian. “Offering residents these opportunities to safely remove unwanted and unsecured guns reduces the chances of theft or accidental discharge, making our homes and our communities safer.”

Included among the 120 guns accepted on the days of the events was a loaded .22-caliber pistol in Newton. The individual disposing of the gun was unaware that it was loaded.

“The loaded firearm that was turned in is an example of why this was such an important effort,” said Newton Police Chief David MacDonald.  “Any adult or child could potentially have mishandled it in the home and caused an avoidable tragedy. A special thank you to Sheriff Koutoujian and his staff for their hard work and professionalism as well as our citizen volunteers.”

“The collaboration between our regional partners and faith-based organizations, made this year’s gun buyback a tremendous success,” said Watertown Police Chief Michael Lawn. “The Watertown Police Department is proud to be part of this important initiative in making our entire region a safer place to live and work.”

“This important event continues to grow each year with more and more community support,” said Cambridge Police Commissioner Branville G. Bard, Jr. “Working with our local regional partners and providing ways to dispose of unwanted firearms is making our communities and homes safer places to live by limiting the unintended access to these weapons.”

“The Belmont Police Department was extremely pleased to be a part of this regional effort to make our communities a safer place to live and work, as well as working with our regional partners and the faith-based organizations.” said Police Chief Richard McLaughlin.

“This year’s regional gun buyback program was a tremendous success, and I would like to sincerely thank Sheriff Koutoujian for his leadership in helping to ensure that 120 fewer guns are in circulation,” said Arlington Police Chief Julie Flaherty. “Just one unwanted firearm turned in for destruction can represent many fewer chances for a tragedy in the home.”

Since 2013, the Middlesex Sheriff’s Office has assisted 12 municipal departments, with 25 total buybacks, resulting in over 1,100 unwanted weapons turned in.