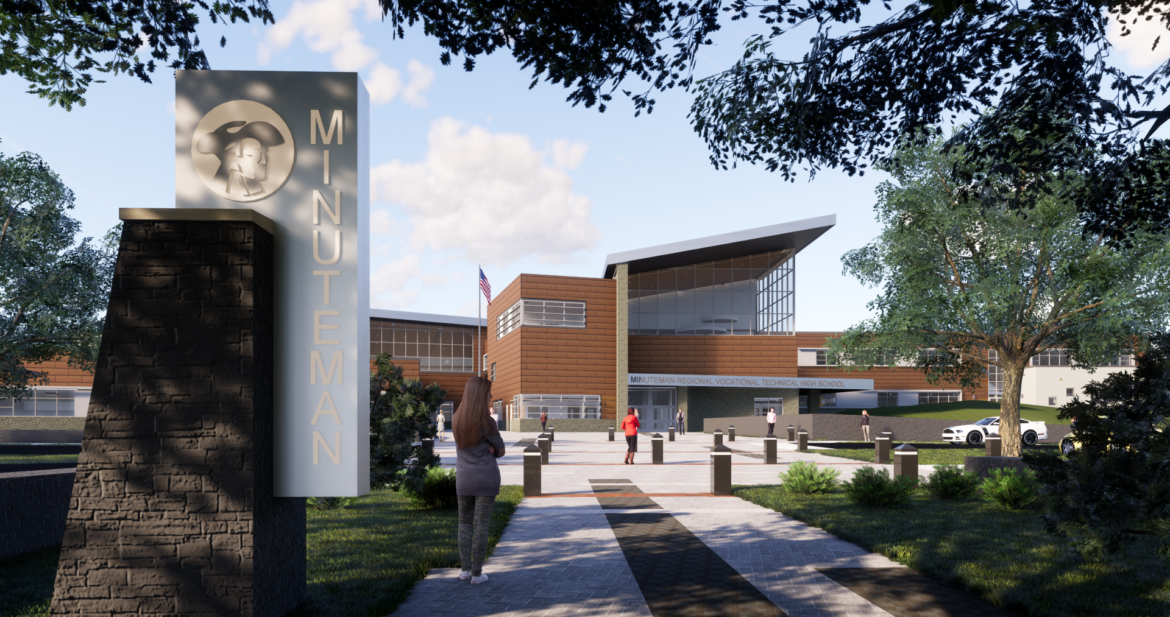 A rendering of what the new Minuteman High School will look like when it opens this fall.

When students arrive at Minuteman High School on September 3, it will mark the start of a brand new school year – and the beginning of an exciting, even historic, era for Minuteman itself.

On that day, the doors will swing open for the first time at the new Minuteman High School, a $145 million, state-of-the-art facility some 11 years in the making.

“It’s all I hoped for and more,” said Minuteman’s Superintendent-Director, Dr. Edward A. Bouquillon, who shepherded the project from conception to completion. “It exceeded my expectations in regard to design, quality and the practical, efficient use of space.

“It’s a beautiful place. The students are going to be surprised at how much it resembles a college.”

Dr. Bouquillon’s first day on the job at Minuteman was July 1, 2007, and he said that within six months, he realized that “the facility was in need of a lot of work.” In November 2008, a letter of interest was submitted to the Massachusetts School Building Authority, a state entity that reimburses cities, towns and regional districts such as Minuteman’s for a portion of the cost of school construction or renovation.

There would be myriad hurdles and challenges to be navigated over the next decade. However, Dr. Bouquillon and the diverse team of people who made the dream of a new Minuteman High School come true persevered, certain of its immense value to students. In fact, he cites the prospect of attending the new school as one significant reason for the impressive size of the incoming freshman class – 200 students, the largest freshman
class at Minuteman in 30 years.

The other two reasons Dr. Bouquillon mentioned were the fact that parents and guardians of prospective Minuteman students recognized the importance of career and technical education. He also lauded the “great job” that Minuteman’s admissions personnel did at middle schools in the district presenting the benefits of a Minuteman education to students. Dr. Bouquillon thanked those middle schools for granting Minuteman’s admissions staff access to their students. He also expressed his appreciation to the five parent liaisons who were hired by Minuteman “to get us access into the community in a deeper way. They got us into places we couldn’t get.”

“They have answered phone calls and emails from prospective parents. They have held presentation events. They have been at our admissions events. They are very passionate and share their experience that resonates in ways a marketing piece cannot,” he said.

Mr. Clement pointed out that Minuteman was awarded a prestigious National Blue Ribbon Award by the U.S. Department of Education last year, which he believes is another factor in the school’s appeal to students and parents.

The new Minuteman High School was designed for 628 students. Dr. Bouquillon said that next year, 190 students will be accepted; the following year, 180. Right now, though, Dr. Bouquillon cautioned that the new building is “an active construction site until August 23, Prior to that, no one should be there unless they are administrators, custodial or operations staff.”

The school received a temporary occupancy permit on July 25, and expects to get a permanent one around Aug. 23. Minuteman’s administrators plan to be set up in the new building by Aug. 5. During that week, the Internet and phone system should be up and running.

Parents and guardians can anticipate a mailing in early August informing them of an upcoming orientation session about the new building. The first day of school will be early release and is for freshmen and juniors. Dr. Bouquillon said that they can expect to be assigned laptops, have a tour of all the vocational areas and do a walk-through of the school, receive their schedules and IDs, and get binders for their portfolios.

In the fall, there will also be a series of open houses at Minuteman targeted to specific audiences. For example, in addition to parents, various business groups and others will be welcomed in to view the school’s salon, daycare center, auto repair shop, restaurant, culinary arts department, and corporate meeting rooms.

As an accredited member of the New England Association of Schools & Colleges (NEASC), Minuteman inspires all students to attain their full potential, accelerate their learning, and become purposeful citizens in the
global community.