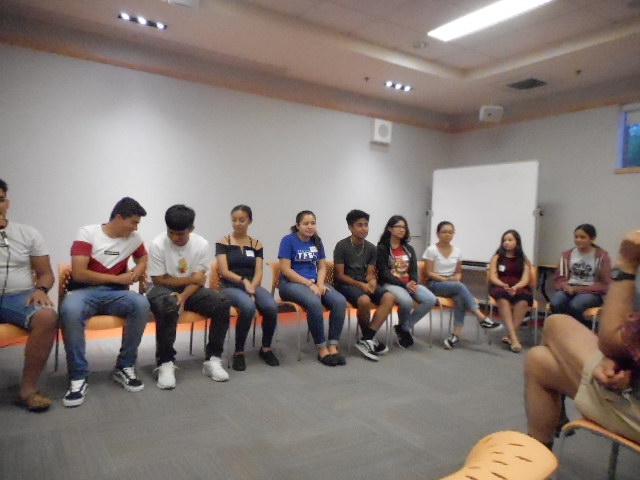 American born children of El Salvadoran descent whose parents have Temporary Protective Status and feat being deported spoke at the Watertown Free Public Library on Aug. 8, 2019.

At the Watertown Free Public Library last week, over 60 people came to hear Boston-area children share their deep fears of being ripped from their parents.

Lynn resident Jose Palma, who coordinates the National TPS Alliance, explained the meaning and history of Temporary Protected Status, and the immediate threat of deportation faced by 450,000 people across the US. As founder of the Mass. TPS Committee, and himself a TPS holder from El Salvador, he knows first-hand the anxiety he and his family face every day, should the Trump administration succeed in their plans to imminently eliminate TPS visas.

Many TPS holders have been living and working in the United States for as long as 20 years, as business owners, home owners, tax payers, and parents of U.S.-born children. They are an integral part of American society and a large contributor to its economy. Every 18 months, each recipient must pay for and complete a new application for their TPS status renewal, which includes fingerprinting and a thorough background check.

As Mr. Palma related, “Attacks on TPS recipients hurt not only immigrants and their families, but all of us who benefit from their dedication and involvement in our communities.”

After welcoming attendees, Watertown Citizens president Sue-Ellen Hershman-Tcherepnin asked for a moment of silence in memory of the previous weekend’s racist-fueled mass shootings in El Paso and Dayton. She remarked, “Immigrants from all over the world are under attack, but these brutal attacks that are so vivid in our memory right now were clearly targeting the Latino community.”

The audience then watched a short documentary film, The Last Dream, about a play created by children of TPS parents from El Salvador, under the guidance of Boston Experimental Theatre Company (BETC). The children have performed the play at City Hall, area religious institutions, and six months ago, in D.C. for members of Congress.

Many attendees were moved to tears by the film about their making of the play, as well as by the courage and tears of these children as they spoke about their constant fear of separation. BETC members Vahdat Yeganeh, Jared Wright and Emily Wright expertly moderated subsequent discussion with the children. Audience questions included how their parents show them support, and their personal dreams for the future. The support ranged from driving lessons and soccer coaching to encouragement to study hard and follow their dreams.

Dreams for the future included cardiac surgeon, immigration lawyer, business manager, soccer pro, and at least one student who said she isn’t sure what she would like to be. Her dreams changes, as she related, “ I first thought I wanted to become a therapist, then later I thought I wanted to be a veterinarian; but now I think I’d like to be a congresswoman.”

All of the children expressed fear that they wouldn’t be able to follow their dreams if they were separated from their parents. The choices are appalling: being left here without their parents, or being transplanted to El Salvador, a country which they have never visited and which is extremely dangerous. Several children expressed difficulty focusing in school and unable to contemplate future dreams, since that seems futile without emotional and financial support of their parents. One high-schooler stated, “If my parents get deported, I I would have to drop out of school to become a mother to my younger siblings.”

Another mentioned the difficulty her older sibling recently faced in securing a continued college loan due to lack of permanent residency of her parents. She had to transfer colleges because her financial support was greatly reduced when newly confronted with the issue of her parents co-signing a loan without being permanent residents. Pressure on TPS families from the federal government apparently continues to mount in unexpected ways.

At the conclusion of the evening, mention was made of two important upcoming dates: First, a crucial Aug. 14 federal hearing in Pasadena, at which the circuit court will decide whether or not to allow the federal government to eliminate TPS visas. The MA TPS Committee plans to send 30 TPS holders to the hearing, and locally, people are encouraged to host a gathering to watch the 40 minute hearing, which takes place at noon EST (9 a.m. in Pasadena). It will be streamed via Facebook. Second, on August 25, the MA TPS Committee will celebrate the 2nd Anniversary of its founding.

People who wish to donate to their efforts and/or buy tickets to the anniversary celebration can find information at www.masstps.com

Find out whether or not the 9th Circuit Court will uphold a prior court decision to extend Temporary Protective Status (TPS) to people from El Salvador, Haiti, Nicaragua & Sudan or if the court will allow the Trump Administration to deport these people to their home countries on January 2, 2020.

Please arrive at 11:45am as the hearing will start at noon. Since the hearing starts during lunch time, please purchase lunch if you would like to do so. The hotel has parking lot next to the restaurant for a fee.

The Social Restaurant & Bar is accessible by MBTA from the Watertown Square Bus Yard. Take any bus leaving the bus yard