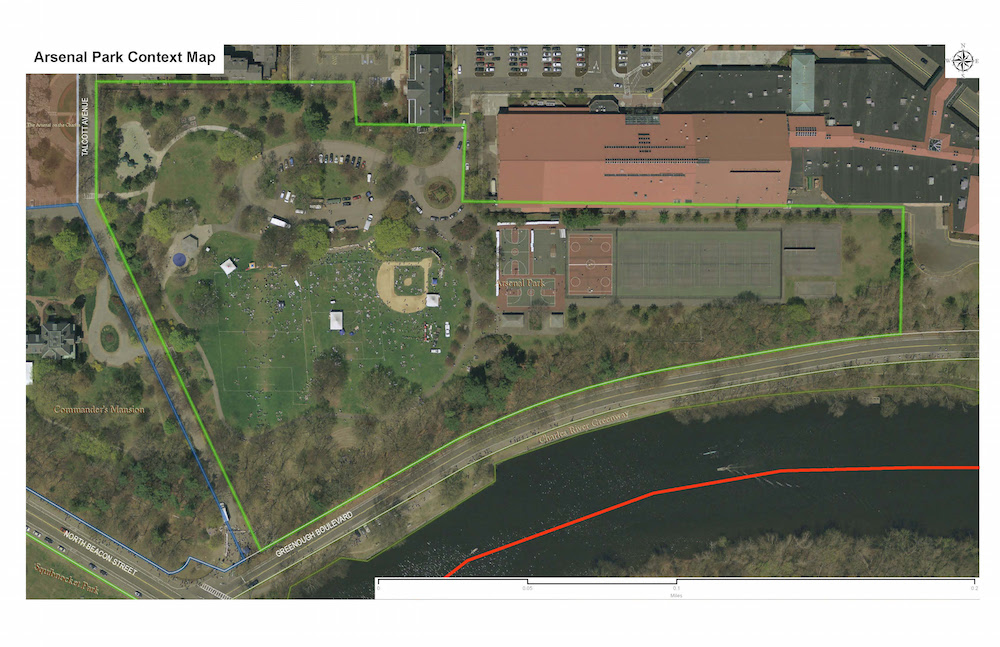 An overhead view of Arsenal Park. The long red building is the Arsenal Mall, and to the left is the Commander's Mansion and the Arsenal on the Charles complex.

A public-private partnership between the Town of Watertown and the developers of Arsenal Yards, which was to speed up renovation of part of Arsenal Park, has ended, Town Manager Michael Driscoll announced Tuesday night.

A disagreement over a construction management fee that Boylston wanted to charge the Town to oversee the construction was the main sticking point, according to Driscoll, who read from a letter from the Town’s attorney Mark Reich of KP Law.

“Of particular concern, and the primary impetus for this letter, is the insistence of Mr. (William) McQuillan that the Town pay Boylston Properties a 5 percent construction management fee as part of the proposed public-private partnership,” the letter reads.

The idea for the partnership came from Boylston, according to the letter, as a way to accellerate the redevelopment of the park near the Arsenal Yards project.

“The Town administration entertained this request as it presented an opportunity to advance a portion of the Arsenal Park project at a cost savings to the Town and on a faster pace, with the Town retaining control over the design and implementation of the park improvements,” the letter reads. “Never did the Town consider that there would be an added cost to its partnership with Boylston Properties.”

The fees would be in realm of “tens of thousands of dollars” according to the letter.

In April, the Town Council approved the agreement which would have resulted in the area of the park closest to the redevelopment of the Arsenal Mall using the construction contractors being employed by Boylston Properties to do the work.

The partnership then needed to be approved by the State Legislature and signed by the governor because the agreement would otherwise be in violation of the state’s procurement rules.

“While such acceleration would benefit the Town, it has a clear benefit for Boylston Properties, as completion of that portion of the Arsenal Park improvements adjacent to Arsenal Yards would improve the marketability of the Boylston Properties site,” the letter reads.

When the Town Council approved the agreement, the letter said, the fee was not part of the it.

“No mention was made of any fee to be paid to Boylston Properties, as no such fee was anticipated by the Town administration,” the letter reads. “The unanimous approval of the resolution did not address any such fee, nor were any provision made for the funding of the fee. The fee was simply not part of the matter for consideration by the Town Council or Town administration.”

The first mention of a fee came in a draft memorandum of understanding (MOU) sent by Boylston to the Town on March 8, 2019. The Town’s attorneys deleted the section on the fee in the MOU and that version was provided to Watertown’s delegation at the State House as well as the state Office of the Inspector General, according to the letter.

“It was clear from this meeting that the MOU must be favorable to the Town and its taxpayers, and cannot provide a windfall to the developer,” the letter reads.

In July, McQuillan reached out to Town Council President Mark Sideris, the Town Manger and State Sen. Will Brownsberger to discuss the construction management fee.

“The Town received the first letter on this topic from Mr. McQuillan on July 19, 2019,” the letter said. “That letter indicated that the lack of such a fee ‘represents a deal-breaker’ and that Boylston Properties ‘don’t do our work for free, no more than the Town issues Building Permits for free.'”

Boylston Properties sent a second letter in August indicating that a lack of the fee would prevent Boylston from executing the MOU.

The addition of a fee after the approval of the MOU would be in violation of the state procurement rules, Reich said in the letter. This would require the procurement process to go ahead, which would mean there would negate any time savings provided by the partnership.

The Town Council did not respond to the letter, which was read toward the end of the meeting under the Communications from the Town Manager. An email seeking comment from Boylston Properties was not responded to before the publication of the article.

Driscoll added, however, that work on the entire Arsenal Park renovation is proceeding, and the section closest to Arsenal Park would be part of that. In July, the Town Council approved $250,000 for final designs of the Arsenal Park project.

7 thoughts on “Partnership Between Town, Arsenal Yards to Renovate Town Park Over Before it Began”