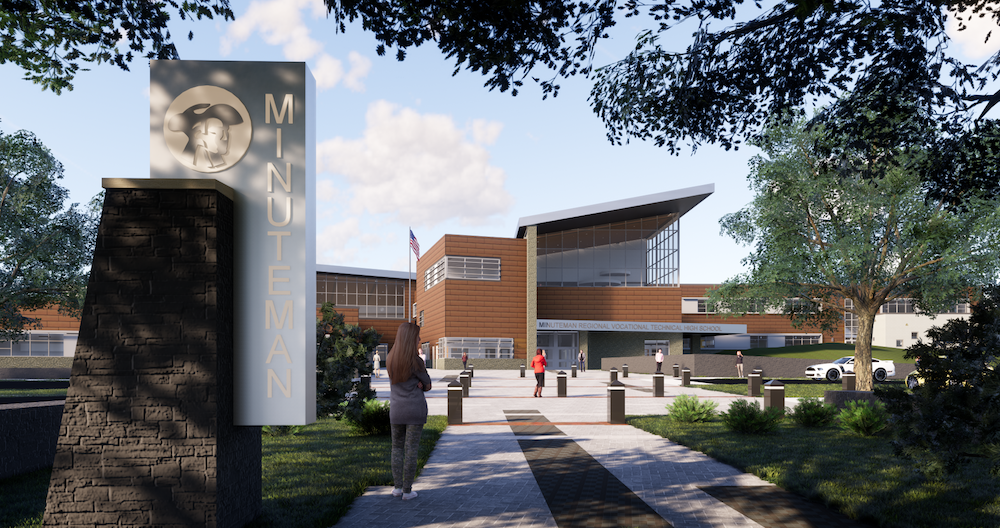 An illustration of what the new Minuteman High School building will look like when it is completed. The Lexington-based vocational technical school is attended by dozens of Watertown students.

An inviting Student Union, a theater outfitted with an impressive array of professional-grade features, and a spacious restaurant with a café, a bakery sales area and a patio that seats two dozen guests are some of the marquee elements in a new school building in Lexington. Although it probably sounds more like a college facility, it’s actually the new, state-of-the-art, visually striking $145 million Minuteman High School, which opened its doors to students for the first time on September 3.

So far, according to two top Minuteman administrators, the transition from the old building to the new one has been an invigorating experience that is going extremely smoothly.

“The staff are very excited,” said Minuteman Superintendent-Director Dr. Edward A. Bouquillon, who was the primary driving force behind getting the new building approved and constructed. “There’s a little anxiety about coming into a new place. It’s been a transition, but a pretty exciting one. My leadership team and the teachers have been patient and accommodating.”

They are now wearing ID badges and are successfully navigating the 257,000-square-foot building, he added.

Every effort has been made to help people find their way around without difficulty and to feel at ease. For example, eleventh- and twelfth-grade student ambassadors came in a week prior to the opening of school to familiarize themselves with the building’s layout so they could show it to others, and there are big posters with color-coded maps of the building displayed in prominent locations. More time has also been initially allocated for students to travel from one class to the next in case they require a few extra minutes.

Both Dr. Bouquillon and Principal Clement praised the building’s abundance of space available for collaboration between students and between staff members. “People are together more here,” explained Dr. Bouquillon. “It’s deeply satisfying to see the design do what it was intended to do. The architects listened to the kids and teachers. The design reflects everyone’s best ideas.”

He continued, “The building reinforces Minuteman’s strength. We deal with the whole student in a very personal way. Our commitment to integration of rigorous academics and relevant technical curriculum is greatly enhanced in the new building. Academic teachers are integrated throughout the building.”

Principal Clement noted appealing décor features such as the subdued color palette of earth tones like browns, tans and grays accented with pops of intense hues, along with the presence of natural light that conveys an airy feel.

Dr. Bouquillon mentioned favorite spots including the library, the Student Union (“People feel comfortable hanging out there”), and the theater, which boasts “the most sophisticated technology in the school except for what is in the Advanced Manufacturing program, now in its third year.

Both Dr. Bouquillon and Principal Clement said that the new building elevates what Minuteman already does for students. The high-caliber of education provided there earned the school a prestigious National Blue Ribbon School Award last year from the U.S. Department of Education.

He also expressed his deep gratitude to the residents in Minuteman’s district towns who voted overwhelmingly to approve finding for the building in September 2016, to his “exceptional” leadership team, and to the students who unstintingly spent their time and energy giving valuable feedback about the design as it evolved, even though many of them would be graduating before the building was even finished. Calling their dedication “selfless,” Dr. Bouquillon said, “It’s something I’ll remember for the rest of my life.”

“This building aids the whole process,” summarized Principal Clement. “It’s what we want our climate and culture to be. We have competent, caring teachers and career and technical programs that are second to none. When we demolish the old Minuteman building to make room for the athletic fields, we will have the total package. This will be a destination for people in the community to want to come to. We’ll be unstoppable.”

As an accredited member of the New England Association of Schools & Colleges (NEASC), Minuteman inspires all students to attain their full potential, accelerate their learning, and become purposeful citizens in the global community.