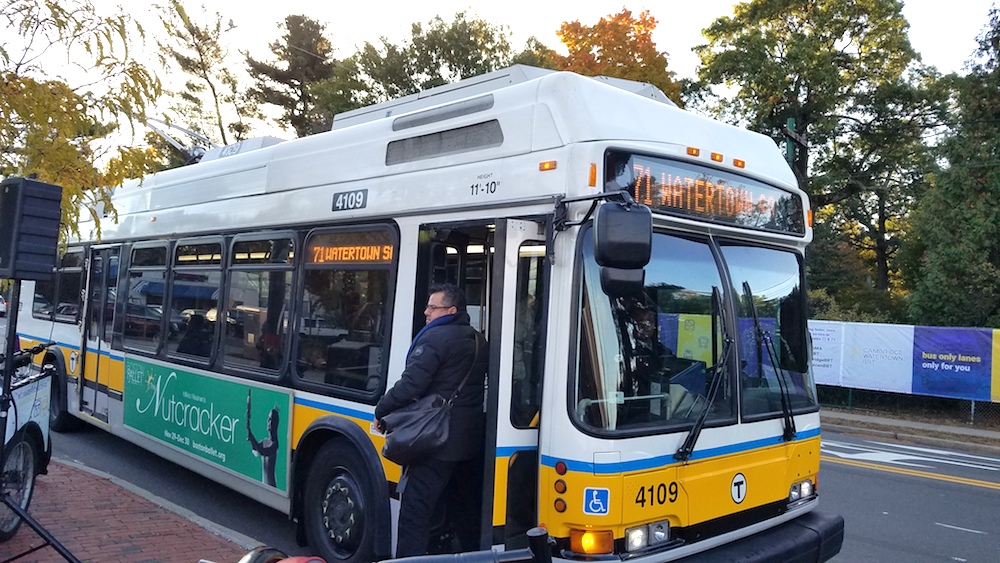 Buses like this one on the 71 bus will get priority heading toward Harvard Square on Mt. Auburn Street in the new Cambridge-Watertown Bus Priority Pilot program.

The MBTA’s Board heard a presentation last week from leaders of Toronto’s regional rail system. What was really stunning was how rapidly Toronto has been investing in all forms of transit improvement and expansion.

Since 2008, Toronto’s regional leadership has been engaged in a series of transit expansions which will add up to a total investment of approximately $60 billion by 2028. Annual spending has reached a level over $4 billion in some years. Four billion dollars in well-managed transit investments within one year represents staggering progress. In Massachusetts, we have struggled to raise our annual investment to $1 billion per year on transit. In private and public meetings officials ask constantly whether we can move more quickly, but again and again the answer has been that we don’t have the planning and management capacity to do so.

Toronto’s accomplishments should give us hope that we can build much greater planning and management capacity. The key to Toronto’s rapid movement has been to recruit talent from around the world through public-private-partnerships.

In Massachusetts, we use a traditional procurement approach: Public agencies, heavily aided by consulting resources, write detailed engineering specifications for projects. Then they put the specifications out to bid.  Construction or manufacturing contractors place their bids. The selected contractor is paid incrementally from public funds as they hit milestones in the contract work. Then the public agency runs the built road or transit facility.

In the Toronto public-private-partnership (“PPP”) model, the public agency works with stakeholders to define key service goals at a high level: For example, provide 15 minute service in both directions on a certain route.  Then, it requests proposals from teams of companies. Each team must demonstrate that it includes all the necessary capacities necessary to provide the service — design, engineering, construction, manufacturing, management and even construction financing. The public agency chooses the team that offers the best overall package.

The PPP may include major financial entities that front the money for the project, but ultimately all the funding for the projects comes from the fare payers and the government. The partnership contract may shift some of the project risk to the private partners, for example, the risks of cost overruns or the risks that demand for the new service does not materialize. This improves accountability and reduces the probability of failure.

Perhaps the most important feature of the Toronto PPP model is that it draws in the talent of multiple private companies from across the world to do design, engineering, and management. In our traditional model, our ability to expand transit is limited by the available time and skills of a fairly small number of public employees. I have written previously that we need to build more depth in our transportation leadership. The PPP model still requires a lot of skilled oversight, but it engages a much larger talent pool.

The Governor’s current transportation proposal does include language designed to facilitate public private partnerships along these lines. I hope that we can develop consensus and pass language that moves in this direction.

If we are able to build more project capacity through PPPs or otherwise, we will still be limited by available funds. The gross product of Ontario, the province including Toronto, is not much greater than that of Massachusetts but the role of national support may or may not be comparable.

Commuter rail riders in both Boston and Toronto tend to be more affluent.  In Toronto, the discussion seems to be about raising fares to achieve self-sufficiency. In Boston, our commuter rail runs through many lower-income communities. There is increasing recognition that many lower-income people might use commuter rail if the fares were lower.  More on this possibility in a future post.

One thought on “OP-ED: Raising Our Rate of Investment in Transportation”