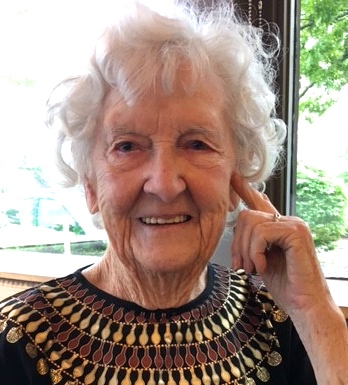 Bernie was born in Swampscott, Mass, and moved to Watertown in the eighth grade, where she attended St. Patrick’s Grammar School and High School. After graduating in 1942, she studied nursing at the Cambridge Hospital (now Mount Auburn Hospital), graduating and joining the Nurse Cadet Corps, which posted her to Camp Edwards on Cape Cod during the last months of the Second World War. Following discharge, Bernie and several nursing friends found jobs at a hospital in Miami, managing to use their free train travel with the military to arrive in Florida before the end of 1945.

The five nurses found an apartment opposite a fire station in Miami; according to Bernie, they “had a lot of fun,” including a trip to Havana. Following her return to Massachusetts, she worked as a hospital nurse in Jamaica Plain. She met her future husband through the Sodality group at St. Patrick’s (where she learned, in a church play, that he could not sing). They married on June 24, 1950 at St. Patrick’s, with a reception in Harvard Square; they heard about the outbreak of the Korean War while driving to their honeymoon in Niagara Falls.

Their first rented apartment was on Pleasant Street in Watertown, but they had already bought a summer cottage in Brant Rock, Marshfield before their wedding (for $3,500, including an extra lot of land). John’s parents gave them the land next door on Highland Ave in Watertown, where they built the family home – a picture-perfect post-war Cape Cod house, ultimately with its own nuclear fallout shelter. Bernie then raised five children there in rapid succession, with a sixth arriving nine years later. When the first five were young, she and John diligently lined them up, by height, for a family photo most Sundays; occasionally she ensured their safety by tying them to a rope line in the back yard.

Bernie was always active in the community, and as the children grew older she took on an increasing number of roles. She worked on the founding of the Watertown Boys’ Club and served on its board, becoming its first woman president (and overseeing its change of name to the Boys’ and Girls’ Club). She led the rescue of the Club after a serious financial crisis, for which she received the Woman of the Year Award from the Watertown Chamber of Commerce in 1981.

Bernie was an avid reader and painter, joining the library, history and arts guilds in Watertown and later in Bonita Springs, Fla., where she spent the winters from 1988 to 2010, and Marshfield, where she settled full-time. Upon receiving half a dozen large hard-cover history and biography books for Christmas a few years ago, she told a couple of her grandchildren that she hoped to live long enough to read them (she did).

She was active with Mount Auburn Hospital throughout her life, serving for many years on the advisory board and then volunteering in the gift shop. She continued to serve the nursing profession, volunteering as a nurse at Boston College High School and for Red Cross blood banks for many years, and serving on the board of the Visiting Nurses Association of Belmont and Watertown.

Aside from her family, Bernie’s greatest loves were travel, the beach, and history. She and John first went to Ireland in 1965 – when there was only one flight a day, and they would fly separately on consecutive days to be sure that, if anything happened, the children would not be orphaned. (She was always practical.) They went to Ireland every other year, visiting another destination in Europe or elsewhere in the alternate years – including Australia and New Zealand in 1982 and South America – where Bernie’s altitude sickness prevented her from fulfilling her dream of visiting Machu Pichu (while John, unaffected, went and returned, largely unimpressed). After John’s death in 1999, Bernie quickly resumed her travels, visiting Hawaii, renting a thatched cottage in Galway with several of the kids, taking a cruise in the Baltics with Tobie’s mother Bess, and visiting Tim in London several times. She continued to spend the winters in Bonita Springs, near all three of her sisters. She renewed her passport in her mid-80’s, “just in case”. When she was no longer able to travel, she continued to read about the world – travelogues, history and biography especially – and was a big fan of Rick Steves.

Bernie was endlessly curious and found something to enjoy in everything – she (almost) never had a bad thing to say about anything or anyone. But we all knew what she meant when she said that a new food was “interesting”, or, God forbid, a new experience was “different”….

Bernie moved to Proprietor’s Green in 2010, living for many years in independent living before moving to assisted living and then memory care. Although her poor hearing limited her social activities far more than she would have liked, she kept making new friends, almost (though not quite always) showering joy, good spirits and endless gratitude on staff and visitors alike. She remained full of life, curiosity and joy to the end.

A celebration of Bernie’s life will be held at a later date, with arrangements to be made through MacDonald Rockwell Funeral Home, 270 Main St, Watertown, MA 02472. Memorial contributions in Bernie’s name may be made to the Watertown Boys’ and Girls’ Club, 25 Whites Avenue, Watertown MA 02472.