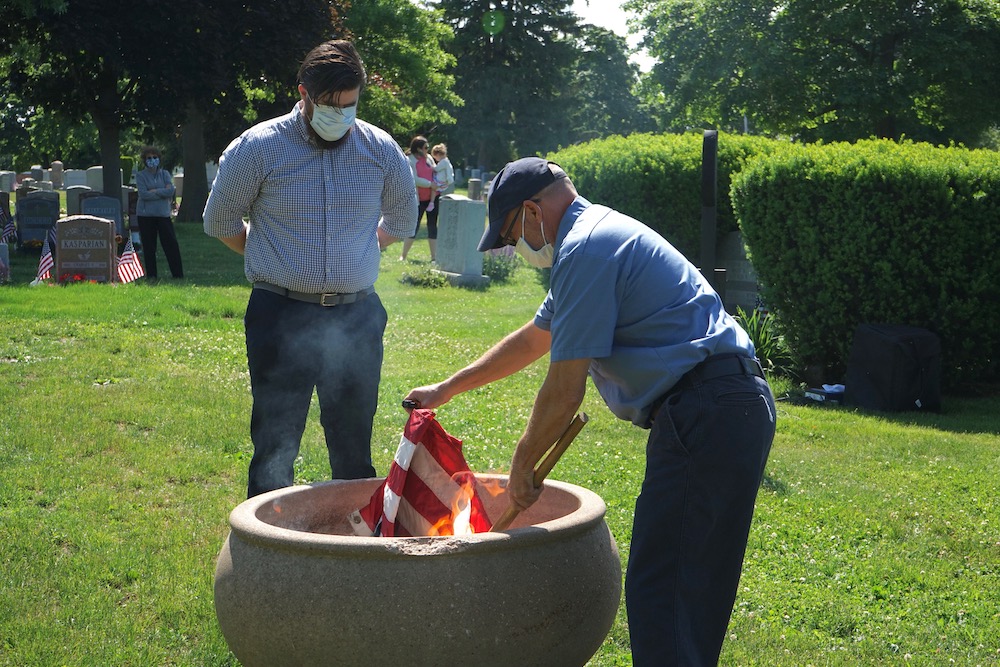 Veterans Agent Patrick George watches as a member of the Department of Public Works lights the retired American Flags during the Flag Day Ceremony at Ridgelawn Cemetery.

Watertown’s veterans groups got together at Ridgelawn Cemetery for the first ceremony since the start of the COVID-19 shutdown Sunday to honor the American Flag and retire some during the annual Flag Day Ceremony.

With the cancellation of the Memorial Day Parade, the town’s biggest event involving veterans, the Flag Day Ceremony took on a bit more significance this year. Veterans Services Officer Patrick George read a statement that he normally does during the Memorial Day activities in late-May.

“Typically what we do on Memorial Day is rededicate memorials around Watertown,” George said. “Watertown has over 41 memorials dedicated to either specific services members, specific war eras or prisoners of war.”

The flag is the emblem of the United States, and it takes on special significance to many veterans, George said.

“With Flag Day now, it’s and additional significance,” George said. “We sort of understand another reason why that there are people who are willing to give their lives for their country.”

At the ceremony, flags were collected and put in a large cement urn. A member of the Department of Public Works (with Watertown Firefighters there just in case) lit the flags with a torch covered in lighter fluid.

Three veterans fired a salute three times during the ceremony, with the Watertown Police Honor Guard flying the colors.

“The flag, when in such a condition that it is no longer a fiting emblem for display, sshoul be destroyted in a dignified way, prefereably by burning,” George said. “Keeping with the law of the land we present to you they sympyl of our natinoa which has seved a useful life as a symhbol of freedom and our country, for retirment.

Veteran Jack Gately gave a reading about why the flag is folded 13 times. He noted that while some may think it is because of the original 13 colonies, but he said that each fold has a significance and honors things like life, veterans, the armed forces, mothers, fathers and the Judeo-Christian faiths.

One of the dozen, or so, veterans on hand for the ceremony was Watertown’s Tim Eaton, who is Third Vice Commander for the Amvets in Massachusetts. He was joined by Arthur Marchetta, First Vice Commander of Amvets of Massachusetts. Years ago, Watertown held Flag Day ceremonies, but the tradition died out. It was brought back in 2017 by then-Veterans Agent Mark Comeiro.

Eaton joined the Amvets because he was a member of the Watertown Eagles, and some of the members were looking for more people to march with the Amvets a parade. Now he is trying to get more people from Watertown to take part in ceremonies such as the one on Sunday.

“The older crew used to do it, I’d like the rest of the younger crew to get more involved in it,” Eaton said.

George said that Flag Day was a chance to start to get back to normal with veterans events.

“It’s nice out. We have enough space so we can spread out,” George said. “I thought it was important to have something, once things are beginning to start to open — I think it’s import to do something.”

The Veterans Services Office remains open during COVID-19 and Patrick has still been filing claims for veterans. He has spent more time than usual teaching people how to send pictures on their phone or even merging documents or how to print to PDF.

He also got calls from people asking what they could do with their old flags.

“I got so many phone calls from people who had flags they wanted to drop off, because I think they were doing some spring cleaning and they found the flag they wanted to donate,” George said.

There are places to donate flags in normal times, including the Marine Corps League’s Shutt Detachment, the Watertown Recycling Center and Ridgelawn Cemetery.