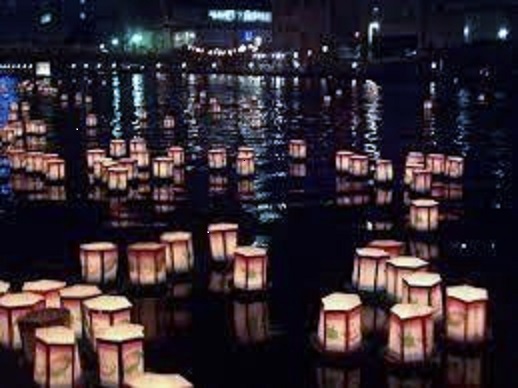 Candleboats float on the Charles River in Watertown in memory of those who died in the nuclear bombings in Hiroshima and Nagasaki.

The following piece was submitted by Jeanne Trubek, Sue-Ellen Hershman-Tcherepnin, Pam Phillips and Sue LaDue of Watertown Citizens for Peace, Justice and the Environment:

Seventy-five years ago, the United States opened a new era, the Age of Nuclear Weapons. In August, 1945, the US dropped one atomic bomb on Hiroshima and one atomic bomb on Nagasaki. Those two bombs killed 226,000 people — immediately. In the years that followed, the survivors — in Japanese as “Hibakusha” – suffered cancer and chronic disease as a result of the extreme radiation. Suddenly the world was faced with a weapon so incredibly destructive that the world could only hope it would never again be used.

Many of us remember a childhood of crouching under our desks for elementary school air-raid drills, running frightened home when an airplane flew overhead, hearing adults discuss whether or not to build a bomb shelter, fearing during the Cuban Missile Crisis that this was really the end of civilization.

In 1968 our country agreed that atomic bombs should never again be used. The United States signed the Treaty on the Nonproliferation of Nuclear Weapons, along with the four other countries that then had nuclear weapons. In Article VI of that treaty, the five countries agreed that “each of the Parties to the Treaty undertakes to pursue negotiations in good faith on effective measures relating to cessation of the nuclear arms race at an early date and to nuclear disarmament, and on a treaty on general and complete disarmament under strict and effective international control.”

How much progress have we made in this commitment? Now nine countries are known to have nuclear weapons. The United States currently has 6,185 nuclear warheads, including about 150 warheads in several NATO countries. The nuclear weapons arsenal is being modernized at a cost
over the next 30 years of at least $2.7 trillion! The military budget, apart from this modernization, is $740 billion, compared to $87 billion for Health and Human Services, $64 billion for Education, and $48 billion for Housing and Urban Development.

The incredible emphasis on militarization spreads into the social structure of our country. We see police forces with armored vehicles, grenade launchers, bayonets, machine guns, night-vision goggles and military aircraft. And with the advent of cell phones and laws requiring police wear video cameras, we have become more starkly aware that police all over the country have been attacking the citizenry and murdering unarmed Black men and women, as well Hispanics, Native Americans and other
people of color.

COVID-19 has illustrated clearly the huge holes in our economy and in our society — much more is needed for education, health care, housing, environmental protection, transportation and other human services. Yet most of the money is spent on weapons so horrific that we have to hope they are never used.

Having this nuclear arsenal does not make us more secure. On the contrary, it puts us all at great risk. Each crisis that is met with bluster, rather than diplomacy, puts us at risk of a world conflagration that none of us would survive. It is time to honor that treaty we signed 52 years ago and time to begin the dismantling of the nuclear weapons arsenals around the world.

Please support the Hibakusha – the atomic bomb survivors – in their appeal to all Governments to conclude a treaty to ban and eliminate nuclear weapons.

And please join Watertown Citizens for Peace, Justice and the Environment in Watertown Square on Sunday evening, Aug. 9, 7:30 to 9:00, for our annual silent vigil, testimonials and floating of candleboats in commemoration of the bombings. Visit www.watertowncitizens.org for more information.

For more information on how this military spending affects us, attend the Massachusetts Peace Action webinar “Fund Healthcare, not Nuclear Warfare” on July 26.
http://masspeaceaction.org/event/fund-healthcare-not-nuclear-warfare/