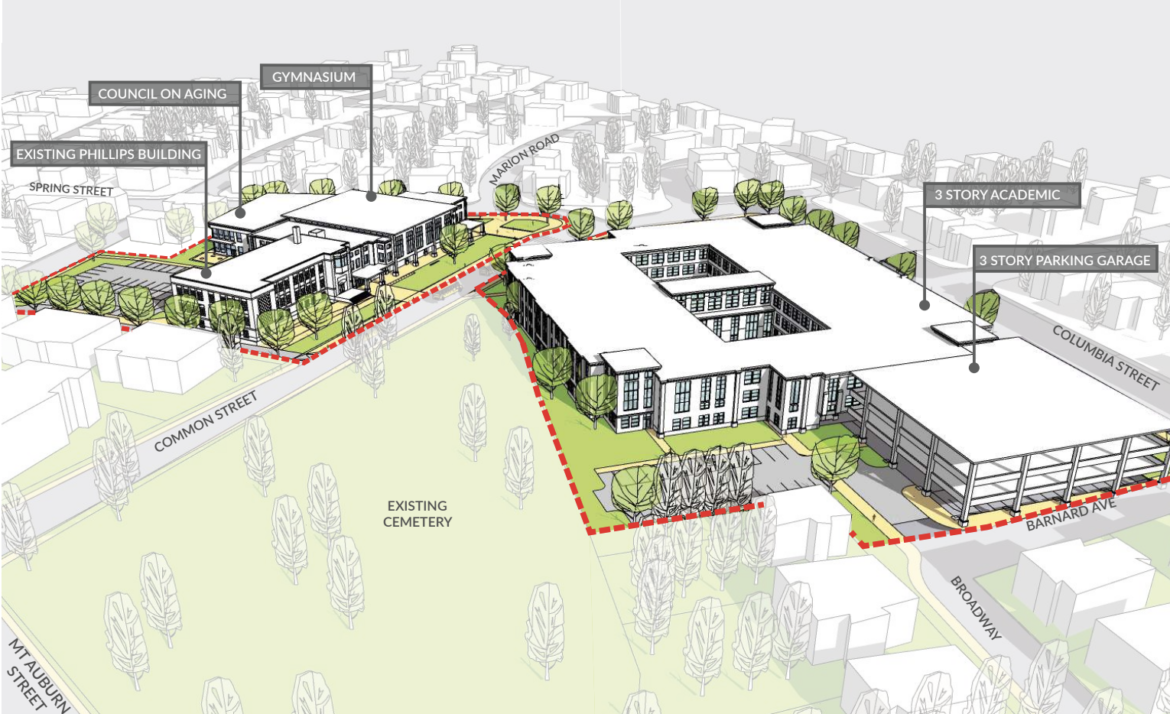 A mockup of what Watertown High School could look like if the current school was renovated and expanded. A new gym would be built on the Phillips School site, and a parking garage would go on the corner near Barnard Avenue (bottom right).

An option of renovating and expanding the existing Watertown High School got bad reactions from the School Building Committee Wednesday night. The committee also saw more details of building a new school on part of the Victory Field complex.

The planning for rebuilding or renovating the high school will be discussed further during a virtual Community Forum to be held on Wednesday, July 29 at 6 p.m. During the forum, the public will have a chance to voice its opinions on the options.

The School Building Committee has narrowed the options, but still is considering five. Some include tearing down the existing building and constructing a new school on the existing site and the Phillip School site. Others would put the new building on the Victory Field property. The committee is also looking at what it would take to renovate the current school and redeveloping the Phillips School site to include a gym and other facilities.

The option to renovate and expand the current school was designed to show how the historic part of the original high school, built in 1925, said designer Scott Dunlap of Ai3 Architects. The Massachusetts School Building Authority (MSBA) also requires communities consider renovating the existing school along with options for a new facility. By working with the state, Watertown can qualify for reimbursement of close to half the cost of the project, which appears to be around $200 million.

Under the renovation scenario, called option 2B, the school would be renovated and the non-historic portions will be torn down and replaced. Dunlap presented a possible schedule that would include five phases over more than 5.5 years (proposed from June 2023 to June 2029).

The first step would be building a new gym and physical education facility on the Phillips School site. Also, new School Administration offices and a new Senior Center would be constructed in that area, Dunlap said, but the historic portion of the Phillips School (dating to 1936) would be preserved.

A new academic wing would be built on the site of the current gym. Then the parts of the school dating back to the 1930s would be torn down and replaced with another academic wing.

The historic portion of the high school would be renovated in two phases. In the first phase, a multi-level parking garage would be built near the corner of Columbia Street and Barnard Avenue. The green space would be addressed in the final phase.

“So, that would be 6 years of construction with the students right in the middle of it. I think that’s a recipe for disaster,” Anastasi said.

According to Ai3’s presentation, building a new school on the current site (options 3D and 3E) would take an estimated 4 years and end in June 2027, while building a school on the Victory Field site (options 4D and 4E) is forecast to take 2 years with an end of school construction in June 2025. Building the new athletic fields in those scenarios would take another 10 months, ending in April 2026.

A number of others agreed they do not like this option. Committee member Kelly Kurlbaum said the garage bothers her.

“You can dress up a parking garage as much as you want, but at the end of the day it is a parking garage,” Kurlbaum said. “That’s going to be highly visible, especially with the neighbors. I have a hard time seeing it flying with neighbors.”

In prior meetings, architects showed ways to build the new high school on the current site, while incorporating the Phillips Schools site. Scenarios where the new school would be built on part of the Victory Field site were discussed, but not in as much detail. On Wednesday, Dunlap went more into depth about the Victory Field options.

One option, known as 4D, would put the building on the land where the track and tennis/basketball courts are located. The school would front onto Orchard Street. A four story building, with a driveway and parking around it, would take up much of the space, Dunlap said.

This scenario would require the stadium area of the complex to be rebuilt to accommodate a track around the football field. A new baseball field, which could also be used for soccer, would be built on the current WHS site after the school was demolished. Dunlap said it will be a bit of a squeeze to put the baseball field on the current site, but it can be done.

“This is not an ideal orientation and it is going to have short left field with a really high Monster (outfield wall),” Dunlap said.

The other Victory Field scenario, option 4E, would construct the school on the football/baseball stadium area. The parcel where the school would be built is about 1.75 acres smaller than in 4D, Dunlap said, making it a tighter fit.

“The limited amount of frontage on Orchard forces on-site circulation to go around the building to get in and out from an emergency, fire safety stand point,” Dunlap said.

School Committee member Lindsay Mosca, who is on the Building Committee, did not favor the option.

Dunlap also presented the cost of building the high school in the various options during Wednesday’s meeting.

The difference between options 3D and 3E is that 3E has a pedestrian bridge across Common Street connecting the school buildings.

Dunlap noted that the price would be about comparable for 3D and 4D, but the extra money would go for different aspects of the project.

“If you consider it an advantage, the Town would be addressing several other needs as part of the 3D option, where as in 4D that premium is being spent to rebuild fields that get displaced,” Dunlap said.

“A lot of work has to be done after a preferred option is selected,” Murphy said.

The goal is to have Watertown residents vote on the town’s portion of the funding in the fall of 2021, said Tim Bonfatti of Compass.

See more about the project at the Building for the Future website, and see Wednesday’s slide presentation by clicking here.