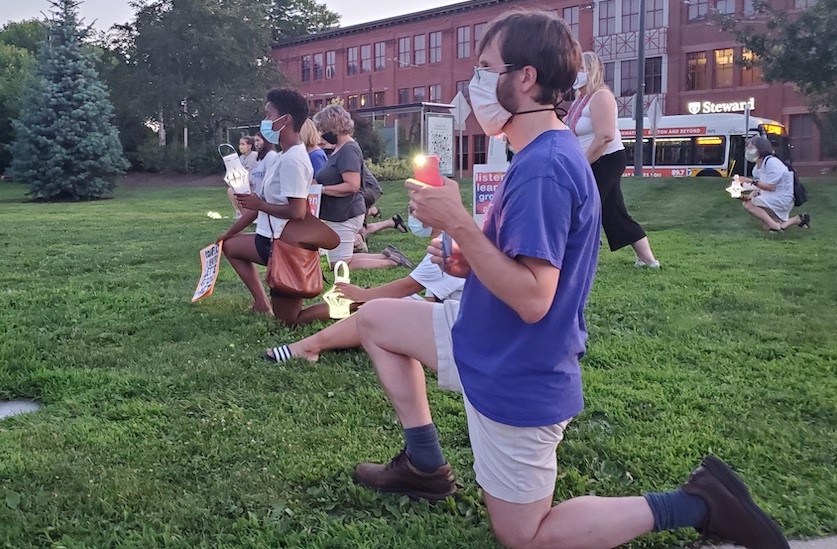 People kneel in memory of George Floyd and others during a candlelight vigil in Watertown Square co-sponsored by the Kingian Response Team and the Watertown Police Department.

Tuesday night, dozens of people gathered in Watertown Square holding lanterns and candles in a vigil for George Floyd and others, and to speak out against racism and bigotry. The event was one of the first efforts of the Kingian Nonviolence Response Team, which grew out of a program that has its roots in the Watertown Public Schools.

The Kingian group has plans to work with the Watertown Police Department, the Watertown Public Schools and the Town Council to reduce what they see as systemic racism in these local institutions. And much of the effort is being led by current Watertown students who learned King’s teachings in the Kingian Nonviolence program at Watertown Middle School.

Tuesday’s vigil was co-sponsored by the Kingian Response Team and the Watertown Police Department. Several police officers, including Chief Michael Lawn, were in attendance.

“We want to spread the word about racial injustice here in Watertown,” Parkin said.

During Tuesday’s vigil, attendees held signs, and waved to motorists. As darkness fell, people put their phones in their lanterns and lit them up. The group then kneeled for 8 minutes 46 seconds in honor of George Floyd. Then they read names of people who had lost their lives in similar incidents. The names stretched back to Emmet Till in the 1960s, and also included more recent deaths such as Michael Brown and Breonna Taylor.

On the lanterns was printed the motto that the Kingian Response Team is trying to spread, said Claire Fabian, a rising WHS junior.

Fabian and her sister Catherine, also a junior, have been trained in Kingian Nonviolence. Catherine is working on a website for the Kingian Response team.

Roots of the Movement

The Kingian Response team is made up of alumni of the Kingian Nonviolence program started by WMS teacher Ruth Henry. She first brought the principles of MLK’s movement to the schools even before she was teacher there.

Henry grew up in Watertown, and then left for many years, spending a lot of time in Colombia, South America. When she move back, she was not planning to move back to Watertown with her multi-ethnic family because when Henry was growing up it as not nearly as diverse a community. After moving back, she found that while the community was more diverse, the attitudes of many had not caught up with the demographic change.

Henry recalled the summer that her family move back to Town seven years ago, her children did not speak much English but they had met other children who spoke Spanish. That fall, Henry and her family were at a PTO car wash fundraiser and she spoke in Spanish with her children.

“One of the fathers came over talk to us about volunteer work he had done in Latin America,” Henry said. “The wife got upset and said ‘why are you speaking Spanish? No one speaks Spanish in Watertown.’ I said, ‘What? We had already made friends on playground with kids who spoke Spanish.'”

She saw this as one example of how the Town was lagging behind. Henry said she thinks the disparity is particularly evident in positions of power.

In 2016, Henry helped organize a Kingian Nonviolence training through the Watertown Schools for adults and youths in Watertown. She recalls one of the most enthusiastic people was Watertown Police Lt. Dan Unsworth.

“He would pull up next to me in traffic and said, ‘Make sure (then Superintendent) Dr. Fitzgerald lets the police into the training,” Henry said.

The first training was funded by a grant from MOVA (Massachusetts Office of Victim Assistance), and it reached 24 students, 17 teachers and three police officers — including Unsworth.

That fall, the trainees became trainers when they ran a session for Watertown Public School staff as part of the opening day professional training.

Since then, there have been community trainings when the group has been able to get training, Henry said, and the program is now an elective at the Middle School and now students are bringing it to the High School, and middle schools students are teaching elementary school students about the Kingian Principles. However, no more police officers have been trained, and one — Tony Physic — recently retired.

After the killing of George Floyd by a Minneapolis Police officer on Memorial Day, Eva Henry (Ruth’s daughter) said she wanted to join in the protests in Boston, but due to the COVID-19 she did not go.

Henry, who will be a WHS senior, decided she wanted to make an impact.

“Seeing everything happening around the country, other places making changes and getting things done, I really wanted to do something in the place where I live,” Eva said.

Eva and her mother sent out a message to alumni of the Kingian trainings to see what interest there was in doing something in Watertown.

“We had about 90 people respond to that first call, a lot more than we were expecting,” Ruth said. “Eva and I worked hard to identify a multigenerational, multiracial group. We didn’t feel like it was ours to do alone.”

Jason DelPorto, assistant principal at the Middle School, took part in the Kingian training and has seen the program grow at WMS, and now this summer’s effort take off.

“I would say it is as organic as it can be,” DelPorto said.

Like many communities, police reform is on the minds of the Kingian Response team. Kyeanna Parkin, a former instructional assistant in the Watertown Schools, is working with the Watertown Police to create a pledge that would be taken by all officers.

“I have had a few meetings with Chief (Michael) Lawn. It is still too early to tell,” Parkin said.

In May, the Watertown Police Department released a statement condemning Floyd’s killing. The WPD has made efforts to build relationships with different groups in town, and all officers go through anti-bias and de-escalation training.

The group working on providing Kingian training to more police officers is headed by Shivani Sharma, a rising WHS junior, and Will Twombly, who for years has been a part of the World in Watertown, the group that puts on the Unity Breakfast every Martin Luther King Jr. Day.

“This training would focus on understanding the nature of conflict, de-escalating confrontational situations, and finding peaceful resolutions to difficult problems,” Twombly said.

She added that the Kingian trainers would volunteer, so it would not increase the Police Department’s budget while at the same time would not be at odds with people looking to cut police budgets.

The Kingian group also wants to work with the Watertown schools to make changes there. WHS Senior Caiden Kiana is working with Eva Henry on the youth aspect, in a group called URJ (Understanding Racial Justice). They have already had meetings with other students to talk about issue such as microaggressions, cultural appropriation and racism in the schools.

“We are focusing on creating a pledge within the schools to incorporate from the nonviolence group,” Caiden said. “And we are looking at the history books to make sure we are not missing important Black history, as well as, look at how the school does discipline and make sure they do it in an unbiased manner.”

Ruth Henry said one of the key parts of the Kingian Response Team’s effort is collecting the stories and experiences of minorities in Watertown. She said that many have made complaints but have been met with denial, or even blame or backlash for doing so. Other times they are heard, but nothing happens, Henry said.

“Often people of color walk into a space where there are white people making decisions for people of color,” Henry said. “I want to make sure that when they tell their story, they do not just sit there and have people clap for them.”

The Kingian Response Team involves not just two, but three generations of Henrys. Connie Henry (Ruth’s mother and Eva’s grandmother) remembers hearing about MLK’s assassination while she was a student at Boston University. Decades later she was one of the first community members to be trained in Kingian Nonviolence.

While racism was not a front burner conversation before, Connie said she believes George Floyd’s death brought an old problem into focus for many. She also said she does not see any quick fix.

“As a white woman and educator, I know it is not about one march or one conversation, but about sustained work,” Connie said. “Given that the framework of Kingian Nonviolence is based on envisioning our society as a beloved community and strategically and bravely working towards bending us towards justice, I wanted to be involved in it on a local level, with my neighbors, through conversations, reflections, and actions.”

She added, “Wouldn’t it also be wonderful if Watertown could serve as a model for Kingian, anti-racist work?”