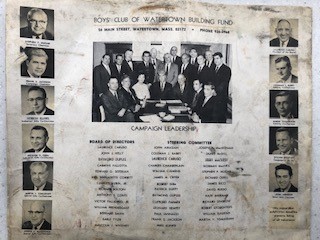 A photo of the Watertown Boys & Girls Club founders, including Bernadette Corbett, who pushed the national headquarters of the Boys Club to allow girls.

The following piece was provided by the Watertown Boys & Girls Club:

Forty years ago, the Board of Directors of the Watertown Boys Club made the landmark decision to welcome girls into the Club, making Watertown one of the nation’s first communities to offer membership to females.

In 1980, Clubs across the country were open only to boys, and the national organization of Boys’ Clubs was still 10 years away from renaming itself Boys & Girls Clubs of America. The Watertown Boys Club, which was founded eight years earlier in 1972, had a woman director who wasn’t about to wait to bring girls into the Club. Bernadette Corbett, one of the Club’s founders and the first woman Board president, was the force behind including female members.  At the Boys Club headquarters in Hartford CT, where the first Club was founded in 1860 by three women, she made the case with national leadership to include girls.

Recalls current member of the Club’s board Kelley MacDonald of Corbett who died earlier this year, “The girls in Watertown who have thrived and contributed so much to the Club over the past 40 years can look proudly to the leadership of Bernadette Corbett who argued so forcefully for them. Without her drive and inspiration, there’s no telling how long it might have taken to break the glass ceiling.”

In 2013, the Watertown Boys & Girls Club broke another barrier when the Board selected former member Renee Gaudette to become its first female executive director. During her tenure, the Club has expanded programming and grown its membership 45% to 1,400 members. In 2018 a new Teen Center was opened to serve more kids in the community. Today close to half of the members are female, perhaps even exceeding the founders’ expectations.

“It’s impossible to imagine our Club in those days, as it is the diversity of our membership that really makes WBGC Great,” said Gaudette. “As a Club kid myself, I know first-hand the positive impact that the Watertown Boys & Girls Club played in own life. Today, it is important for both boys and girls to see women in leadership roles, and I am inspired every day to be a positive role model for all our kids in Watertown.”

While the Club’s programs have evolved and increased in number over the years to the meet the growing demand, the girls’ programs stand out in many areas. The Girls Talk program enables girls to discuss a range of topics as they navigate the transition into young adulthood. Supported by a social work intern, the girls take on tough topics like bullying, body image, self-care and healthy relationships or dating safely/dating safety, with an eye on growing into strong, confident young women.

The girls have absorbed the lessons and demonstrated leadership along the way. In 2018 Destiny Santalucia became the first member from the Watertown Boys & Girls Club to win the prestigious Youth of the Year award for Massachusetts. In doing so, Destiny won a $25,000 college scholarship that allowed her to attend her dream college. Destiny said, “The Club welcomed me as young girl and allowed me to grow into a staff role during high school. My experience at the Club opened doors for me that I never thought possible.”

Says current Board vice-president Liz Padula, “We’re so grateful for the visionary leaders who helped bring girls into the Club. They made it more inclusive, and along with all the board members, we are working harder every day to live up to their bold standards. It’s more important than ever for girls to see opportunities in their future and the Club is a safe space for girls to grow and evolve into their full potential. We’re grateful to be able to help them face today’s challenges head on.”

The Watertown Boys & Girls Club was founded in 1972 and serves children and teens from the town and nearby communities by providing them a safe and fun place to grow and learn. With more than 1,400 members, the Club strives to help these kids achieve academic success, build character, and develop healthy habits. The Club is entirely funded by the generous donations of the community.