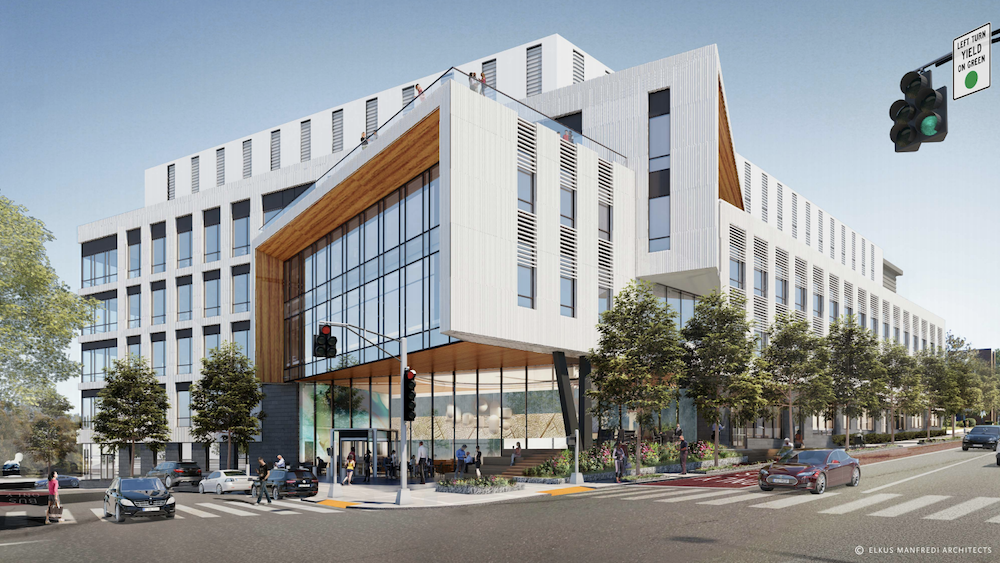 A view of the proposed life sciences building at 66 Galen Street viewed from Galen Street.

Plans for an a new life science building on Galen Street near Watertown Square got praise from the Planning Board for taking steps to address traffic in the area, improving public transportation and creating green space for public use.

The board voted unanimously on Jan. 13 to support Boston Development Group’s project at 66 Galen St., which includes the former Colonial GMC dealership and sits next to the MBTA’s Watertown Yard. On Jan. 27, the project will go to the Zoning Board of Appeals, which decides on final approval of the project.

The project has been discussed since last February when the developers came to the Town Council to change the zoning for some smaller parcels on Galen Street that were incorporated into the project. The zoning change was approved and made the zoning for the whole project to be zoned Industrial 2, which allowed for a five story building, instead of the maximum of four in the Limited Business zone.

The five story building would have 199,540 sq. ft. of gross floor area, and 277 below-grade parking spaces, said architect David Manfredi. He added that due to the slope of the site, it would appear to be four stories tall at street level in places where the elevation is highest.

The project would also create 50,000 sq. ft. of open space in two parks, and have 25,000 sq. ft. of solar panels on the roof. The project is anticipated to generate $3 million in annual tax revenue to the Town of Watertown.

Along with the changes on the site, developers would pay for upgrading technology of the traffic signals in Watertown Square. The smart intelligence signals measure the volume of traffic going into the intersection and adjust the timing and phasing of the traffic signals to reduce waiting times and traffic backups, said Jeff Dirk, the traffic engineer from Vanasse & Associates.

The project also calls for re-routing Water Street so that it intersects Galen Street right across from Aldrich Road, about a block farther away from the Nonantum Road/Watertown Street intersection with Galen Street near the Charles River. This change would allow for a rerouting of the flow of the MBTA buses going into and coming out of Watertown Yard. Dirk added that moving the bus exit farther from Nonantum Road would take a phase out of the signal at that intersection and would cut the wait time. There will also be a crosswalk near the new Water Street intersection.

Town Council President Mark Sideris said he believes the project will make many big improvements to the area, which he said has become “somewhat blighted.” He added that he lives almost right across the street from the property.

“This provides so many benefits to this community, from the crosswalk, from the dedicated bus lane, to the traffic signalization upgrades,” Sideris said. “All these things are needed. It is not often when people come in and say we are gong to improve the traffic, not be a detriment.”

During previous meetings about the project, the owners of Farina’s brought up concerns about the loss of parking spots across from their store to make way for a dedicated bus lane along the northbound side of Galen Street.

Bob Doherty a vice president from Boston Development Group, said the garage at the new development would have spaces set aside for people going to the businesses across Galen Street, which includes Farina’s and New Ginza.

Paula Farina said she generally supports the project, and she appreciated the spaces being set aside in the garage, but remained concerned about losing public parking spaces in the Watertown Square area. She added that while the project has 277 parking spaces, there are supposed to be 1,300 employees. She asked Town officials to find a way to add more public parking in the Galen Street area.

“I am begging you be creative, talk with the MBTA and see if part of their lot can be turned into municipal parking of everyone in the community not just for me as a business,” Farina said.

Mike Farina, an owner of Farina’s, noted that the planned crosswalk would end right in one of the three parking spaces in front of Farina’s, which the store counts on.

Dirk detailed some of the project’s efforts to encourage employees of the new development to find alternatives to commuting alone in a car. They will offer incentives to make using public transportation or riding a bike cost-free to them. Typically, about 75 percent of workers would commute by car, Dirk said, and the goal is to reduce that number so less than 60 percent do so.

The Planning Board voted to recommend to the Zoning Board that they approve the project. They added conditions, including that the interior lights would be regulated after hours so they do not impact neighbors, and to address the problems with the crosswalk going into the parking spot in front of Farina’s.