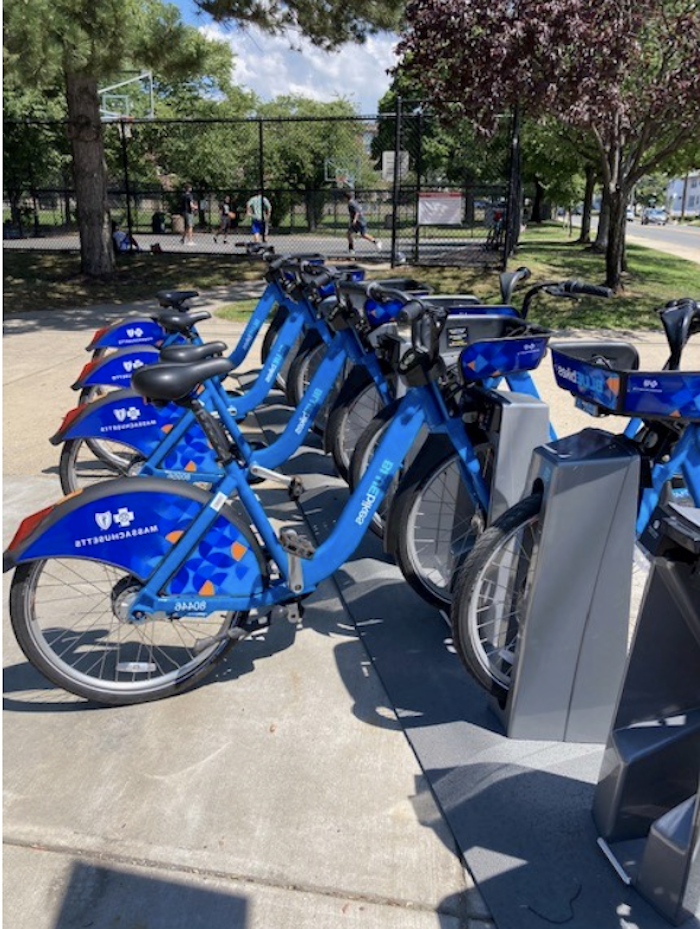 The Bluebikes station in Coolidge Square in East Watertown.

Watertown received a grant from the Mass. Department of Transportation to build a Bluebike station in Watertown Square and make other road and sidewalk improvements.

The $280,218 grant was part of the third round of the Baker-Polito Administration’s Shared Winter Streets and Spaces program. The bike share station is next to the entrance to the Charles River Path in Watertown Square. The project also includes flashing pedestrian safety beacons, curb extensions and ADA-complaint ramps at intersections in the Bemis neighborhood.

See the MassDOT announcement below:

The Massachusetts Department of Transportation (MassDOT) is announcingthe award of $3,236,762.78 in the third round of funding from the Baker-Polito Administration’s SharedWinter Streetsand Spaces program.The program, which was launched on November 10, provides technical and funding assistance to help Massachusetts cities and towns conceive, design, and implement tactical changes to curbs, streets, and parking areas in support of public health, safe mobility, and renewed commerce, with a special focus on the particular challenges of winter.

The awards made today will support 21 projects in 21 municipalities, of which 43% are designated Environmental Justice communities and 76% are considered high-risk for COVID-19 infections. Additionally, 62% of today’s winners have never received a Shared Streets and Spaces award before.

Together with Shared Winter Streets and Spaces grants made in December, the Commonwealth has invested $8 million in municipal Shared Streets projects so far. A total of $10 million has been allocated for this program.

The Shared Winter Streets and Spaces program provides grants as small as $5,000 and as large as $500,000 for municipalities to quickly launch changes for safer walking, biking, public transit, recreation, commerce, and civic activities. These improvements can be intentionally temporary or can be pilots of potentially permanent changes. MassDOT is particularly focused on projects that respond to the current public health crisis and provide safe mobility for children, for senior citizens, to public transportation, and to open space and parks.

The list of cities and towns awarded Shared Winter Streets and Spaces grants in this funding round are:

Types of eligible projects under the Shared Winter Streets and Spaces grant program include:

Applications are being accepted on a rolling basis, and decisions will be made in four rounds. Applications need to be submitted by:

Project completion and spending deadline for all four rounds is May 31, 2021.

Applicant municipalities are encouraged to engage the public in the development of Shared Streets and Spaces project ideas.

The Shared Streets and Spaces Program was established in June 2020 and was immediately popular with Massachusetts cities and towns. Through the program, the Baker-Polito Administration provided grants from $5,000 to $300,000 for quick-build improvements to sidewalks, curbs, streets, on-street parking spaces, and off-street parking lots in support of public health, safe mobility, and renewed commerce during the COVID-19 period.

Over 100 days, $10.2 million was allocated to 103 municipalities to implement 123 projects, from pop-up bikes lanes to safe ‘parklets’ for outdoor dining to improved crosswalks to dedicated bus lanes, as well as a range of traffic calming measures.

$10 million has been allocated for this phase of the program, which has a focuses on the particular challenges of winter.

Information about the Shared Streets and Spaces Municipal Grant Program, including information about how municipalities can access free technical assistance, can be found atwww.mass.gov/shared-winter-streets-and-spaces-grant-program.