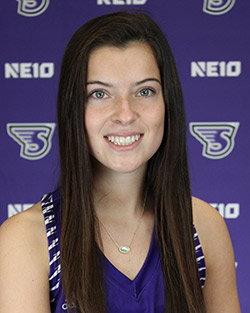 Stonehill Athletics sent out the following information about the NE10’s academic honors:

The Northeast-10 Conference has announced its Academic Honor Roll for the Fall 2020 semester, recognizing 333 student-athletes from Stonehill who have earned a semester grade point average of 3.00 or higher.

Out of the 11 women’s teams, two teams had 100-percent representation including women’s cross country and women’s tennis, while women’s soccer followed with 97-percent and softball saw 94-percent of its team on the honor roll. On the men’s side, men’s basketball led the way with 88-percent, as men’s cross country had 81-percent on the honor roll and men’s soccer saw 71-percent named to the list.

Among the 333 Skyhawk student-athletes named to the NE10 Academic Honor Roll, 21 earned a perfect 4.0 grade-point average. Women’s track & field led the way with four 4.0 honorees, with softball, women’s soccer, and football each had three student-athletes with 4.0 GPAs. Football senior Derek Ivey, who was named a semifinalist for the William V. Campbell Trophy® in October and is a CoSIDA Academic All-America® first team selection earns his third 4.0 semester. Junior Evan Kennedy from the men’s track & field team was most recently honored with the Conference’s Elite 24 award, the school’s third honoree. Kennedy has earned a perfect 4.0 four times in the five semesters in the Purple & White.

With 23 intercollegiate sports after announcing the addition of women’s swimming for the 2020-21 academic year and delaying women’s ice hockey until the 2022-23 year, Stonehill boasts one of the top athletic and academic programs in the country. Stonehill has won the Northeast-10 Conference Presidents’ Cup six times, all coming within the last 15 years after earning the award for the winter athletics season in 2019-20. The Skyhawks have received the NCAA Division II Presidents’ Award for Academic Achievement each of the first nine years of the program’s existence of honoring institutions with an Academic Success Rate (ASR) of 90-percent or better. Stonehill has earned a 95% Academic Success Ranking (ASR) by the NCAA, which considers the academic success rate of the institution based on the graduation rate of student-athletes, good for tenth among all NCAA Division II institutions, with nine Skyhawk teams receiving a perfect rating of 100%.