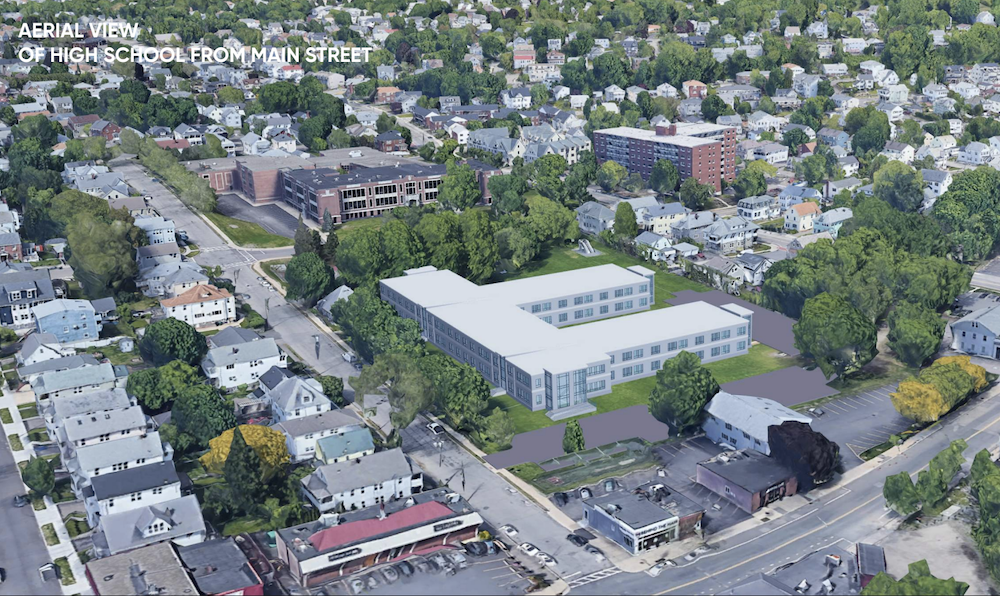 The School Building Committee told designers that they like the direction they are going with a single building on the current site for the new Watertown High School. That design would require students to go to a swing space during construction, and Moxley Field has been identified as the preferred temporary site.

The Committee voted last week to have designers keep working on the option known as 1H. Before the final proposal is submitted to the Massachusetts School Building Authority on May 5, the committee will look for input from the public at a Community Forum on March 24, a community meeting with residents of the area around Moxley Field (April 14 is the current date) and two School Building Committee meetings (on April 7 and 21).

Architects from Ai3 showed some new possibilities using a two-site option — the WHS site and the one across the street where the Phillips Building is located. The main academic building, including the gym and Career Technical Education program would be on the current high school site. An underground parking area would go under the main building, and a pedestrian bridge over Common Street would connect that building with the one on the Phillips School site.

The latest design included keeping the original Phillips School building, built in 1936, making a performing arts building on the property close to Spring Street, and building a new Senior Center on the site near Marshall Street. In the middle of the site could go a small public park, said Ai3’s James Jordan, with limited surface parking for users of the Senior Center including handicap accessible spots. An underground parking area would be included under the performing arts building.

That two-site option, called 3D-4.2, would take longer to construct and cost more than the single site option (1H). The estimated construction time for 1H is 30 months, while 3D-4.2 would take about 44 months. The cost of 1H is estimated at $184 million (including the swing space at Moxley) and the 3D-4.2 would cost $210 million, including the cost of building a new Senior Center and renovating the Phillips School for the school administration offices.

School Building Committee member Leo Patterson said he prefers 1H, in part because students won’t be on campus during construction.

“I don’t think the benefits of phased occupied construction can in anyway be better than the road we are going down,” Patterson said. “It will be much more painful, take longer and in the end probably cost more.”

Superintendent Dede Galdston said the 1H option, along with the modulars at Moxley Field, present the best option for the students.

“From the School Department’s point of view, we believe this is the most educationally appropriate option for us now,” Galdston said. “We are very excited about the possibilities it is affording us and our students.”

Town Auditor Tom Tracy, a School Building Committee member, said he likes option 1H because no students would spend their entire four-year high school career away from the high school.

Town Council Vice President Vincent Piccirilli, whose district includes the Moxley Field area, said option 1H is not perfect, but considering the shortage of spaces for a temporary swing space, and for a new school, it provides the best option.

“It is not perfect. Building two-story modulars on Moxley, I wish was a better solution, but there really is not a better solution,” Picirilli said. “This one is the shortest construction duration, the best option for students, and the shortest impact on the community — not just on the high school neighborhood and the Moxley Field neighborhood. For everyone in town. We are a small town.”

For option 1H to work on a 30 month schedule, WHS would have to move into a temporary building made up of modular classrooms. The school would use the Moxley site for three years.

Last meeting, architects presented a plan to create a two-story campus using modulars. The rooms would all be air conditioned, Jordan said, and the science labs would be state of the art. Watertown may be able to get labs used by Wellesley College during a construction project. The high school would also have use of the basement area of Watertown Middle School, which lies across the street from Moxley Field. The area includes classrooms and a small gym. The tennis courts, play structure and a small grassy area would remain while the modular campus is in use, Jordan said.

Watertown Middle School need to find new space for some programs and offices at the middle school, including a special education classroom, a physical education teacher station, an office for a social worker and a fitness room.

Neighbors living near Moxley worried about the added traffic in the area of the Middle School. Jordan said the current plan is to continue to have middle school drop-off along Bemis Street and have the high school drop-off on Westminster Avenue.

Galdston said the administration is looking at starting the middle school and high school at different times to prevent a traffic crush in the area.

The Moxley site would have about 100 parking spaces, which is enough for the faculty and staff. Other residents wondered if students would be parking on neighborhood streets. Principal Joel Giacobozzi said that few students drive.

“Those that do carpool,” Giacobozzi said. “They are used to having almost no parking now, and they know they will be ticketed if they park nearby.”

Other residents asked what would happen to the school and youth sports teams that use Moxley Field while the field is used as the temporary high school site.

Galdston said a plan has not been created for the teams that use the field, which includes WHS junior varsity baseball team, but she said Athletic Director Ryan Murphy would make arrangements by 2023, when the field would be turned into the space for modulars.

School Committee member Lindsay Mosca said she would like the district to look at what it would cost to use sod on the field after the modulars are removed, rather than growing grass from seeds, so the field can be used sooner.

“Because green field space is such a premium in town, it is an important thing for this committee to consider. Not just school sports, but youth sport use them and have high participation a small town. They would be impacted,” Mosca said. “If we could have sod and recover faster it could be a big benefit for the town.”

Town Council President Mark Sideris, the chair of the School Committee meeting, said residents and parents can bring up their questions and concerns during the community forum on the high school on March 24 at 6 p.m. (click here for the agenda and info). Another meeting will be held for Moxley Field area residents, and is currently scheduled for April 14.