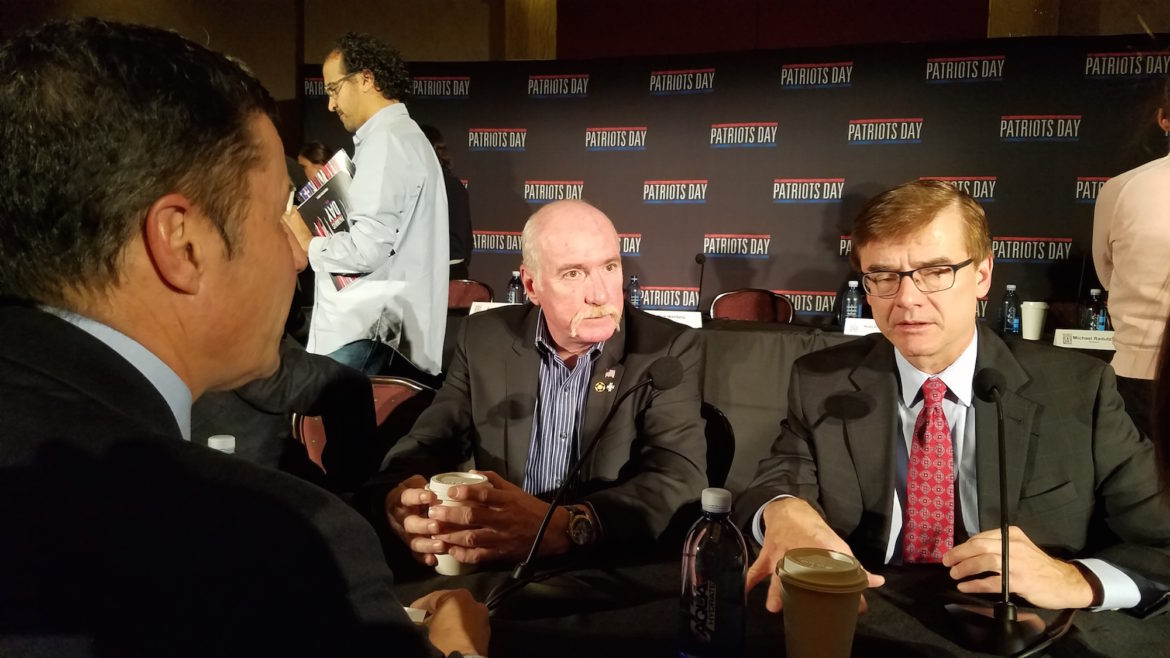 Watertown Police Sgt. Jeff Pugliese is interviewed along with FBI Special Agent in Charge Richard DesLauriers at the press conference for "Patriots Day."

Watertown Police Sgt. Jeff Pugliese is interviewed along with FBI Special Agent in Charge Richard DesLauriers at the press conference for “Patriots Day.”

The past several months have been a whirlwind Hollywood experience for Watertown Police Sgt. Jeff Pugliese.

As one of the Watertown Police officers who faced off in a firefight with the Boston Marathon Bombers, Pugliese is portrayed in the movie “Patriots Day,” by veteran actor J.K. Simmons.

Wednesday night, Pugliese and his wife attended the first Boston premiere of the movie (which stars Mark Wahlberg) at the Wang Theater, and before Thanksgiving the couple was whisked off to Los Angeles for the premiere.

“We got the red carpet treatment in L.A. It was an experience,” Pugliese said. “My wife and I got our picture taken in front of the screen with all the names of the companies.”

Despite facing off with terrorists in a life-and-death confrontation, Pugliese said he never thought he would see someone playing him on the big screen.

“We’re just the guys who showed up,” Pugliese said in a phone interview. “Whoever thinks they are going to be a character in a movie, putting you up on the screen for something you did? It is something that never entered my mind.”

Simmons, an Oscar winner for his role in “Whiplash,” did a good job capturing Pugliese’s speech and mannerisms, said Pugliese.

“We probably spent 60 to 70 hours together. He wanted to get my personality, my character. We’d be riding around and he really wanted to practice the voice and accent.”

“He’s a real down to Earth guy, a nice guy. We’re still in touch,” Pugliese said.

Simmons took Pugliese and his family to a Red Sox game for Pugliese’s 60th birthday, and the actor still texts him from time to time. 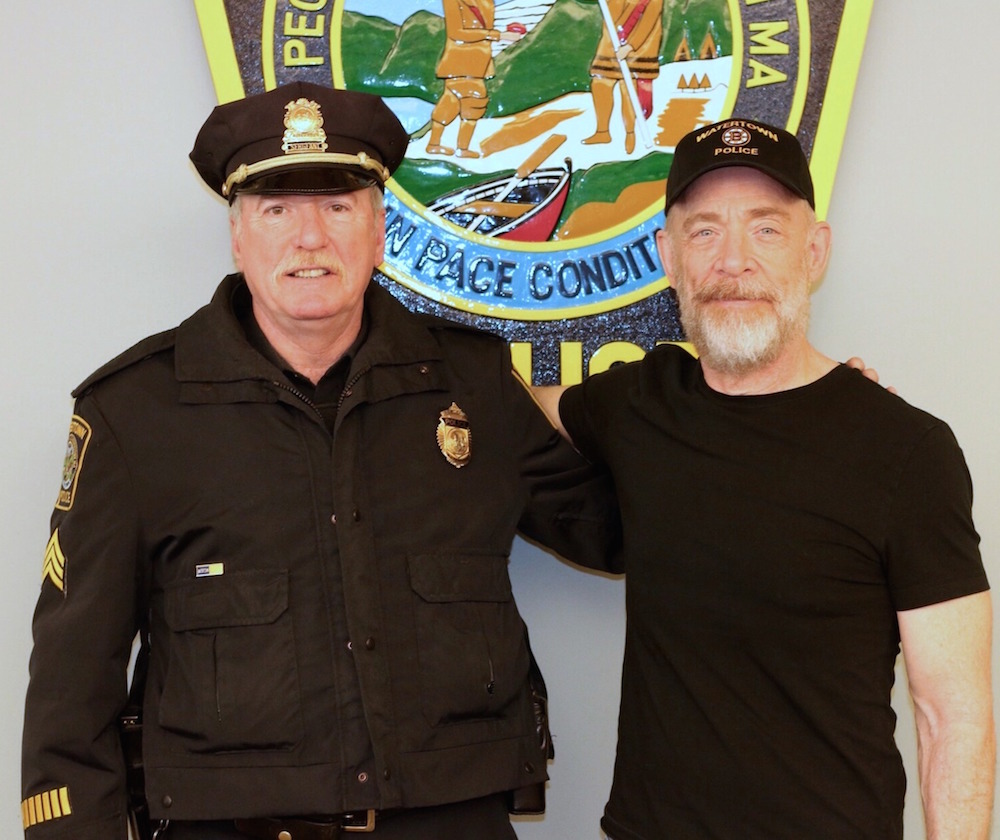 Oscar winner J.K. Simmons, right, poses with Watertown Police Sgt. Jeffrey Pugliese, one of the officers who faced the Tsarnaev brothers in the Watertown Shootout.

Pugliese called Simmons a “sponge” because of how he soaked up information. One detail Simmons spotted was Pugliese’s practice of leaving his cigarette on the wall outside Dunkin’ Donuts before going in to grab his morning coffee and breakfast.

“I didn’t think a thing of it until I saw it in the film,” Pugliese said Wednesday at the Patriots Day press conference.

Pugliese took Simmons on patrol around Watertown to give him a feel of what being a police officer is like. He also taught him some tools of the trade.

“I took him to a firing range and taught him to shoot a pistol, and how to reload in a combat situation,” Pugliese said.

One of the key scenes of the film shows the shootout on Laurel Street in Watertown when police encountered the Tsarnaev brothers.

In the early hours of April 19, 2013, Pugliese was leaving the Watertown Police Station after finishing up his reports when he heard that his fellow officers were under fire and needed help. He raced to East Watertown in his family minivan. The attack had been going on for a few minutes already and would last more than eight, in all. The scene in the movie lasts as long as the real incident.

When Pugliese arrived a pressure cooker bomb went off just 30 feet from him.

“I felt the concussion and a burst of white smoke from the pressure cooker,” Pugliese said after the press conference.

Then he flanked the Tsarnaevs by running through back yards and encountered the older brother, Tamerlan. They shot at each other as they stood just 6 to 8 feet apart, yet neither went down.

“I still don’t know how he missed me,” Pugliese said, saying an arc of bullets was found on the exterior of the house behind him. “Ultimately, I shot him nine times. He was shot in the side and a bullet shattered his femur. He didn’t want to go down. He took off running and I had to take off after him and tackle him.”

Pugliese said the director and producers relied heavily on the people who were there to get the scenes right.

“The director, Peter Berg, and even Mark Wahlberg, when they were filming they would say, ‘Stop!’ in the middle of a scene and say, ‘Jeff, what do you think about this?'” Pugliese said. “They really wanted to get it right. It was pretty accurate.”

While not all scenes were filmed at the actual locations, Simmons shot some scenes at Pugliese’ West Watertown home, as well as at the Dunkin’ Donuts on Main Street where Pugliese goes each day. Plus, they borrowed something from Pugliese for the filming.

“They had my van in the movie. They had my minivan for a month and gave me a rental,” he said. “At the time of the incident, it was less than a year old.”

When he attended the premiere on the West Coast, Pugliese saw how it impacts the audience.

“When I was out in L.A., people were crying when they saw it,” Pugliese said.

Hollywood Turns Watertown Into a Film Set for ‘Patriots Day’

Find Out Why the Helicopters Were Flying Around Watertown This Weekend

‘Patriots Day’ to Film in Watertown, Studio Donating to Town to Hire a Cop