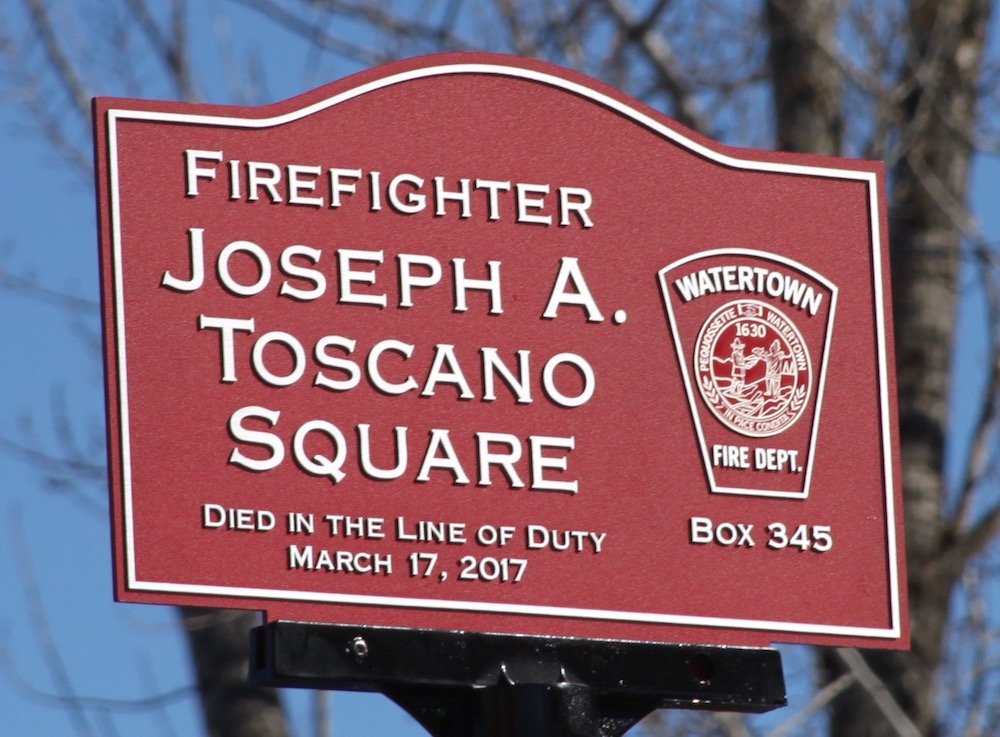 The sign erected in honor of fallen Watertown Firefighter Joseph Toscano at the corner of Merrifield Avenue and Bigelow Avenue in East Watertown.

For many years, squares and intersections in Watertown could only be named for a veteran. The Town Council voted Tuesday night to create a policy for naming squares after non-veterans.

The Council followed the recommendation of the Public Works subcommittee, which looked at policies from several area communities. They decided that Belmont’s was the one that was closest to the policy they would like.

“The committee liked the simplicity and effective language,” said Council Vice President Vincent Piccirilli, a member of the subcommittee.

Naming a memorial or square after veterans has a separate policy. In order to qualify the veteran must be a Watertown resident at the time of enlistment in the armed forces, and either be killed in action (KIA) or be a Medal of Honor recipient.

In 2018, the Town dedicated the intersection of Merrifield and Bigelow avenues to Joseph Toscano, the firefighter who died fighting a fire near that intersection in 2017. Though Toscano wasn’t a veteran, the Town Council passed a special resolution to allow the memorial. The Town, however, did not have a formal policy for non-veterans.

The new policy for non-veterans gives the sole authority for approving for who can name squares with the Town Council. The policy states:

“1) The Town Council understands that said naming may have long-lasting effect and will span future generations whose perceptions and values might change. 2) The Town Council intends to be cautious exercising this Policy to avoid over-naming Squares or Intersections.”

Councilor Lisa Feltner asked if squares for people who are living, or if they had to be deceased. Piccirilli said the subcommittee recommended leaving the decision up to the Council considering the proposal.

“The committee discussed that and felt that decision up to the Council to decide for each specific individual (proposed to name a square after) if it was appropriate or not,” Piccirilli said. “We tried to make it as simple as possible.”

The policy allows residents to propose in writing that a square or intersection be named for “a notable non-veteran with specific ties to Watertown.” It must be submitted to the Town Council President with documentation supporting the rationale and “showing a broad level of community backing.”

If the Council President believes the proposal is complete, he or she will put it on the Council’s agenda for a referral to the Public Works Committee. The Department of Public Works will review the proposal and provide an analysis of the proper signage for the intersection to the subcommittee.

The Public Works subcommittee will then review the proposal and the information from the DPW, and make a recommendation to the full Town Council. The final step is for the Town Council to vote on the proposal.

When making the decision, the policy sets out the following criteria for the Council to use:

a) The public interest to be served by honoring the individual
b) The leadership role or distinguished service of the individual, considering the quality of contribution along with the length of service
c) The association the individual has with the proposed naming location

The Council can also review squares after they have been named to see if the name should be removed. The policy states:

“The Town Council shall have sole authority to remove the naming of any
Square or Intersection if, with the passage of time, it determines the public interest is no longer being served.”