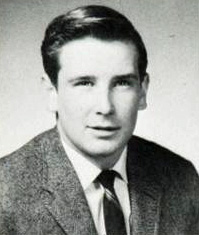 Paul Gorman, a Watertown Marine killed in Vietnam, will have a memorial in his name on Main Street at Emerson Road.

The following piece was provided by Jim Prendergast, a friend of Paul Gorman:

Today, July 30th, we remember Marine PFC Paul Gorman, who gave his life for his Country fifty-two years ago.

Paul grew up on Emerson Road, attended St. Patrick’s grammar school and graduated from Watertown High in the Class of 1966.

He enlisted in the U.S. Marine Corps in September 1967 along with 10 other Watertown young men. After training, Paul arrived in Vietnam on May 4, 1968 as a member of Golf Company, 2nd Battalion, 4th Brigade, 3rd Marine Division.

Paul was killed in action on July 30, 1968, four days after his 20th birthday, while engaging the enemy in a firefight in Quang Tri Province, just below the DMZ near the Khe Sanh combat base.

Last year, through the efforts of Watertown’s Veterans Service Officer, Patrick George, Paul’s sister Bonnie, the Shutt Detachment of the Marine Corps League of Watertown and Paul’s Marine Corps Brothers, a memorial plaque was dedicated his honor at the corner of Main Street and Emerson Road.

We must never forget the names of those who made the ultimate sacrifice – heroes all!Semper Fidelis